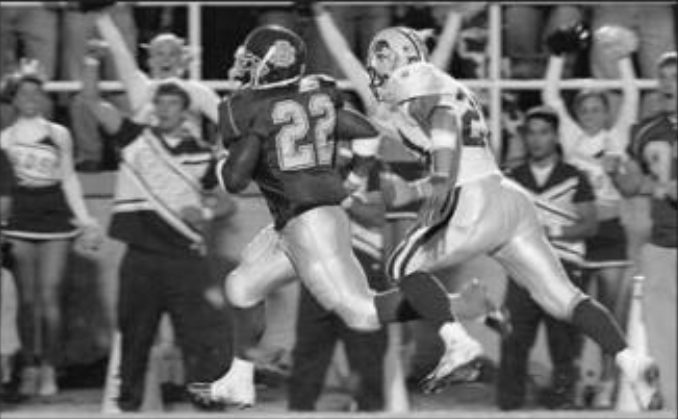 This Saturday at Coughlin Alumni Stadium in Brookings, SD, the North Dakota State Bison (4-1) and the South Dakota State Jackrabbits (3-2) will do battle for the 91st time.

The rivalry between the two teams has been alive since 1903. However, this meeting will be the first time that the two will meet under the I-AA umbrella and the first as members of the new Great West Football Conference. Also this year, the two will play for the first time for a trophy: the “Dakota Marker”.

The “Dakota Marker” is a quartz trophy in the likeness of markers used to show the previously disputed border between the two states. At one time, the two states were joined together as the Dakota Territory.

I know this game is supposed to be a new, big rivalry game for the two newest I-AA squads but it just doesn’t feel like it to me. As many of you know, I am a NDSU alumnus and have witnessed four meetings personally between the Bison and the Jacks over the years (and I will be at this year’s meeting as well).

That rivalry theme on this game may change in the future but the feeling is just not there right now and in talking to many fans of both the Bison and the Jacks, they don’t feel it either.

Why can’t we feel the rivalry between the Bison and Jackrabbits?

First of all, in my four and a half years (five football seasons) as a NDSU student and into my post-college days, the SDSU game has never seemed any more special then playing Nebraska-Omaha or St. Cloud (MN) State (two other North Central Conference schools — NDSU’s and SDSU’s former D-II conference home).

NDSU did lose to SDSU once while I was attending NDSU but it might be considered somewhat of a fluke. The year the Jacks beat the Bison, NDSU was down to their second string quarterback and had several other injuries and SDSU won 42-30.

So it’s not what you would call a balanced rivalry — even though the two teams over the 90 meetings have NDSU leading just 49-36-5. So historically overall, it does not look so much in SDSU’s favor.

Second, SDSU has never been considered a “football school” by NDSU fans or any fans associated with the school and thus rarely were ever considered a threat to defeat the Bison.

Sure, the Rabbits could win six or seven games some years but were almost never considered contenders for the Division II playoffs.

SDSU’s lone D-II playoff season was 1979 — a first round loss to Youngstown State.

NDSU, on the other hand, competed in 17 D-II playoff years and won five national titles (and three College Division titles prior to the NCAA Divisional system).

Third, even though SDSU and NDSU have met 90 times in the past, both schools already had in-state rivals that were more contusive to rivalry games.

NDSU and the University of North Dakota Sioux had met 110 times and was the longest running Division II rivalry before NDSU jumped up to I-AA play this season. The two North Dakota based schools played for the Nickel Trophy, a large Buffalo nickel:with a buffalo (Bison) on one side and a Native American (Sioux) on the other side.

While NDSU moved up to I-AA this season, the UND decided to stay at D-II. The two teams do not play this season and no plans for a future date have been made. UND defeated NDSU last year 21-14 in overtime. This win bolted the Sioux to a 62-45-3 overall edge over the Bison.

Now that was NDSU’s rival!

I don’t know many NDSU fans that liked anything that UND did related to sports or otherwise. In fact, smack talk between the two schools’ fans still remains even though the two will not play on any of the major college sports’ playing surfaces.

On the other side, SDSU and its more natural rival, the University of South Dakota Coyotes have met 104 times with USD holding a 50-47-7 edge. SDSU and USD did not play for a traveling trophy but was considered the biggest football game in the state of South Dakota each year.

USD, like UND, decided to stay in Division II play. Also like UND and NDSU, the Jacks and Coyotes will not be playing this year either and no game is scheduled in forthcoming years.

SDSU defeated USD in their last battle a year ago, 22-11.

Now, that was SDSU’s rival!

SDSU and USD fans may not have quite the animosity towards each other as NDSU and UND but there is certainly a strong dislike between the two schools.

NDSU AD Gene Taylor said at the trophy’s unveiling last April, “Since the two schools have been working so close with each other, it is hard to dislike the other school.”

Not disliking your opponent usually doesn’t lead to a rivalry. Not liking the other school or its sports’ teams is usually the best way for a rivalry to brew and we just don’t see NDSU and SDSU not liking each other now.

Will this NDSU-SDSU game ever feel like a rivalry?

Predicting the future is never easy to do but the longer NDSU and SDSU are away from their respective former rivals, the more likely they are to become rivals out of necessity.

The old saying, “time heals all wounds”, could be reversed for budding rivalries. Time may wound all pleasantries.

The two schools have much the same base recruiting area of Wisconsin, Minnesota, Nebraska and the two Dakotas, so that may be a spark that the two Dakota schools could use to get the rivalry going.

The two schools likely will be travel partners in whatever all-sports conference they are accepted in the future (Big Sky or Mid-Continent). This may not lead to a football rivalry directly but having all sports against one other team may lead to more of a hatred for the opposing team.

Also, the proximity between the two university cities of Fargo (NDSU) and Brookings (SDSU) is just 190 miles. Most rivals are within driving distance from each other for visiting fans to go to the game. This distance can only be a plus for this Dakota rivalry.

And playing close games and games that are not one-sided in terms of victories will likely lead to a more spirited rivalry. NDSU winning 25 of 28 games does not make for a strong rivalry. But seeing more alternating wins between the teams could lead to more attention being paid to this game.

Now, maybe this Saturday we will see something in the game action that will spark the fledgling rivalry between NDSU and SDSU. Maybe a big hit by one team will cause a rallying cry by the other members of that team. Maybe a last second field goal to win the game will be seen. Maybe we will see fans on chat boards bickering against each other instead of being supportive of the other team. Maybe, just maybe, we will eventually see a true rivalry and maybe it will start at the kickoff or some time during the game this weekend.

And if any of these things fall into place, maybe we will eventually notice the “Dakota Marker” compared to the old “Nickel Trophy” as a top-notch rivalry game in the Dakotas. As a I-AA West supporter and alumnus of one of the schools, I certainly hope something happens to spark this NDSU-SDSU rivalry. The game as of now certainly needs a big kick-start.