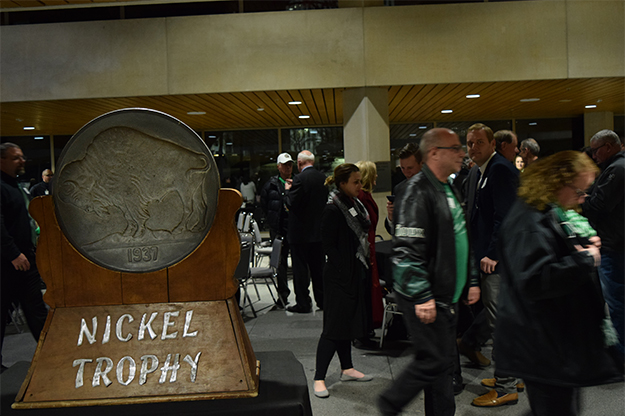 In the Dakotas, there is one fall Saturday every year when each of the states stands still to watch one football game.

No more Nickel Trophy game (given to the winner of the UND/NDSU contest).

The UND/NDSU contests began in 1894 and had been continuous since 1919 (aside from two years during World War II). In total, the two schools have met 110 times.

The Nickel Trophy is a replica of the Buffalo Nickel first awarded in 1938. It is 250 times the size of the actual nickel and weighs 75 pounds. With the “Bison” buffalo on one side and a “Sioux” Native American head on the other, it is a natural prize. The trophy resides now in Grand Forks, home of the Sioux of UND after their 28-21 victory last year over the Bison.

The SDSU/USD rivalry is not quite as long running but still is very impressive. These two schools have met starting in 1889 and have played 104 times since then.

Why are the teams ending their long running rivalries? Both NDSU and SDSU are in the process of moving up to NCAA Division I (I-AA in football), while the University of North Dakota and University of South Dakota are remaining in Division II. UND believes that since NDSU will have higher scholarship numbers (maximum 63 for I-AA and 36 for D-II) that they can not compete with their in-state rivals.

University of North Dakota athletic director Roger Thomas stated at a press conference February 10th when releasing the UND schedule, “Do we want the rivalry (with NDSU) to stop? No, not at all. But let’s remember where this stems from and what caused the change (alluding to NDSU’s move to I-AA).”

NDSU AD Gene Taylor also commented on the ending of the rivalry. “Certainly, it (not playing UND) is disappointing but we knew as we moved to Division I this had a potential to happen. We just didn’t think it would happen this soon.”

USD and SDSU had a different set of circumstances. SDSU and USD were scheduled to play in 2004 but could not meet on any one proposed date for a game in Brookings.

The D-II playoff team number is changing from four to six per region in the 2004 season. UND was the runner-up in Division II a year ago and as the Division II playoff criteria reads now, playing an I-AA school counts actually against a team’s DII playoff chances. Playing a fellow D-II opponent counts more in both in the win and loss category than playing any I-AA opponent. That’s regardless of record in D-II’s point scale for determining the teams from each region that make the playoffs.

UND Head Coach Dale Lennon commented, “The bottom line is when I asked myself, ‘Could playing North Dakota State help us?’ and the answer came back ‘no.’ Playing NDSU could actually hurt us.”

Other schools have had similar fates where one school has moved up while the other remained at the current level. Why can’t this trend continue for the Dakota rivals?

As was mentioned before, the Division II schools feel as if they aren’t on equal footing with NDSU and SDSU. However, past results of similar teams moving up contradicts this statement.

Sacramento State moved up to the I-AA ranks in 1993. Their long running rivals across town in UC-Davis decided to stay put in D–II. However, these two schools remained rivals in the Causeway Classic and have not missed a year even though UC-Davis remained D-II and were under the D-II playoff criteria in their final year (in 2002) of D-II play. UC-Davis still made the Division II playoffs that year. UC-Davis also held a 9-2 record advantage in that time frame.

Also, Montana and Idaho remained rivals albeit after three years of not playing when Idaho moved up to the I-A ranks in 1996 and Montana stayed at I-AA. Montana had the better of Idaho in those meetings winning four out of five matches.

Are there any rivals left for the two Dakota schools? Yes, for South Dakota State at least for this up coming season, they will be playing Augustana College for the 60th time (first meeting in 1946). Augustana will remain as a member of the North Central Conference (NDSU’s and SDSU’s former conference). Augustana is in Sioux Falls, SD and has agreed to play the Jackrabbits in Brookings this fall.

Augustana head coach Jim Heinitz, who is an SDSU alum, commented, “Every team in the (D-II) NCC has a bye (in 2004), and we wanted to play someone of quality. SDSU was open and we were open, so it was good for everyone. I believe it’s a good idea to maintain that rivalry.”

However, this rivalry looks to last just one more continuous year. Augustana athletic director Bill Gross commented, “We had the open date this season and will play South Dakota State there in Brookings but it is unlikely we will play SDSU again in future years.”

NDSU and SDSU have each other scheduled in Brookings this year. A rivalry between the two land grant colleges of the Dakotas has never really bloomed even though the two have met 89 times since 1889 but a rivalry may be brewing.

Will we ever see the two big Dakota football rivalries ever again? Most fans on both sides will say yes to this question, but it is more of a question as to when. Many believe that once NDSU and SDSU become established members of the I-AA ranks, their former rival schools will have to follow suite to stay competitive for fans, recruits, and notoriety.

USD and SDSU seem more likely to meet in the future as they would have played this fall if open dates would have coincided. However, SDSU would like to play in Brookings one season and then in a neutral site, Sioux Falls, the next. It is unclear if USD would support not having a home game in the series, while SDSU does.

The UND/NDSU rivalry seems less likely based on statements made by UND’s Thomas. “We thought long and hard about this. But it seems to all of us that if you’re going to have a rivalry and you want a great one, to play it on a level playing field makes a lot of sense,” said Thomas.

In addition, there have been talks of eliminating the penalty for a D-II team playing a I-AA team in regards to the D-II playoff selection criteria. An April 2004 meeting of D-II schools has this change slated to be discussed. This could open the door for the rivalries to continue and not hamper any playoff chances.

Who is to blame in not continuing the rivalries? As with most rivalries, one side blames the other for the game’s end.

NDSU’s AD Gene Taylor gave a two year home and home agreement to continue the rivalry but it was never signed by UND for the reasons listed before. The 2004 game would have been in Fargo and the 2005 game in Grand Forks.

SDSU also had a similar deal with USD but would have played in Brookings, home of SDSU and in the neutral Sioux Falls as was mentioned earlier but common dates could not be found. Vermillion is the home of USD. Sioux Falls is about halfway in-between Brookings and Vermillion.

Who will the two I-AA provisional teams schedule to make up for their lost rival games? Both NDSU’s and SDSU’s schedules have not yet been completed but both have scheduled games against teams from the proposed new Western based football conference and against some of I-AA’s traditionally strong schools. NDSU has Cal-Poly as a home game and UC-Davis, Northern Colorado, St. Mary’s (CA), and SDSU on the road. Also, the Bison have recently successful I-AA Northwestern (LA) State coming to Fargo. SDSU has NDSU and their old D-II rival Augustana along with two other fellow D-II opponents, Western Oregon and Winona (MN) State at home. The Jackrabbits will travel to UC-Davis, Northern Colorado, St. Mary’s, and Cal-Poly from the proposed new conference. The Jackrabbits also will travel to established I-AA schools Montana State and Georgia Southern.

All blaming aside from both sides in these two rivalry games, the fans are the ones that really get hurt by the schools not playing. Many alumni gatherings across the country, which have been traditions for alumni from all the schools for a number of years, showing the game via satellite television, will not happen in 2004. Many fans are fans just for that one day. Now, those three hours of which the two Dakotas shut down on one fall Saturday will have to wait at least until 2005 to shut down again.