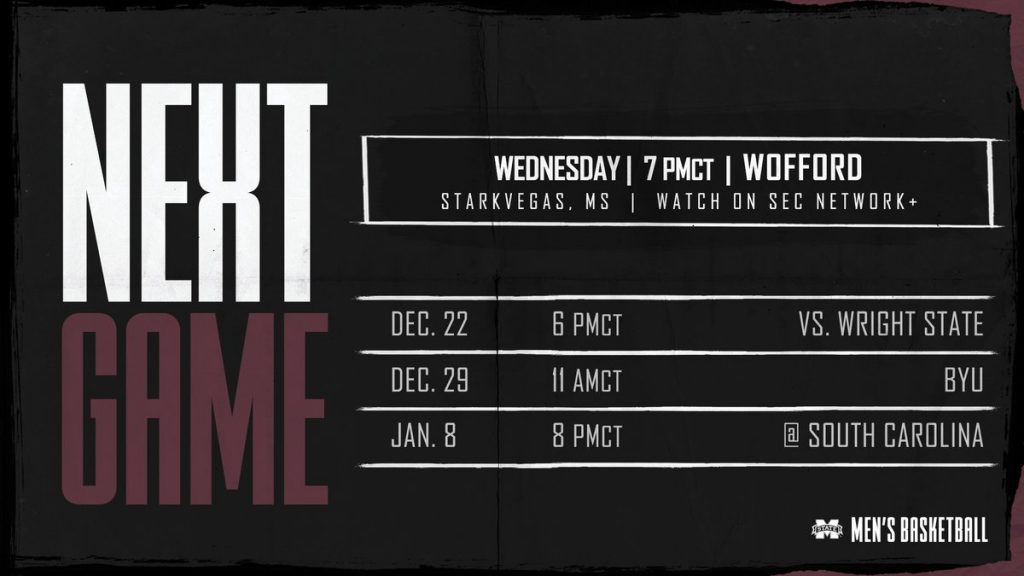 Wofford enters Wednesday’s matchup riding a three-game winning streak, dismantling UNC Asheville 92-49 on Saturday. Not content to sit idly by while Southern Conference leaguemate Furman steal the limelight, the Terriers head to Starkville, Mississippi this week to face their fourth Top 50 Sagarin opponent of the season.

Wofford is averaging just under 82 points per game (81.8) while giving up just 61, ranking the Terriers 10th in the nation in scoring margin and 15th in scoring defense (as of 12/17). 3 point shooting continues to be a strength of the Terriers, hitting 10.6 per game (15th in Division I).

Key Fantasy Player: G Fletcher McGee (17.3 ppg, 3.2 rpg) is the senior 3-point gunner that paces the Terriers’ scoring. Though Wofford is a lot more than McGee – F Cameron Jackson is a power underneath, and G Storm Murphy is a solid ballhandler – McGee is such an accurate weapon and the guy to build lineups around.

Wednesday’s matchup marks the first with Wofford. The Bulldogs have posted a 42-14 record against current members of the Southern Conference which includes a 25-6 mark against Samford and a 6-4 record against Chattanooga.

This is a game for those who love long-distance shooting. Mississippi State has connected on 45 three-pointers during its last three games highlighted by a program single-game record 19 treys during the Clemson game on Dec. 8. The Bulldogs have hit 10 or more treys in three straight games on five occasions since the 2004-05 season.

Key Fantasy Player: 6’10 F Aric Holman headlines one of five returning starters on this deep, talented Bulldog team. Holman is the Swiss Army knife on the team, able to pull up for 3 while still being able to get inside and add blocks (22 on the year) . He averages 8.7 boards a game and averages 10.3 ppg, even though he averages only 28 minutes a game. He could feast on Wofford’s frontcourt.