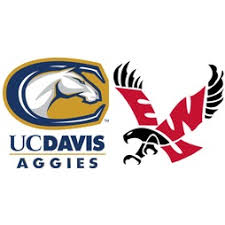 UC Davis sits in first place in the Big Sky with Eastern Washington, Weber State, and Idaho State all one game behind. An Aggies win on the road would clinch at least a share of their first-ever Big Sky Conference title. The Aggies are the only undefeated team within Big Sky play remaining this year.

The title would be the first for the Aggies’ first conference crown since 2009 when it competed in the Great West Football Conference.

UC Davis has only lost once and it was to FBS Stanford. Aside from that loss, the Aggies have scored at least 42 points in each of its eight wins.

The Aggies defense has not been bad in the score-happy Big Sky either. UC Davis’ defense is holding its opponents to a 26.0 ppg average.

This game is the seventh meeting between UC Davis and Eastern Washington, and the fifth to take place on the Eagles’ turf. UC Davis dropped all six previously played games vs. EWU.

Player to Watch: RB Ulonzo Gilliam has 581 yards rushing. His season high of 132 yards came Week 1 at FBS San Jose State. Gilliam also has scored three touchdowns this season. A key for the Aggies against the stiff Eagle defense will be to balance is potent passing attack with a strong running game.

Fantasy Bonus Baby: WR Keelan Doss leads the Aggies with 79 receptions. Doss had 103 yards receiving last week in the win over Northern Arizona (42-20) and has 790 receiving yards for the season. Look for him to contact often with QB Jake Maier (2,716 passing yards, 27 TDs) especially if the running game can come together.

The Eagles or the Aggies with a loss likely will still be in the FBS playoffs but a win means a likely seed and bye for the first round.

This is the last regular season home game for EWU and will honor 27 players on Senior Day, and they’ve combined on 411 starts and 967 games in their careers.

Eastern Washington tops the Big Sky Conference on offense with at 530.7 ypg. The Eagle defense on the other side is second against the rush ( 144.7 ypg) and is tops in scoring defense ( 21.1 points per game).

Key Player: QB Eric Barrier accounted for 309 yards of offense and four touchdowns last week in the Eagles 48-13 win over Northern Colorado. He is in for Gage Gubrud, who was lost earlier with an injury for the season. But in a marque game like this, the questions will be if he can handle the pressure of this kind of game.

Fantasy Bonus Baby: WR Nsimba Webster leads the team with 742 receiving yards on 45 receptions. Look for him to get a number of receptions in this game and be a key outlet for Barrier.

Fearless Prediction: This game should have plenty of scoring but the key will be if Barrier can handle the pressure of this game. The Eagle defense has been key all season long but the Aggies’ offense gives them a huge challenge to stop. UC Davis has looked like the best team in the Big Sky all season long and has proven it can win tight games (two wins over San Jose State and Idaho State). This game will be tight to the finish but the Aggies have just more talent especially with the Eagles being without Gubrud. UC Davis 44 Eastern Washington 41