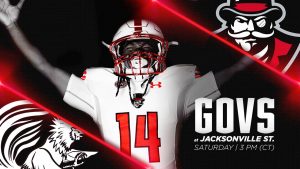 The Governors (2-2, 0-1 OVC) hit the road for the third straight weekend when they travel to Jacksonville State to take on the Gamecocks. The Govs are 1-1 on the road trip, and will be looking for their first victory in Ohio Valley Conference play.

Coming off of a game in which they held the OVC’s leading passer, UT Martin’s Dresser Winn, 75 yards under his season average, the defense is allowing just 169.8 yards per game passing, which ranks second in the OVC and 21st nationally.

The defense intercepted Winn twice on Saturday, bringing its season interception total to four, which ranks 29th in the country. The Govs have intercepted a pass in three straight games, and have forced at least one turnover in all four games in 2018.

Key Player: Austin Peay ranks second in the OVC and 14th in the country in rushing yards per game, churning out 266.5 yards per game on the ground. RB Kentel Williams leads the way 272 yards. He is one of four players that has crossed the century mark and one of six players with 90 or more yards on the season.

Fantasy Bonus Baby: Preseason All-American DE Jaison Williams has been in the backfield on a regular basis, racking up 6.5 tackles for loss – including 1.0 sack – on the season that have set opponents back 27 yards.

JSU has won its last 33 OVC games, the longest active conference winning streak in Division I. Grambling (SWAC) is second with 27 in a row. UCF (AAC) has the longest in FBS with 10.

Key Player:So far this season, the Gamecocks have 30 tackles for loss. Their average of 10.0 tackles for loss per game is tops in the OVC and is third nationally. They had 14 in the Sept. 8 win over Mississippi Valley State, tied for the eight-most in a game in school history. LB Jalen Choice currently leads the aggressive front seven with 3 1/2 tackles for loss.

Fantasy Bonus Baby:Junior WR Josh Pearson is off to a hot start to the 2018 season. The Decatur, Ala., native has opened the season with back-to-back-to-back 100-yard receiving games (8 for 147 and TDs vs. NC A&T, 2 for 113 yards and 2 TDs vs. Mississippi Valley State and 5 for 102 yards and 2 TDs vs. Tennessee Tech). Pearson is the first player in the school’s Division I history to open a season with three-straight 100-yard receiving games.

Fearless Prediction: It’s pretty much a do-or-die game for Austin Peay in terms of the OVC title race (and likely their playoff chances, too), but the Gamecocks are loaded and will give Peay’s running game fits. JSU rolls. Jacksonville State 35, Austin Peay 6