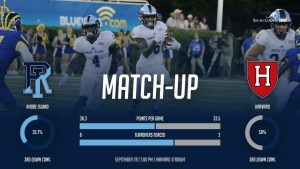 The surprising 2-1 Rams have made a Friday night tilt against the 2-0 Harvard Crimson into surprising must-see TV. Last year was Rhody’s first win over Harvard. The Rams beat the Crimson 17-10 at Meade Stadium. The all-time series sits at 3-1 in favor of Harvard.

Part of the Rams’ success has come from the transfer route. Junior linebacker Branyan Javier-Castillo (Lackawanna CC) is tied for the team lead with 23 tackles, including 2.5 tackles for loss, graduate senior Kadin Booker (Ball State) has started each game at right tackle, junior wideout Ahmere Dorsey (Nassau CC) had a 69-yard touchdown punt return against Albany, junior running back Naim Jones (Nassau CC) ran for 95 yards and a touchdown in his Rhody debut at Connecticut, and junior defensive end Keith Wells
(Lackawanna CC) has started every game and has six tackles, including one sack.

Key Player: QB JaJuan Lawson just continues to impress every week, and in his most recent game two weeks ago against UConn Lawson accounted for 436 yards of total offense and six touchdowns. Completed 23-of-34 passes for a career-high 351 yards and four touchdowns, it’s a bit scary to contemplate what he might do against the Crimson this week.

Fantasy Bonus Baby: WR Aaron Parker is a big reason why Rhode Island’s offense has been so prolific. He leads the Rams with 309 receiving yards, is second with 19 catches and he has caught at least one pass in 21 straight games.

The Crimson piled on the points in their first two games, putting up 36 at home against San Diego and 31 on the road against Brown. In what could become a shootout, they’ll be hoping to get past 30 points scored once again tonight under the lights.

Key Player: Harvard has been, unusually, relying on the run game this season with RB Aaron Shamkin shouldering the load on the ground with 271 yards and 4 TDs through two games. It seems like he’s going to be the bellcow back as the Crimson try to keep the ball out of URI’s hands.

Fantasy Bonus Baby: WR Justice Shelton-Mosley is Harvard’s dynamic receiver and return man, but he’s beel pretty quiet thus far, though he did have a kickoff return of 43 yards. Against URI’s improved defense, will he have the sort of breakout game many NFL scouts think he’s capable of producing? It seems like this could be a place for him to shine.

Fearless Prediction: I bet when Harvard set up this series, they weren’t counting on Rhode Island becoming the Delaware of the old Yankee Conference. It should be a very entertaining shootout, with the Rams ending up victorious. Rhode Island 44, Harvard 35