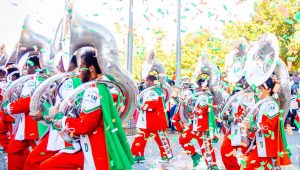 Additionally, both teams are coming off explosive performances, with the Spartans topping Delaware State 54-28 and the Rattlers rolling to a 55-14 win at N.C. Central last week.

This marks the first of three straight road games
where the Spartans play on their opponents’ Homecoming.

Key Player: The Spartans defense have been the key to Norfolk State’s strong start, with DB Nhyre’ Quinerly standing out as a having a tremendous nose for the ball and playing a part in 5 opponent turnovers – three interceptions, one forced fumble, and one fumble recovery. Overall through four games the Spartans have forced 10 turnovers and committed only 4 themselves.

Fantasy Bonus Baby: WR Isaiah Savage has emerged as a the primary target through the air of QB Juwan Carter. In the last two weeks, they have connected for 15 receptions, 156 yards, and 2 touchdowns.

Kickoff between the Rattlers and Norfolk State Spartans is slated for 4 p.m. However, campus activities begin just before daybreak.

The opening notes and steps for the homecoming parade will commence at 8 a.m. Officials will seal off Wanish Way beginning at 6 a.m. There is no official timetable as to when the barriers will be moved for vehicle traffic.

“We have a bunch of vendors set up along Wanish Way. The food vendors will be located in front of Gaither. All apparel vendors will run along Wanish Way to the tennis court. They’ll also be on the other side of Wanish in front of Howard Hall. There are also some vendors on Perry Street,” Kelvin Rosier, FAMU senior associate athletics director of facilities and events, told The Tallahassee Democrat.

FAMU officials are expecting a sellout crowd at Bragg Memorial Stadium. The capacity of the venue is 25,500. This isn’t including the foot traffic outside the facility.

Key Player: Phenom QB Ryan Stanley is a huge part of Florida A&M’s MEAC title dreams right now. Last week against North Carolina Central he threw for four touchdown passes as the Rattlers coasted to a 55-14 win over the Eagles. He’ll be hoping to keep the Rattler dreams going on Homecoming this weekend.

Fearless Prediction: Norfolk State’s 3-1 record has been aided by the fact that they’ve been playing at or close to home for most of their games. On Rattler Homecoming, though, it’s FAMU that will prevail and get to 3-0 in conference. Florida A&M 31, Norfolk State 17