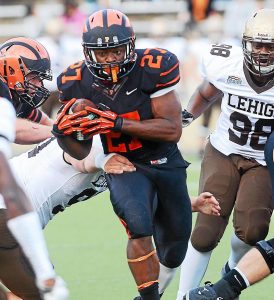 In Princeton’s game notes, their game with Lehigh is billed as a “local rivalry”.

It is true that the campuses of Princeton University and Lehigh University are reasonably close to one another, separated by about an hour and a half by car.

And though Princeton and Lehigh have never shared a conference, this will be the 60th time these two football teams have faced off against one another. It’s going to be a game that will be a big test for themselves before they reach conference play.

The one thread unifying all of these tussles, from the very first meeting in 1887 to the one happening this Saturday, is that the game is a serious “test” for both squads, a measuring stick for both teams before heading into their conference for the games that will determine their conference championships.

Both the 3-0 Tigers and the 1-3 Mountain Hawks seem to grasp that concept as nationally-ranked Princeton aims for a possible undefeated season while Lehigh looks to get set to try to win their third straight Patriot League football championship and potentially earn a third straight FCS Playoff spot.

History of the Princeton-Lehigh Rivalry

The story of these ancient local rivals began in 1887, only three years after Lehigh started their first intercollegiate football team.

Princeton had already played nearby Lafayette a couple of times in 1883 and 1884, and with Lehigh starting up a program of their own they were eager to add another small start-up program to essentially scrimmage against.

“In the first half, Lehigh made seven first downs and rushed the ball a distance of sixty yards,” The Princetonian reported after a typical matchup, this one a 60-0 win by the Tigers in 1903. “The Princeton defense strengthened however after the first ten minutes of play and was practically impregnable during the remainder of the game, Lehigh gaining a bare seven yards by rushing in the second half.”

In fact in those early years there was a stretch where Lehigh went 0-27-2 against Princeton, and shutting out Lehigh was basically expected.

“A general note of indignation and disappointment was sounded by the students at large,” The New York Times reported in 1889, “against the football team when the result of the game with Lehigh was telegraphed as 16 to 4. The students all thought that the score last Saturday was discouraging enough, but the climax was reached when it was learned that the Lehigh team had scored against the ‘Nassau Boys’.”

Lehigh’s first win against Princeton would come in 1930, when Austen Tate’s squad, having been shut out in three straight games against Gettysburg, Penn and Muhlenberg, would unexpectedly score two early quick touchdowns against a team that they had never beaten and make it hold up for a stunning upset.

One came on a 60 yard run by RB Charles Halsted, and the other came on a 66 yard interception return for touchdown by end Robert C. Clark, and then, despite coming nowhere close to scoring again, the Lehigh defense held up enough the rest of the way to preserve the victory. “Six times the Tigers drove their way inside the Lehigh 20 yard line,” The Brown and White, Lehigh’s student newspaper, reported, “and five times 20,000 spectators [at Princeton’s Palmer Stadium] saw a fighting Lehigh team drive them back to midfield.”

In more modern times, games between Princeton and Lehigh have been much more competitive. In the last ten years, the Mountain Hawks only hold a slim 5-3 advantage, with half the encounters determined by a margin of a touchdown or less.

Slowing Down the Tiger Machine

On one side of this rivalry, there is some huge momentum coming into this matchup.

If that weren’t intimidating enough, the Tigers haven’t allowed a second-half point yet all season – something that might take on extra significance, considering Lehigh’s inability to score a second half point against Penn two weeks ago.

Based on their first three games, Princeton is on the brink of a special season, and closing out their out-of-conference slate with a resounding, double-digit win over Lehigh would be the perfect jumping point to their goal of a 10-0 season and Ivy League perfection.

On the other hand, Lehigh enters this game 1-3 with three tough, challenging losses in a row to nationally-ranked Villanova, bowl powerhouse Navy and two weeks ago to Penn, 30-10.

DL Harrison Kauffman said this week that Lehigh used this week to refocus after that disappointing loss to the Quakers. “You get through camp, you get through all these things, and you lose sight that you have to come to play every single day,” the Kalispell, Montana native said. “This week was to bring it to practice, and off the field. Doing those little things right so on Saturday we can come out with the win.”

Harrison noted a “hunger” in this season’s team that he hadn’t seen in other teams to turn things around and get better.

This was echoed by Lehigh head coach Andy Coen to Keith Groller of The Morning Call.

“This is going to be a challenge,” Coen said. “Our guys know where they’re at right now and know what they need to do. We know this is an important game leading into the league opener. We’re staying positive. A lot of football is still to be played.”

“A win against Princeton would give us the opportunity to propel us more in the right direction,” he said on Facebook Live this week, “not only with energy but seeing a ‘W’ would be really good for team morale. It helps prove we are the real deal.”

Two teams trying to prove they’re the real deal before conference play starts – that’s the Lehigh/Princeton series in a nutshell.