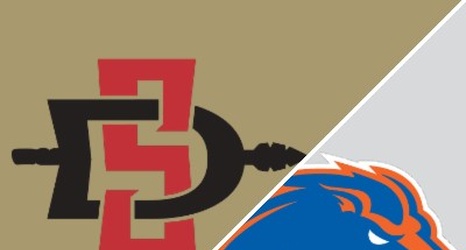 The Aztecs come into this game very banged up especially on offense. QB Christian Chapman has been out since suffering an MCL sprain against Sacramento State. OT Zachary Thomas tore an ACL a week later against Arizona State.RB Juwan Washington broke a collarbone against Eastern Michigan.

Where SDSU will try to keep this game close is with their defense. San Diego ranks third in the MWC in giving up 337 yards and 21.5 points per contest. The Aztecs rank second nationally in all of FBS in allowing 64.5 yards per game on the ground and 2.1 yards per carry.

Key Player: QB Ryan Agnew has filled in for Chapman under center with good results so far but now faces a tough Bronco defense. But in two starts, Agnew has thrown for 305 yards, three touchdowns, and one interception.

Fantasy Bonus Baby: RB Chase Jasmin has filled in for Washington and has done well so far. He has run for 233 yards in four games and is averaging 5.4 yards per carry. Look for him to have some good statistics both in running and receiving in this game.

Through the opening month of the season, Boise State ranks 26th in all the FBS and second in the Mountain West in total defense, yielding just 322.3 yards per game. Last week’s win at Wyoming also marked the second time in four games this year that the Broncos have held an opponent to under 300 yards of total offense, as the Cowboys managed just 295. The first such occasion came Sept. 8, as Connecticut totaled just 193 yards of offense.

The Broncos are using a number of receivers on offense and is a big factor for strong play on offense through four games. The Broncos are one of only five schools – along with Hawaii, Texas Tech, Washington State, and West Virginia – to have three different receivers rank among the top 100 FBS players in receiving yardage per game.

Key Player: QB Brett Rypien has thrown for 1,389 yards and 12 touchdowns while completing 70.1 percent of his passes after four games. He ranks second in the Mountain West in completion percentage and third in total passing yards.

Fantasy Bonus Baby: While three receivers are within the Top 100 nationally in the FBS, it is WR Sean Modster who has headed the team with 96.3 yards per game. Look for him and Rypien to hook-up a number of times in this game.

Fearless Prediction: Given the strength of both defenses, this game should be relatively low scoring. However, with the number of injuries for SDSU and the talent level of Boise State’s offense, along with playing on the blue turf in Boise, this game looks like a couple of score win for Boise State. I will take the Broncos by 10. Boise State 30, San Diego State 20