Week 1 in HBCU football saw quite a few upsets, but none was bigger than Howard going out west as a 40+ underdog and defeating UNLV.

In week 1 we saw North Carolina A&T flex its muscles and look like a serious contender for the MEAC crown, and we saw Southern show that they’re just fine after they’ve lost the conference’s all-time leading rusher and the school’s all-time leading receiver.

Week 2 gives us an opportunity for potentially more upsets and a step closer to clearing the path to the post season. This week we’ll look at the 8 most intriguing matchups in FCS HBCU football.

It was announced earlier today that the FIU/Alcorn would be played after being announced earlier that the game would be postponed. Alcorn State is coming off an efficient win at home against D2 Miles College, while FIU was taken to the woodshed by neighboring Central Florida. FIU gave up 587 yards to an explosive UCF offense and had given up 40 points by the half. The Alcorn State racked up 593 total yards and 50 points a week ago and now faces a less than stellar FIU defense. FIU recently has suffered two losses at the hands of an FCS squad and knows that the Braves are more than able to upset the Panthers. FIU has everything working against them, they’re traveling 817 miles for their first home game to a town where their FCS opponent has a huge alumni base and the opponent is a very talented Alcorn State squad. Could Alcorn State be the next HBCU to pull the upset over an FBS squad? I certainly like their chances.

What a wonderful time for the fan bases of both sets of Tigers. The City of Memphis and the Liberty Bowl has been the meeting ground for this Tiger Fight since 1990. Tennessee State has owned the series winning the last 5 meetings and 12 of the last 14 meetings. This year edition of this Historic Cat Fight sees to feature two programs going in opposite directions. Tennessee State is coming off of a win over FBS Georgia State and is ranked #24 nationally while Jackson State is coming off of a 63-0 loss to TCU and hasn’t tasted the sweet taste of victory since October 22nd of last year. A week ago Jackson State could only muster 65 total yards and 0 points against TCU. Jackson State looks completely outmatched but Jackson State usually shows up and gives their best effort when the show up in Memphis. Tennessee State is hoping to make the FCS-playoffs and a loss to Jackson State would damage the chances of the happening. The key to this game is running the football as the team that has won the rushing battle has won 17 of the last 19 contests. It will be a great time in Memphis this weekend with all of the excitement starting on Wednesday and it will continue through Sunday morning. Over 50,000 fans will pack the Liberty Bowl for this annual showdown and I expect the Tigers from Nashville to continue their dominance in this rivalry. 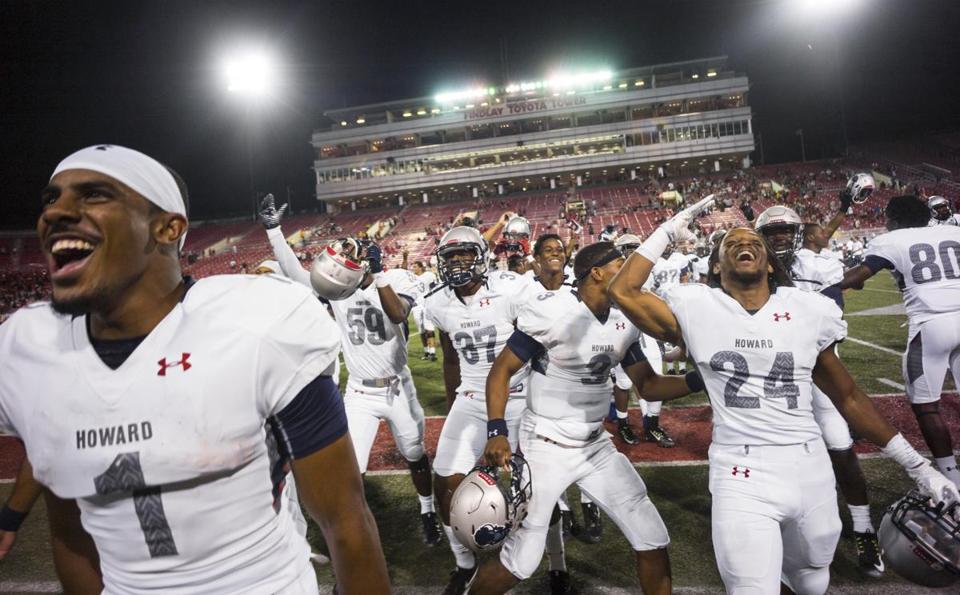 A week ago the Bison of Howard shocked the world by upsetting FBS UNLV. Howard has been trapped in the football doldrums since the days of the great Jay “Sky” Walker in the early 90s. Mike London signed with many called the best recruiting class in Howard University history with Caylin Newton being the cherry on top. A week ago Howard put up 449 total yards which is bad news for a Kent State defense that gave up 665 yards and over half a hundred points to Clemson. Kent State was beaten a year ago by North Carolina A&T of the MEAC and now fellow MEAC conference mate Howard rolls into town. Kent State couldn’t establish any type of offense a week ago and that must change if they’re to stop Howard from getting FBS win #2 and as many weeks. In order to pull the upset the Bison must not turn the ball over and limit the big play by the Golden Flashes offense. Keep an eye on this game come Saturday because it could result in another FCS over FBS victory for the MEAC.

The Wildcats are looking to bounce back for a horrendous 2016 season and played pretty well against the #16 ranked Miami Hurricanes. The Wildcats showed a lot a promise against the FBS Hurricanes but now here comes the real test. Bethune-Cookman is looking to sharpen its resume for the post season and a win on the road against the Lions would be an impressive resume builder. Bethune-Cookman was able to move the ball offensively last week and gained 350 total yards including 121 yards on the ground. Southeastern Louisiana came within an eyelash of getting an FBS win over Louisiana-Lafayette, losing in heartbreaking fashion due to a busted 2 point conversion. The Lions outgained the Cajuns 514 to 363, but loss the turnover battle which cost them the game. This game features two teams with a lot to prove who are trying to put a disastrous 2016 campaign behind them. The footballs will be flying in Hammond, Louisiana on Saturday Night and this game will say a lot about how far these two teams have come from a year ago.

Sam Houston looks downright scary! The Bearkats and All-American QB Jeremiah Briscoe almost put up 700 total yards against Richmond last week and looked unstoppable. Prairie View was originally supposed to open up the season a week ago in The Labor Day Classic against rival Texas Southern, but that game was postponed so this is the season opener for the Panthers. Prairie View enters year #3 under Coach Willie Simmons with a golden opportunity. The Panthers host a top 5 team at home on national television which is a big opportunity for Prairie View. The Prairie View offense under Simmons has been explosive but the defense has been less than stellar. Playing poor defense against the Bearkats is a recipe for disaster, so if the Panthers are to pull the upset the defense must play their best game under Coach Simmons. One thing for certain is that there will be a ton of points put up in Prairie View come Thursday Night, and Prairie View hopes that the majority of those points don’t belong to the Bearkats. A season ago these programs were in two different places. The Demons of NSU went 1-10 and winless in the Southland Conference. Meanwhile at Grambling we witnessed the return of the Tigers who went 12-1, won the SWAC title, won The Celebration Bowl, and was named the HBCU National Champions. Last week the Demons looked much improved against FBS LaTech and was tied at 24 late in the third quarter with the Bulldogs. Grambling fans were disappointed in their efforts last week against Tulane. The high powered offense of Grambling was held in check and the vaunted Tigers defense looked less than stellar. The Demons think that they have more than a realistic chance of upsetting the 23rd ranked Tigers. In order to pull the upset the Demons must avoid the turnover bug which cost them game a week ago. Grambling is playing to show the world that last year wasn’t a fluke and that the SWAC has improved as a conference. In order to beat the Demons the young receivers of Grambling must step up and help Devante Kincaid and the defense must return to their dominate ways of a year ago.

Nobody needs a win as badly as Texas Southern. The Tigers were embarrassed two weeks ago in Tallahassee by Florida A&M and their game against Prairie View was canceled due to Hurricane Harvey. Texas Southern has lost 4 of its last 5 games and hasn’t been completive for more than a quarter in any of those loses. Houston Baptist has lost 3 of its last 5 games but the Huskies looked much improved a week ago against FBS Texas State. The Huskies led Texas State until late in the first half and came within 10 points of pulling the upset. A year ago the Huskies downed Texas Southern 24-20 at home in only their 3rd year of fielding an FCS level team. The Huskies are eager to prove to the world that they’re knocking on the door of being a serious contender in the Southland Conference. Texas Southern is looking to bounce back from a 29-7 woodshed visit at the hands of FAMU. Texas Southern looked far from impressive in their first outing and it will be interesting to see what types of adjustments Coach Mike Maywood and his staff has made. These are two teams who need a win to raise morale in the fan base and the locker room. Something tells me that the Huskies will shock the Tigers for the second year in a row. 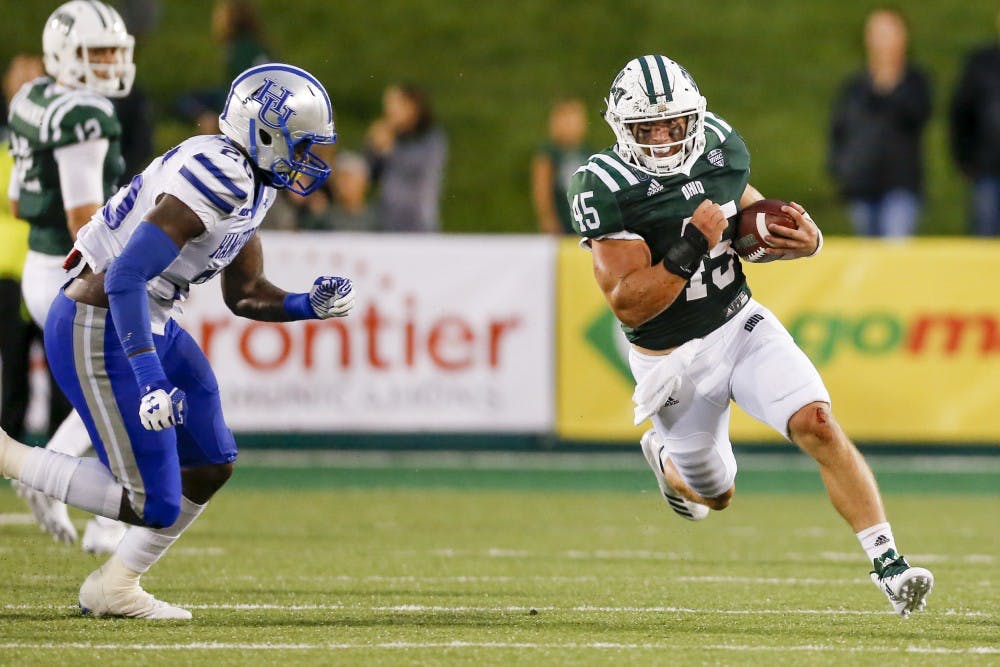 Delaware State fans haven’t had much to cheer in about a decade. Last week the Hornets looked promising for about a half against in-state rival Delaware. The Hornets went into the half trailing the Blue Hens 8-3 but went into the clubhouse with momentum. That momentum was short lived and Delaware closed out the Hornets 22-3. The Hampton Pirates was once the top program in HBCU football a little over a decade ago but times have changed dramatically for the Pirates. Hampton was boat raced 59-0 by Ohio and has now lost 3 of their last 5 games. The Pirates could only muster 108 total yards last week and defensively they gave up 420 yards. The Pirate looked poor in all three phases of the game and now some Pirate fans are wondering if Coach Connell Maynor can bring the Pirates back to the promise land. Delaware State comes into this contest confidently believing that they can upset the Pirates. A year ago Delaware State played the Hornets within 10 points and now they’re traveling to Hampton, Virginia to land their biggest win in a decade. Hampton needs this win to win back some of the Pirate faithful and to get back to competing for MEAC titles. This game is the first conference game of the season for both teams and it is a must win for anyone with plans of playing in Atlanta come mid-December.