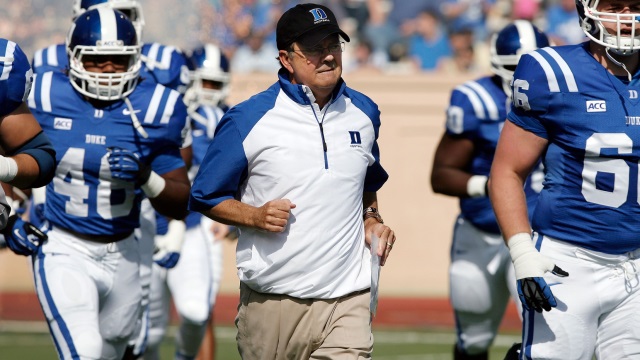 DURHAM, N.C. — The times they are a’changin, is an old Bob Dylan tune which is now being played at Duke University these autumn days.

The Blue Devils football season came to a crescendo on Saturday night at historic Wallace Wade Stadium on the Duke campus as the 5-2 Duke squad prepared for the program’s biggest football game in almost a quarter of a century.

The opponent was arch rival North Carolina, which also brought in a 5-2 record.

Duke has not had a winning season since 1994 and the last time Duke and North Carolina played a football game and both had winning records was also 1994, when UNC was coached by former Applachian State coach Mack Brown.

With Duke’s 33-30 victory over the Tar Heels, the Blue Devils are bowl eligible for the first time since playing Wisconsin in the Hall of Fame Bowl in Tampa on January 2, 1995.

The pass-catch record setting duo of QB Sean Renfree and WR Connor Vernon plus the effective rushing attack of Juwan Thompson, Jela Duncan and Josh Snead, has vaulted the Blue Devils to the No. 1 position in the North Carolina collegiate football poll this week.

Moments after Jamison Crowder’s spectacular touchdown catch with 13 seconds remaining in the game on a fourth down and two from the UNC five-yard line, the Duke players, coaches, administrators and fans felt like the Blue Devils had returned to the football mountain top.

As time wound down on a Tar Heel desperation final play of the game, the Blue Devil fans celebrated as much as when Duke wins a national championship in basketball.

Several Duke players, led by Crowder, sprinted to the Tar Heel sideline to reclaim the Victory Bell, awarded to the game’s annual winner. They rang the bell with joy and then rolled it onto the field and then to the Duke sideline.

The Tar Heels have had ownership of the Victory Bell for the last eight years. About 10,000 students and fans stormed the field in celebration and Duke even had to have security to protect the goal posts.

Duke men’s basketball even benefitted from the huge football victory.

Duke basketball hosted about 10 top-tier national recruits for the scrimmage and treated them to the Duke football game, which they soaked up all the school’s athletic excitement.

Bowl eligible for the first time since 1994

Plays UNC this week. Won last 5 vs the Tar Heels

Lost to WF and Duke. Good win vs Virginia Tech

Most years Mountaineer’s would be No. 1, 2 or 3 on this list