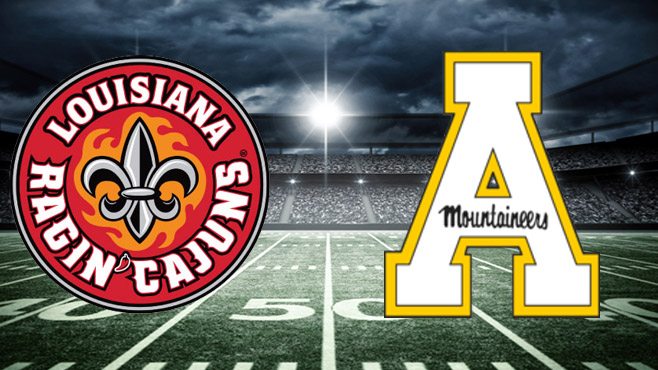 With the Major League Baseball playoff series in full swing and the National Basketball Association still in its preseason, ESPN will now start beginning the odd day games of the week. Luckily this week, however, there is a very good Group of Five contest that will allow the nation’s college football fans to witness as undefeated Appalachian State visits one-loss Louisiana in an early season game that is a rematch of last year’s Sun Belt Championship game.

These two teams actually played each other twice last year The Mountaineers won-17 in an October regular season matchup and again 30-19 in the Sun Belt title game. Both games, however, were played in Boone, N.C. The two teams have played six times in total with the Mountaineers winning all six.

Some may not know but App State is with a new coach Eli Drinkwitz, who arrived in Boone after a successful stint as NC State’s offensive coordinator. He replaced Scott Satterfield, who left after last season to the ACC’s Louisville.

QB Zac Thomas leads the Mountaineer offense that’s averaging 47 points a game in 2019. The Mountaineersalready have a huge non-conference victory at North Carolina to go with wins over FCS East Tennesee State, Charlotte, and Coastal Carolina.

While the Mountaineer offense has put up similar numbers as last year, the defense has statistically been down. App State last year held teams to 3.5 yards per rush last fall but that statistic has jumped to 4.3 in 2019. That trend carries to the entire unit, as Appalachian State’s yards per play was 4.4 yards per play and is up to 5.9 this year.

Key Player: RB Darrynton Evans is quietly been one of the better running backs in all of the FBS this year with 471 yards and 9 touchdowns in 4 games. While QB Zac Thomas will also be key in this game, the Mountaineer running game will really need to balance out the Mountaineer offense. This is especially true against a stout Louisiana defense that has held teams under 200 yards per game in both rushing and passing.

The Ragin’ Cajuns started its season with a close loss against Mississippi State in a neutral site contest in New Orleans (38-28). Louisiana, however, has reeled off four consecutive victories since hat loss with home victories over Liberty and FCS Texas Southern and road wins versus preseaon MAC pick Ohio and conference mate Georgia Southern.

The Ragin’ Cajuns enter Wednesday night’s game ranked as the top rushing team in all of FBS by averaging 314 yards on the ground per contest. Coach Billy Napier’s group posted 163 on the ground against Mississippi State in the opener and has also had two 400+ yard rushing games (Liberty and Texas Southern).

Louisiana’s defense has showed marked improvement over the past two seasons. The Cajuns gave up 40 points a game in 2017 and cut that total to 34.2 a contest last year. This year, this team leads the Sun Belt in fewest points allowed (21.4).

Key Players: QB Levi Lewis has averaged around 24 pass attempts per contest with the running game from RBs Trey Ragas and Elijah Mitchell, who are both over 400 yards rushing this season. The junior signal caller saw limited action in both 2017 and 2018 before winning the starting job this offseason. Lewis played well with the running game leading the charge. Expect the Appalachian State defense to play the run and force Lewis to pass the ball so how well Lewis can get the passing game going will be key for the Cajuns.

Fearless Forecast: Turnovers will play a key role in this game as both teams seem to be fairly even. The Appalachian State offense is more dynamic right now but the Louisiana defense has been more stout. Expect the Cajuns to force a couple more turnovers and with the home field this time, things will be different than the last two games from last year in a fairly high scoring game and back-and-forth scoring game. Louisiana 35 App State 31