Wow, what a game in Dallas!! SMU came back from a three touchdown deficite to win in three overtimes over Tulsa. The Mustangs remain undefeated with the come-from-behind victory. Memphis also in the AAC West remained undefeated with its win at the Sun Belt’s Louisiana-Monroe. UCF lost to Cincinnati to likely be out of the race for the top Group of Five team in AAC East action.

I will go over each Group of Five conference action below and add my Top 5 games of the week as well.

QB Shane Buechele threw a 25-yard touchdown to WR James Proche in the third overtime and SMU beat Tulsa 43-37, coming back from a three-touchdown deficit in the fourth quarter to win in its first game as a ranked team in 33 years. After Tulsa missed its second field goal in overtime, Proche made a leaping catch in the front corner of the end zone over a defender and got a foot down before going out of bounds. The play was initially ruled incomplete before being overturned on replay review.

On Friday, CB Ahmad Gardner returned an interception for a go-ahead touchdown and Cincinnati clamped down on freshman QB Dillon Gabriel and UCF’s high-scoring offense for a 27-24 victory that ended the Knights’ streak of 19 conference wins. In addition to Gardner’s 16-yard interception return, the Bearcats picked off Gabriel’s passes at the Cincinnati 2 and 6 as they took control and closed it out.

Navy QB Malcom Perry had a 4-yard touchdown run with 23 seconds remaining to give the Midshipmen a stunning 34-25 victory over Air Force. Navy LB Tony Brown returned a fumble 8 yards in the closing seconds to round out the scoring by the nine point margin. Air Force stormed back from a double-digit deficit to take the lead prior to Perry’s touchdown to take the lead back.

WR Amare Jones caught six passes for 104 yards and a touchdown and ran for another score, and Tulane beat Army 42-33 on Saturday to snap the Black Knights’ 15-game home winning streak. Tulane, which hasn’t started this well since going 4-1 in 1998, outgained Army 525-363 and outrushed the Black Knights 324-193, the fourth time this season the Green Wave have gone for 250 yards on the ground.

In a game that saw the lights go out in Greenville, NC, RB Re’Mahn Davis took the lights out to East Carolina as he rushed for a career-high 157 yards with a touchdown and Temple defeated the Pirates 27-17.

RB Jordan Cronkrite racked up 148 of USF’s season-high 313 rushing yards as the Bulls took a 48-22 conference victory at UConn–their first win over a FBS team this year.

Houston was off this week.

Western Kentucky’s defense held Old Dominion to only 55 yards on the ground, while the Monarach’s only threw for 105 yards. in the Hilltoppers 20-3 win in Norfolk. WKU RB Gaej Walker ran for 114 yards on 25 carries with a touchdown marking his third game with more than 100 rushing yards this season. It was the third straight win–all in CUSA play for the Hilltoppers to take an early lead in the C-USA East Division.

UAB bounced back this week after losing its first game this year a week ago. QB Tyler Johnston III passed for 282 yards and 3 touchdowns and RB Lucious Stanley ran for two scores to head the 35-20 win at home over rice. The game was delayed twice due to lighting for a total of 2 1/2 hours.

Marshall racked up nearly 600 total yards, but it was Middle Tennessee who got the win in the two team’s CUSA opener. Marshall turned the ball over four times including Jovante Moffatt, who had two interceptions. His first-quarter pick set up the home team’s first score and he also made 14 tackles, one coming on a fake field goal try late in the fourth period and the Blue Raiders won 24-13.

QB Lowell Narcisse ran for 115 yards and accounted for two touchdowns to lead UTSA to a 26-16 victory at UTEP. Freshman RB Sincere McCormick ran for 189 yards and broke loose for a 51-yard touchdown run with four minutes to play to seal the victory.

FIU won its out-of-conference contest of independent UMass easily 44-0. QB James Morgan passed for 263 yards and two touchdowns, while RB Anthony Jones rushed for 115 yards and a score to head the Panther win.

The five other C-USA teams including FAU, Charlotte, Louisiana Tech, North Texas, and Southern Miss were all off this week.

The game of the week in the MAC was a West Division clash with Toledo hosting Western Michigan. The Rockets senior QB Mitchell Guadagni threw for two touchdowns and ran for two more to lead Toledo to a 31-24 victory. Clinging to the touchdown lead, the Rockets stopped the Broncos on fourth-and-22 from the Toledo 24-yard line when WMU QB Jon Wassink was tackled two yards shy of the first down by LB Saeed Holt with 1:44 left. Toledo was able to get a pair of first downs to run out the clock to secure the win.

RB Jonathan Ward rolled up 205 combined yards in rushing and receiving and scored three touchdowns as Central Michigan posted a resounding 42-16 victory over Eastern Michigan. The Chippewas used the big play in rolling up season-highs in rushing yards (308) and total yards (587).

Ball State forced three second-half turnovers and Caleb Huntley got loose after the break, as the Cardinals overcame an unremarkable first half to claim the Bronze Stalk trophy with its 27-20 win over Northern Illinois. It was the for the first time winning the trophy since 2008. The Cardinals outscored Northern Illinois 24-3 in the second half, including 21 unanswered points, despite not completing a single pass after the break. They only attempted three of them in weather conditions that made it difficult for either team to move the ball through the air.

Ohio stopped its three game losing streak in its MAC conference opener as Bobcat redshirt freshman RB O’Shaan Allison scored a game-tying five-yard touchdown, then redshirt senior placekicker Louie Zervos converted the extra point to lift Ohio to a 21-20 victory over Buffalo in overtime. Buffalo redshirt sophomore QB Kyle Vantrease kept it himself and scored from three yards out to give the Bulls a six-point lead in the opening frame of overtime but the extra point attempt by freshman placekicker Jackson Baltar failed, however, giving the Bobcats a chance at victory on their overtime possession.

Akron and Miami had bye weeks.

Boise State QB Hank Bachmeier threw for 299 yards and two touchdowns and Boise State rode a strong defensive effort to a 38-13 win over UNLV. Defensively, just a junior Curtis Weaver, now is the Mountain West Conference all-time sack leader. He had three sacks to take the lead, and has 29.5 in his career. The Broncos had five sacks overall.

QB Josh Love passed for 405 yards and two touchdowns and San Jose State beat New Mexico 32-21 in San Jose. It was really not a contest as the Spartans scored the first 26 points of the game in the first half and held on as the Lobos tried to make the comeback.

Utah State was blown out at the SEC’s LSU 40-6. Utah State scored two field goals in the first quarter but could not muster much else the rest of the game. The Aggies only totaled 159 yards of offense and QB Jordan Love was intercepted three times.

As mentioned earlier in the AAC recap, Air Force fell at Navy 34-25.

Wyoming, Hawai’i, Fresno State, and Nevada were all on byes this week.

Georgia State started strong and finished strong, using a record-setting performance to earn a 52-38 win over Arkansas State on Saturday afternoon at Georgia State Stadium. Georgia State scored the first 21 points of the game, but it wasn’t until a 2-yard RB Destin Coates touchdown with 2:05 to play that the game was sealed. QB Dan Ellington finished with a career-high 382 yards passing on 29-of-41 attempts. He added 69 yards on 19 rushing attempts for the Panthers, who scored the most points in program history against an FBS opponent.

Georgia Southern’s Tyler Bass kicked a 37-yard field goal in the second overtime after the Georgia Southern forced a turnover and the Eagles rallied to defeat South Alabama 20-17. Bass had missed a 32-yarder on the first possession of overtime. However, Ty Phillips blocked a 45-yard attempt by South Alabama’s Frankie Onate to force a second overtime.

As mentioned in the AAC recap, ULM lost at home 52-33 to Memphis.

The only undefeated team left in the SBC in Appalachian State, along with Coastal Carolina, Louisiana, and Texas State all had byes this week. 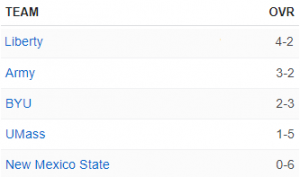 Liberty RB Joshua Mack ran for a 4-yard touchdown with six minutes left and the Flames held off New Mexico State for a 20-13 road victory at Las Cruces. New Mexico State RB Jason Huntley’s 12-yard touchdown run tied the game with 7:46 remaining. On the ensuing series, QB Stephen Calvert threw a 54-yard pass to Mack, who scored on the next play. New Mexico State drove as far as the Liberty 8 yard line, but Flame DL Jessie Lemonier forced a fumble from Aggie QB Josh Adkins with 3:15 remaining and teammate LB Solomon Ajayi recovered the ball. The Flames ran out the clock to secure the win.

As menioned earlier, UMass and Army fell to other G5 teams. UMass was blown out on the road by FIU, while Army lost at home to Tulane.

BYU had a bye this week.