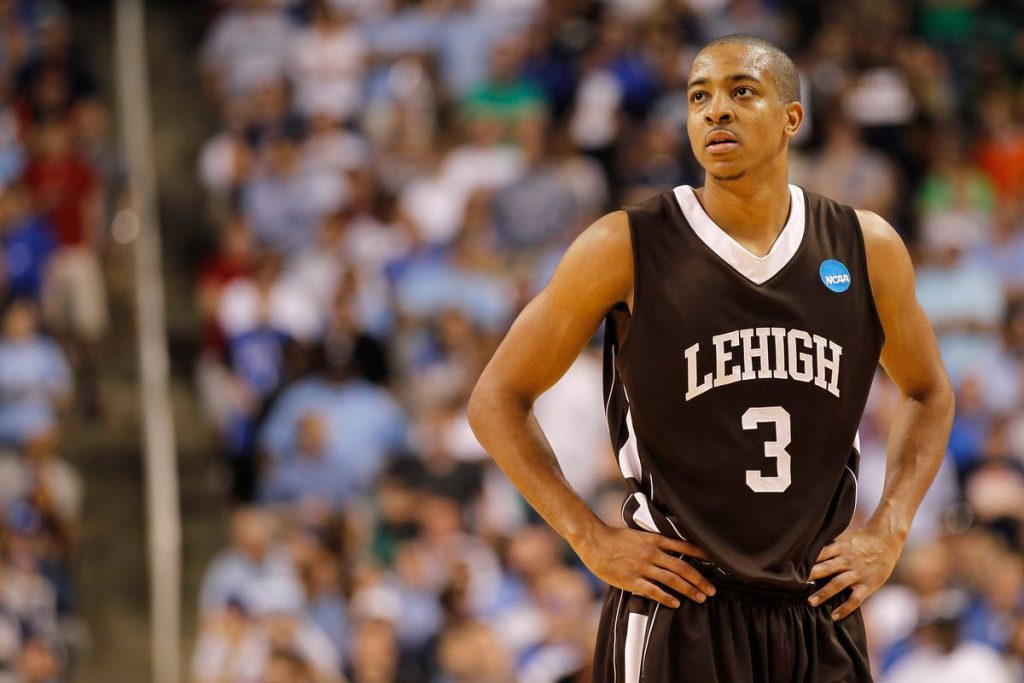 It’s safe to say everything changed for Lehigh men’s basketball after the evening of March 16th, 2012.

Sure, before that date there were keen followers of the Lehigh men’s basketball program that had seen the team grow under onetime assistant Dr. Brett Reed into a squad that routinely finished in the upper half of the Patriot League standings.

But even those that followed the incredible Lehigh career of G C.J. McCollum through his days as a (generously) listed 6’3, 165 lb freshman might have paused to think that the hard-working basketball dynamo from Canton, Ohio might deliver the Mountain Hawks one of the most memorable upsets in NCAA Tournament history.

This Sunday, C.J. returns to Stabler Arena to see his Number 3 raised to the rafters during halftime of Lehigh’s contest against Holy Cross. C.J. is the first – and only – Mountain Hawk basketball player that has gone on to play in the NBA, and, in the process, has become an outstanding ambassador for Lehigh as a school.

My favorite story about C.J. McCollum comes from the 2012 Patriot League Tournament, when the Mountain Hawks, the No. 2 seed, were playing American.

Coming off a so-so performance in the quarterfinal round against Colgate, McCollum played electrically that Saturday afternoon, scoring 18 of his 27 points in the second half to pass the 2,000 point barrier on his career.

Up 34-28 at half, C.J.’s performance really put the dagger in American’s hopes to make the championship game versus Bucknell, with a stellar run of buckets that dazzled the fans.

But it was his smooth look towards the loud American Eagle fans, pretending to wipe his nose while pointing up at the scoreboard, what really impressed me. As great as he was shooting, he wasn’t above subtly looking over at the blue and red cheering section and pointing out the current score.

“I’m always motivated,” he said after that game, already sounding like a five-year NBA veteran rather than a confident junior at Lehigh. “I was just trying to motivate my team to win tonight. You’ve got to have short-term memory as a basketball player.”

In that post-game presser, he went down the stat sheet and went through the contributions of his teammates that also came up huge. G Mackey McKnight. F Gabe Knutson. C.J. had a complete handle on this team as a leader.

Even as a freshman he caught the attention as someone to watch for Lehigh. He led all collegiate freshmen in scoring that season as the Mountain Hawks made their way through the Patriot League championship, qualifying for the NCAA Tournament.

Though C Zahir Carrington was the big star on that 16th-seeded team that gave Kansas a first-half scare in 2010, McCollum really made an impression nationally to those who live and breathe college basketball. He led Lehigh in scoring that day with 26 points, and put himself on the radar of followers of NCAA Basketball.

When Lehigh would return to the tournament two years later behinf McCollum’s Patriot League Player of the Year performance, Duke head coach Mike Kryzyzewski knew what he was dealing with back in 2012 after Lehigh toppled Bucknell 82-77 in the championship game.

“I think the mindset of the Lehigh team is not hoping that they stay with us, but they said they can beat us,” fatefully told Chris ‘Mad Dog’ Russo in the run-up to the tournament game. “They are a very confident team with a player who gives them even more confidence in McCollum. I don’t think their mindset is lets hang with them for 4, 8, 12 or 20 minutes; they are not afraid of us so we will play a very confident, high-scoring team Friday night. It will be a tough game for us, we know that. We have a lot of respect for Lehigh.” 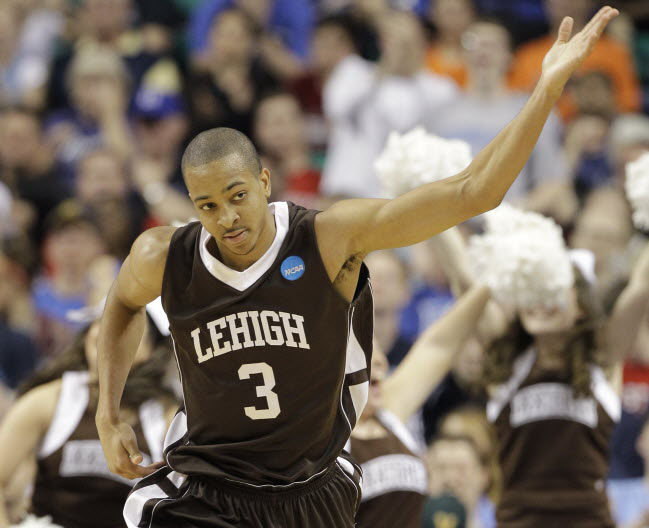 It’s a nervewracking final 3 minutes that took 20 actual minutes to complete, and the more you watch it, the more it seems like Duke is maybe one shot, one steal, or one defensive play away from escaping the upset bid from the Mountain Hawks.

Duke, with five future NBA players on their roster, showed a lot of grit in those final three minutes, making a huge 3 pointer, drawing some questionable fouls, and making it a one score game several times.

But C.J. McCollum and the rest of the Mountain Hawks simply refused to wilt, as so many 15 and 16 seeds had done over the course of so many NCAA Tournaments.

There are so many highlights and goosebump moments for Lehigh fans in those final three minutes involving a bunch of different Mountain Hawk players, but so many of those moments were orchestrated in one way or another by C.J.

There’s his perfect 3 pointer that created a rickety 2 point lead into a breathable 5 point lead with about 2:30 to play.

There was his cross court pass to an uncovered Gabe Knutson, ending with a thunderous dunk that set Greensboro Coliseum on fire.

There was the tipped almost-steal by Duke, which McCollum deftly brought down, dribbled the length of the court, and faked a shot that became a pass to F Jordan Hamilton for a dunk.

“Do you believe in miracles?” Jim Nantz exclaimed to a nationwide network audience as Lehigh consummated the 75-70 upset, only the fifth-ever 15 seed upsetting a 2 seed up until that point in NCAA history.

Journalism And The NBA

For all the Cinderella of C.J.’s junior season, McCollum’s senior year was anything but.

In December, a foot injury caused him sent his senior season to an abrupt end. Rather than try to rush him back, head coach Brett Reed selflessly put C.J.’s future career first, putting his rehab from surgery over bringing him back for one last hurrah.

This was significant, because C.J., after his junior season was already talking with NBA people about possibly entering the draft. As is C.J.’s way, he talked to people, studied how it’s done, got a sense of what was possible, and decided to come back for his senior year.

“Given the opportunity to enter the NBA Draft after his junior season, McCollum instead returned to Lehigh with the goal of getting his degree and furthering his education,” a Lehigh news aritcle said.

“By returning for my senior year, I give myself a chance to complete my degree at a prestigious university, while putting myself in a position to be successful no matter what happens in my future,” he wrote in The Sporting News.

The foot injury was a potentially heartbreaking ending to a storybook college career, one where C.J. had not only conquered Duke – Duke! – and the Patriot League, but also had been a true standout in his major at Lehigh.

Away from the court, C.J. was making a big name for himself in Lehigh’s journalism department as well as the athletic department.

C.J. was an editor at The Brown and White and worked inside the Lehigh media department, writing game stories and occasionally stepping behind the camera as well. Once, after a student-athlete stood him up for an interview, he tracked them down in the school cafeteria.

But most of C.J.’s senior year at Stabler Arena was spent on crutches with a boot on his broken foot, with no guarantees that there was going to be an NBA opportunity at the end of it.

Fortunately, C.J. worked as hard as ever in rehab, learning more and more about the things he needed to do to secure a spot in the draft.

“The first thing I did when I got my foot injury was start calculating,” C.J. revealed in a radio interview this week. “How many weeks until the conference tournament, how many weeks until the NCAA Tournament. I was trying to figure out a way to come back, but the timeline of healing from my injury didn’t line up with it. There was no way for me to come back and have a positive impact on the team. You kind of have to weigh the pros and cons.”

Because of the professionalism of C.J. and Dr. Reed, McCollum ended up drafted by the Portland Trail Blazers with the 10th pick in the 2013 NBA Draft.

Fittingly, he wrote a “Point After” piece for Sports Illustrated in the run-up to the NBA draft, shining a light in his story through the pre-draft process. It is a unique take on the pre-draft process given by someone who couldn’t compete on the court most of his senior year.

McCollum’s work ethic has translated into a successful career with the Portland Trail Blazers, where he and G Damian Lillard have become the stars and leaders of the team.

His hard work has let to great personal success on the court – just this year, he had his first-ever triple-double, and he has a career 3-point percentage of 39.9% – but he’s also been tireless in what he’s given in terms of journalism and education as well.

As a Blazer, he’s averaged more than 20 points per game the last three years, and has been the perfect complement to Lillard, able to take over point guard duties with ease when Dame heads to the bench for rest.

But on the education and sports media front, C.J. is equally as prolific.

Aside from a successful podcast and series of articles at The Players Tribune, he’s also set up “C.J.’s Press Pass” program, positively impacting a new generation of youth that want to get into the new business of journalism.

“The idea is pretty simple,” he said. “I want to empower high school students to get hands-on journalism experience so that they will be better prepared to pursue a career in media if they think it’s for them. We started in January with 30 students from Portland’s Madison High. I came to their classroom and explained why I have a passion for journalism and gave them their first assignment. They had to actually cover our game against the Minnesota Timberwolves.”

He also routinely buys series of tickets for the Portland Boys and Girls’ club – and also takes time out for Lehigh folks who come to his games on the East Coast as well.

It’s his excellent, hard-working example that makes him such a great ambassador for Lehigh.

“From my perspective, he is the most visible example we have of someone who demonstrated through their behavior and their deep and sincere commitment that you can be all that you want to be,” Lehigh athletic director Joe Sterrett said this week. “He committed himself academically in the same way he did in basketball, where he was always the first one in the gym, always the last one to leave, always looking for an opportunity to get up more shots.”

This Sunday, it’s shaping up to be a great homecoming for an alum that has made many Lehigh alumni very proud.