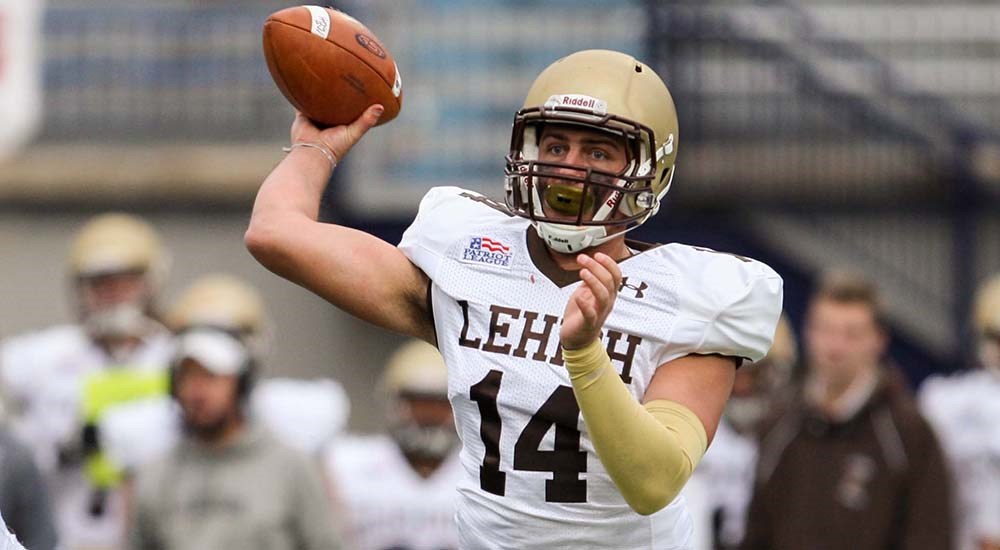 The 2017 Lehigh football season was one of the stranger ones in Mountain Hawk history.

Starting in the FCS Top 25, losing five consecutive games to start 0-5, consummating an improbable win at Colgate, and then winning just enough through the league – including beating Lafayette in the 153rd meeting of “The Rivalry” – to defend their Patriot League Championship and another trip to the FCS Playoffs.

It’s as if the team flunked every homework and flunked the mid-term, but hunkered down and rallied to pull up their grades, acing the final and ending up with a solid B for the season.

Coming off a strange season like this is a strange spot for the Mountain Hawks – a sub-.500 record, yet also defending league champions in a season that frequently didn’t feel like a championship year.

Normally, championship teams need to fight off complacency. But head coach Andy Coen and starting quarterback Brad Mayes had a different message for their fans, said in different ways – that the 0-5 start they had last season will not be repeated.

Coach Coen’s big message for his team going into the season is that the team needs to play well and play together from the get-go, not pull things together past mid-season.

“We can’t start another season 0-5,” Coen said on the Patriot League football media call last week. “We want to make sure we can come right out, make some plays, and win some games early in the season. I’m expecting out football team to come out right from the beginning and start to play good football.”

The Mountain Hawks certainly have lots of potential to come out firing with Mayes and running back Dominick Bragalone, who were both named on the preseason all-Patriot League team and later were listed on the STATS preseason Walter Payton Award watchlist, an award given at the end of the season for the best offensive player in FCS.

The focus of Andy and QB Brad Mayes, who was also on the call, was on being mentally ready, something they didn’t think they were all the time last season.

“We started out pretty slow last year, so we’ll try to avoid that, do our best,” the senior quarterback from Florida said. “I think the biggest difference between last year and this year is that there is no more complacency. We know we have a lot to prove and a lot of doubters. We just have the next man up mentality and we’re excited to strap it up and prove people wrong.”

“Prove people wrong” seemed to be Brad’s main message from the media session, something he saw first hand from last season’s awful start. As Lehigh went from a preseason Top 25 ranking to falling completely off the national radar, Brad saw firsthand how a season can go from national buzz to people thinking nationally that you’re nothing.

The fifth loss in a row, the loss in Staten Island last year to Wagner, seemed to be the bottoming-out point.

“I was getting good numbers, but I wasn’t taking [the responsibility] and I wasn’t stepping up as a leader,” he said. “I think the Wagner game, my worst performance in my 18 year career of playing football, I think that really snapped me to the real world. [I realized] you have to work for what you want, and that kind of put a chip on my shoulder. It was a learning experience to not take anything for granted.”

Mayes’ numbers for the 2017 season – 3,886 yards passing in 12 games, 31 TDs and a 64.18% completion percentage, were certainly impressive, as was Bragalone’s 1,388 yards rushing and 22 all-purpose touchdowns. But more frequently than not, they were in losing efforts.

“We have a different mentality this offseason,” Mayes continued. “We have a lot of guys back, but we can’t let what happened last year happen again. I don’t think any of us want to win a championship in that way again.”

One big thing that coach Coen wants to do differently this year is to bring more energy to a defense that needed a change, judging by the fact that the unit statistically was at the bottom of a multitude of different statistical categories.

He was pleased with how the defense did in the spring, however, and how much energy they are bringing into the upcoming season. The Mountain Hawks defense graduated only three seniors off the starting group, and coach Coen is excited at some of the incoming freshman that are coming in and hopefully will have an immediate impact.

“We have to make sure we continue to bring a lot of energy and create turnovers and those type of things which we haven’t done,” Andy said. “Toward the end of the season last year, we were growing with some younger players. Those guys now are going to have to play for us. We recruited well on the defensive side of the ball the last few years and now as sophomores and juniors those guys will be a big part of making our defense a lot better.”

Even though last year was a championship season with an FCS Playoff appearance and a win over their big Rivals, there’s still that lingering feeling with both player and coach that there is everything to prove going into this season. In a way, it’s all about regaining national respect.