It is rare that a FCS team beats an FBS team. It is even rarer for two FCS teams that defeated an FBS team in the previous week to meet the following week.

But that is the case when Eastern Illinois and Illinois State meet this Saturday afternoon in Normal.

This game pits the oldest rivalry in the state. The two teams will mee 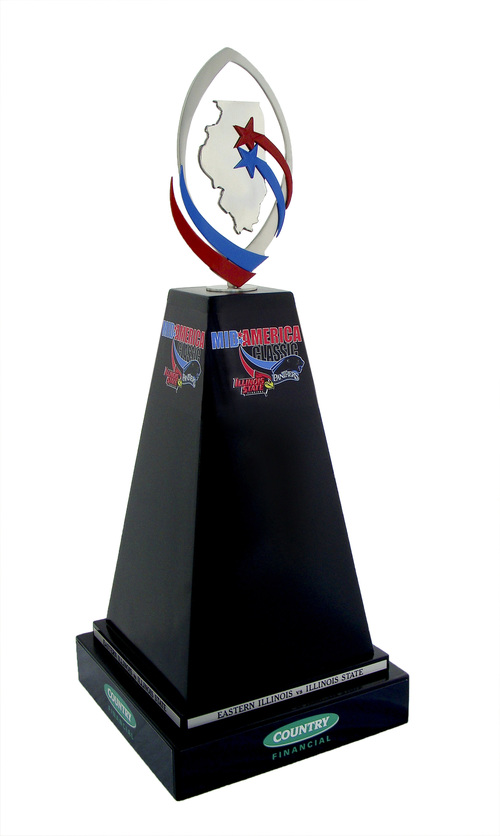 t for the 105th time this Saturday in Normal, Illinois.

Both are coming off of impressive wins over FBS opponents.

Illinois State defeated the Big Ten’s Northwestern 9-7 on Saturday afternoon, and as that was happening in front of a national television audience, Eastern Illinois was putting the final touches on their defeat of the MAC’s Miami of Ohio 21-17.

EIU and ISU have met for the most part uninterrupted through the years as the Panthers and Redbirds played in the Illinois Intercollegiate Athletic Conference until it disbanded in 1970.

Both teams remained in this league until the Panthers moved their entire athletic program to the Ohio Valley Conference in 1995.

Even though annual meetings are no longer certain, the two sides have met almost every year since, including twice in 2006 (last being in the FCS playoffs).

The two teams have played 104 times in total, with Illinois State holding a 54–41–9 advantage in the all-time series.

How did the two teams defeat their FBS opponents last week?

Place kicker Sean Slattery connected on a 33-yard field goal as time expired to give Illinois State a 9-7 upset over Northwestern. The field goal was anything but routine, however. His game winning kick hit the inside of the left upright and caromed through the goalpost.

Slattery had missed a field goal and an extra point earlier.

Illinois State quarterback Jake Kolbe was 7-for-7 on the game’s final drive, picking apart NU’s defense and leading the Redbirds down the field late for the game-winning score in the program’s first ever victory over a Big Ten team.

Overall, Kolbe completed 30 of his 41 passes for 287 yards and two interceptions, Anthony Warrum had nine receptions for 116 yards and George Moreira had 57 yards on 12 carries and a touchdown for the Redbirds.

Both teams struggled offensively for much of the day, as the first points for either team came on a six-yard touchdown run by Redbird running back George Moreira with 32 seconds left in the first half. After a missed extra point, the Redbirds went into halftime leading 6-0.

With Northwestern still down 6-0 in the fourth quarter, Wildcat quarterback Clayton Thorson delivered a 10-yard touchdown pass to wide receiver Austin Carr on a fourth-down play to give NU the lead following the extra point, 7-6.

But with 3:11 remaining in the game, Illinois State took the next possession at their own 13-yard line and marched down the field, setting up Slattery’s game-winning attempt that banked in with time expired in the game.

In the other game, a two hour and 45 minute lightning delay before Eastern Illinois’ game against Miami proved the wait was worth it.

Miami held a 17-7 lead going into the fourth quarter, but the Redhawks missed their field goal to begin the period proving to be a turning point for the Panthers.

EIU recovered and scored two touchdowns with less than 4 minutes left gave the Panthers the upset over the FBS school for the 21-17 win.

It was the Panthers first win over an FBS opponent since knocking off San Diego State 40-19 in 2013. Other than this win at the Mountain West school, the other five FBS wins in EIU’s history have come against MAC schools.

The Panthers converted twice on third-and-goal to get the key touchdowns.

The first touchdown came when EIU went 80 yards in 16 plays. The Panthers were aided by a late hit early in the drive and a pass interference call on third-and-8 at the Miami 12-yard line. On third-and-goal at the 3, quarterback Mitch Kimble hit wide out Dennis Turner, who was just across the goal line for the touchdown to make it 17-14 Miami.

Then when the Panthers got the ball back with 2:35 left in the game, EIU drove to the Miami 18-yard line. Kimble was

hit in the head after a throw, which was called roughing the passer, putting EIU at the Miami 9-yard line. On third-and-goal again, Devin Church caught the screen pass and got a couple of blocks to go in for the 7-yard go-ahead score.

The FBS win came after EIU had lost to another Missouri Valley team in Western Illinois 38-21.

How do I see this Mid-America Trophy game coming out?

The two teams met in Charleston last year with Illinois State scoring a 34-31 overtime victory. As can be seen with the Illinois State win over Northwestern, the Redbirds have a stout defense.

Illinois State won its season opener over Valparaiso 50-13 so their average is giving up just 10 points per game (although in the Valpo game, it was the Redbird offense that gave up the touchdown on a return of an interception).

Illinois State has been plagued with giving up turnovers in their first two games despite winning these two. The Redbirds have given up three turnovers all on interceptions but have also gained three turnovers back. ISU has also fumbled the ball three times but all three were regained by its offense.

Eastern Illinois has also had plagued with turnovers with two interceptions and three lost fumbles.

I think the winner of this game will be the team that wins the turnover margin.

Given EIU’s earlier game against another MVFC team in Western Illinois, I think Illinois State looks like the stronger team and playing at home will be a big aid. I think the Redbirds will hoist the Mid-America Trophy again.

But in rivalry games, many times the statistics can be thrown out the window.

Come Saturday, we shall see how this one turns out.

May the best Illinois team win.

Kent’s CSJ Games of the Week

I went into the details of this game above. I think the Redbirds will win this by ten in a relatively low scoring game.

This game likely would have had more luster had both teams not be coming off of losses. Northern Iowa lost at home to Montana 20-14 and Eastern Washington lost 50-44 in overtime at North Dakota State.

But despite the losses last week, these two teams look primed to be players in their respective conference title races—Northern Iowa in the Missouri Valley and Eastern Washington in the Big Sky.

The Panthers and the Eagles had a great show down in the UNI-Dome in 2015, with UNI coming away with a 38-35 victory. Quarterback Aaron Bailey and running back Darrian Miller both rushed for over 100 yards. Current NFL Chicago Bear, Deiondre’ Hall, coming up with a huge interception return for a touchdown in the fourth quarter to help seal the win.

The game also saw all-time leading EWU receiver Cooper Kupp go down with an injury in the second quarter.

Kupp had nine catches for 179 yards and touchdown catches of 18 and 73 yards, however, he suffered a hip pointer and couldn’t play in the second half. Sophomore Nic Sblendorio had career highs with 10 catches for 158 yards and junior Kendrick Bourne added eight grabs for 84 yards and two touchdowns.

Northern Iowa countered with a running game that racked up 266 of the team’s 460 yards, with Bailey rushing for 134 and passing for another 91.

Bailey has passed for 329 yards and two touchdowns, and rushed for 122 yards and another TD thus far in 2016.

This game will be the seventh all-time meeting between these two FCS juggernauts but ironically, the first time the two will met in Cheney. UNI has won all six prior meetings at home.

The biggest question mark coming into this game will the the health of Kupp.

I think a lot of points will be scored but I like the Eagles to pull out this game by a field goal in the end.

This will be a game that I will attend this weekend. I believe Iowa will be the toughest FBS opponent that NDSU has played in its Division I history. The Hawkeyes are coming off a Rose Bowl invite and a Big Ten West Division championship, while most FCS enthusiasts know that NDSU is coming off its fifth straight FCS national title.

The ties between these two schools are numerous. Iowa’s current athletic director is Gary Barta, who was a Bison back-up quarterback of the Bison football team that won the 1983, 1985, and 1986 Division II National Championships.

Taylor also was the one that hired current head coach for the Bison in Chris Klieman after the first coach he hired in Craig Bohl left to coach at FBS Wyoming.

Klieman also has ties to the state of Iowa. He is a native of Waterloo and played and coached at Northern Iowa before coming to NDSU as an assistant five years ago.

On the field, these two teams look almost like mirror images of each other. The two teams want to establish the run first on offense and want to control the line of scrimmage on both sides of the ball with strong line play.

Iowa quarterback C.J. Beathard has a solid running game on which to rely. I think the Bison defense will look to stop the run first and force his passing. This maybe a pick your poison defensive stop as Beathard has completed 66.7 percent of his passes with four touchdowns through two games so far.

NDSU quarterback Easton Stick likely will be throwing away from Iowa top corner back Desmond King but the Bison will also try to run the ball with King Frazier, Lance Dunn, and Bruce Anderson.

One stable of the five national titles has the Bison defense. Thus far, the NDSU defense has not performed up to the same level as seen in past years – giving up over 30 points per game thus far.

I think NDSU will stay close into the beginning of the second half but Iowa’s depth will tire the Bison in the end.