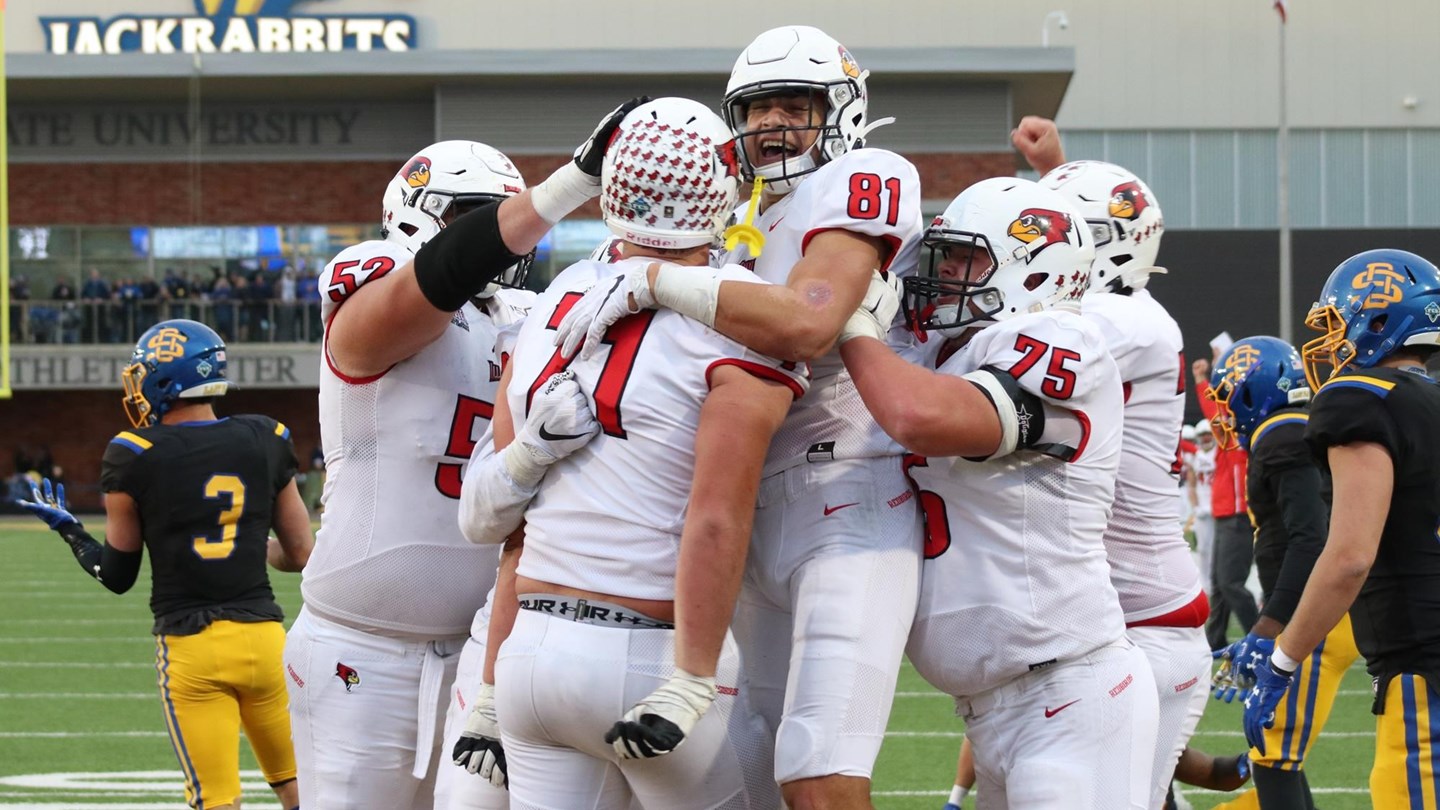 The beat goes on for North Dakota State as it won its 31st straight contest in blowing out Western Illinois 57-21. The Bison rolled up 688 yards of total offense–the most in its Division I era and the fourth most in school single-game history. Six different players scored touchdowns including two from true freshman Jalen Bussey, who made his first career appearance and stole the show in the fourth quarter. Bussey’s first rush went for a 65-yard touchdown. Two series later, he returned the kickoff 50 yards and then scored on a 45-yard run on the next play. He finished with six carries for 123 yards and two touchdowns with 173 all-purpose yards in his collegiate debut. QB Trey Lance went 17-for-22 passing with two touchdowns and 313 yards – tied for eighth most in school single-game history. Lance sat the final 20 minutes of the game.

But while the Bison keep rolling, the biggest upset possibly thus far in the MVFC took place in Brookings. SDSU, who was ranked #4 in last week’s playoff committee rankings, had four costly turnovers to help lead Illinois State score 17 unanswered points in the second half to defeat the Jackrabbits 27-18. The Redbirds scored three times – a pair of field goals and a touchdown – in the fourth quarter. The longest scoring drive by the Redbirds in the final stanza covered only 18 yards as they capitalized on an interception and two fumbles by the Jackrabbits. The fourth-quarter mistakes continued to mount for the Jackrabbits as their fate was sealed with just over four minutes to play, when backup kicker Cole Frahm, who had put the Jackrabbits on the board late in the first quarter with a 43-yard field goal, missed a 35-yarder. RB James Robinson finished with a game-high 98 yards on 24 rushing attempts and a touchdown.

Northern Iowa continued its winning ways and plunged into second place in the MVFC standings and have a strong case for a seed as its three losses were to FBS Iowa State and current Top 10 Playoff committee ranked NDSU and the Big Sky’s Weber State (all on the road). The Panthers held Indiana State out of the end zone while forcing three turnovers and picking up touchdowns from Suni Lane and Trevor Allen to earn a 17-9 home win over the Sycamores. Allen rushed 12 times for 62 yards and a touchdown. Lane recorded three catches for 55 yards and score. QB Will McElvain went 11-20 for 167 and the one touchdown.

Southern Illinois stayed in the playoff chase with its fourth straight win–the longest SIU winning streak in 10 years. The Salulis dismantled Missouri State 37-14 and the game was really over by halftime as SIU rolled up 395 total yards en route to a 30-0 lead at the break. WRLandon Lenoir had a career game with nine catches for 124 yards and two touchdowns. WRAvante Cox added five catches and a pair of scores as well to lead the Salukis to the victory.

Youngstown State’s playoff hopes were likely dashed in its visit to South Dakota this week. The Coyotes opened with four long touchdown drives and was never threatened in throttling Youngstown State 56-21. RBs Kai Henry and Canaan Brooks led a Coyote ground effort that surpassed 300 yards for the second game in a row and for the third time this season. Henry, who carried 13 times for a game-high 130 yards, became the first USD back since Amos Allen in 2007 to surpass the century mark three games in a row. Brooks added a career-best 112 yards on 11 carries. The two combined for three touchdowns.

Below are the full game recaps within the score and video highlights of each game.