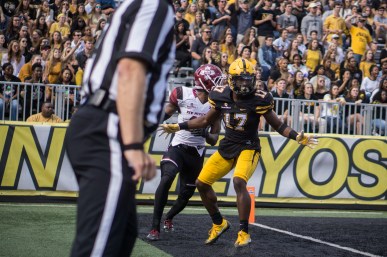 Appalachian State knew it was facing a new and improved New Mexico State football team Saturday afternoon, the Mountaineers just didn’t know how much better and how hard it would be to put these hard-charging Aggies away.

The Sun Belt Conference favorites from Boone needed a school-record six interceptions — three each from cornerbacks Tae Hayes and Clifton Duck — and three big plays from the offense to come from behind twice in the fourth quarter and outlast NMSU 45-31 before 22,787 fans on a wild homecoming day at Kidd Brewer Stadium.

After blowing a 17-7 second-quarter lead and being largely ineffective with their attack for three periods, the Mountaineers (3-2 overall, 2-0 in league) broke loose for 28 points in the fourth stanza to close out the conference victory.

“I’m proud of the way we finished,” said ASU coach Scott Satterfield. “We didn’t play well in spurts, but we hung in there. It’s great to be 2-0 in the Sun Belt.”

Jalin Moore sparked much of the offensive renaissance with the third 200-yard rushing performance of his career. Moore finished with 19 carries for 241 yards and two touchdowns on the ground as the Mountaineers ran for a season-high 350 yards and averaged over nine yards per carry.

“We got our running game back today,” Satterfield said.

Quarterback Taylor Lamb (10-of-21 for 48 yards and two interceptions passing, six carries for 79 yards) got things started in the final period when the Red Sea of the New Mexico State defense opened for his 38-yard scoring option scamper to tie the game at 24 with 10:31 remaining.

A minute later, speedy Jason Huntley (three catches for 111 yards, 10 carries for 96 yards rushing) turned a short pass from Aggie QB Tyler Rogers (27-of-50 for 356 yards, two TDs and six interceptions passing) into 61 yards and another go-ahead score at 31-24.

But App State didn’t panic, marching 68 yards in six plays. The final 10 came on Terrence Upshaw’s brilliant cut off the outside zone read play for the senior’s second touchdown of the contest and it was 31-31 midway through the final frame.

Then one of the weirdest plays in a goofy game occurred when Michael Rubino executed a pooched, onside kick that Ike Lewis recovered at the ASU 41. But instead of another possession for the Mountaineers and a further boost of momentum, App State was penalized when Shamad Lomax of the Aggies alertly signaled for the fair catch.

Starting a drive at the ASU 31, the interception bug bit NMSU (1-4, 0-2) again when Duck stepped in front of Jonathan Boone and out-fought the wide receiver for the ball. Duck then weaved his way through the field for 39 yards to the Aggie 29.

On second down, the Mountaineers reached into their bag of tricks again for a double pass from Lamb to receiver Malik Williams and on to Thomas Hennigan. Williams, a high school quarterback, was perfect on his 27-yard throw to the streaking Hennigan in the corner of the end zone and Appalachian led again at 38-31with 5:45 left.

A 45-yard strike from Rogers to Huntley threatened the Mountaineers again on the next drive as the Aggie rolled to the ASU 26. And it appeared that NMSU had converted a fourth and six play into a first down at the 20 when Rogers dumped a pass to a sprinting Huntley who dove for the 10-yard marker.

But a video replay showed that Huntley had gone down a half-yard short and App State’s defense had another key stop with 4:26 to go.

After Moore picked up one first down with a 19-yard burst, he put the game away with his 56-yard romp for six more points. The reigning Sun Belt offensive player of the year had been limited to 47 carries, 136 yards, one TD and a 2.9 average per rushing attempt in the first four games this season.

Moore said a week off since the loss to Wake Forest had worked wonders for him and that he is adjusting to the expectations of being the preseason conference offensive player of the year after last season’s breakthrough success.

“It was a lot more pressure on me,” explained Moore, who is also shouldering additional responsibilities with the graduation loss of ASUs all-time leading rusher, Marcus Cox “I was dinged up in the first two games.”

In desperation mode now, the Aggies received one break when Hayes was ruled to have made a spectacular diving interception on the sideline, only to have the call reversed on review. That reprieve lasted only one play, however, when Duck swiped still another pass to snuff the Aggies once and for all.

Only two Appalachian players had ever intercepted three passes in a single contest, Mark LeGree in the 2008, nationally-televised, Halloween game against Wofford and Larry McKenzie in 1973 versus Davidson. The six interceptions broke the team record of five set against Elon in 1968 and Mississippi College in 1991 and tied the Sun Belt standard established by Utah State versus Arkansas State in 2003.

The Mountaineers will be back in action next Saturday for a 5 p.m. conference game at Idaho.