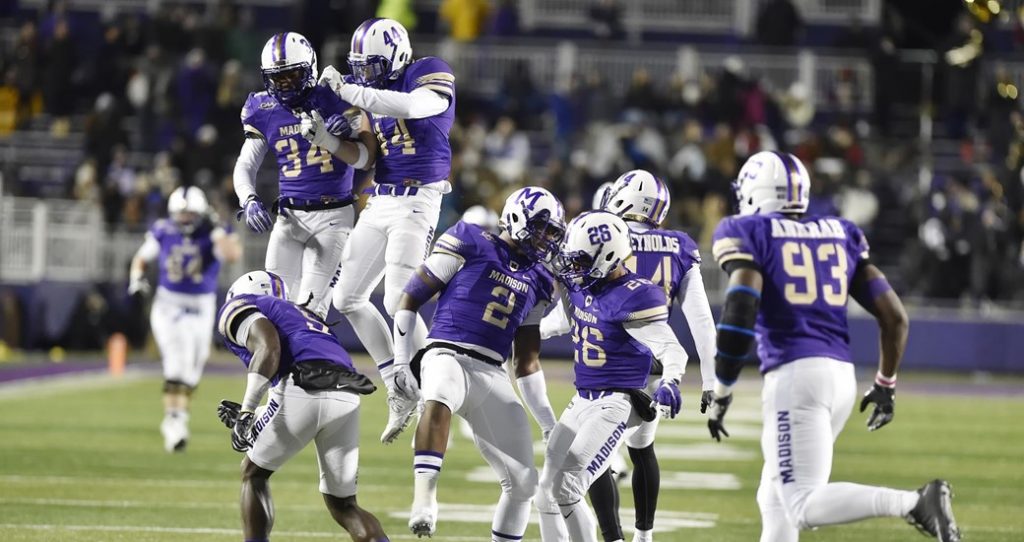 HARRISONBURG, Va. — For one play, everything seemed to be going Sam Houston State’s way in its quarterfinal-round, Football Championship Subdivision playoff game at James Madison.

After tipping a pass and forcing an interception on JMU’s first offensive play, the roof caved in on the previously unbeaten and No. 1-ranked Bearkats in a shocking 65-7 rout to the fourth-seeded Dukes.

JMU (12-1) dominated the game in every aspect, scoring on defense and special teams in addition to shredding the SHSU defense on the way to a 21-0 first-quarter lead and a 42-0 advantage by halftime.

Even the Bearkats, the highest-scoring team in FCS, couldn’t overcome such a start on a cold night at Bridgeforth Stadium before a large and vocal JMU crowd of over 26,000 and an ESPN2 national television audience.

The win — the second largest in subdivision playoff history — advanced James Madison to the FCS semifinals for the first time since the Dukes were the top seed in the 2008 postseason. The victory, coming off last week’s drilling of New Hampshire, was just the second playoff win for the Dukes in five years.

The Dukes lost that last semifinal encounter to eventual national runner-up Montana. James Madison is looking for its first national title since 2004 when it beat Montana.

JMU will meet the survivor of Saturday’s South Dakota State-North Dakota State showdown on Saturday in Fargo, N.D. SDSU handed the top-seeded and five-time national champion Bison their only loss earlier this season.

Sam Houston quarterback James Briscoe — one of the top passers in FCS — was pressured and hit frequently throughout the night as the Bearkats struggled to get into any offensive rhythm. Briscoe was 3-of-16 passing in the pivotal first period, setting the tone for what was to follow.

Briscoe finished 13-of-44 for 143 yards, with two interceptions as he was physically mauled all evening. And even when he could deliver the ball on target, his usually-proficient receiving corps dropped numerous passes.

But even with better offensive precision, Sam Houston (12-1) probably would have had a difficult time slowing down the Dukes, who teamed Khalid Abdullah’s 22-carry, 141-yard, three-touchdown performance with Trai Sharp’s 23-carry, 144-yard, two-TD effort.

Showing tremendous balance out of their spread attack, the Dukes were complemented by a 13-of-17 night from quarterback Bryan Schor, who passed for 251 yards with one score and one interception. Overall, JMU scorched the Bearkats for 607 offensive yards, including 356 on the ground.