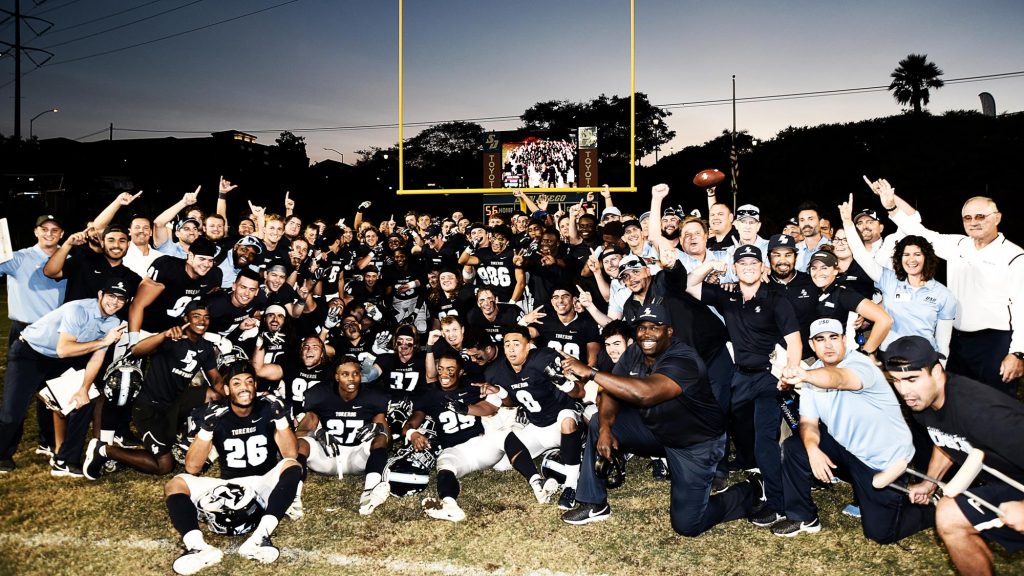 Whatever you thought was true in regards to the qualified teams in the FCS Playoff field last week was almost certainly changed after an epic weekend of upsets.

About the only outcomes that came out as expected were that the three remaining undefeated teams, 10-0 North Dakota State, 9-0 Colgate, and 9-0 Princeton, all won this weekend.

Let’s take a look at what happened and where we stand now.

Kennesaw State and San Diego Win And They’re In

Monmouth briefly leaped out to a 14-7 lead in the second quarter and held Kennesaw State to 17 points at the half before the Owls asserted themselves in the second half.

But San Diego’s (8-2, 7-0)’s path to their conference championship and autobid was only after QB Anthony Lawrence would orchestrate a 3-play, 70 yard drive in the final two minutes. His 20 yard pass to WR Michael Bandy with 1:43 left to play gave the Toreros the final lead after Davidson had already jumped to two different 24 point leads earlier in the game and had given up 789 yards rushing to the Wildcats, which was a single-game FCS record. Four Davidson rushers ran for over 100 yards apiece.

The game only became a clincher for the PFL title because Drake (5-5, 5-2) upset Marist (6-3, 5-2) 13-10 earlier in the day in a game that couldn’t have been more different than the offensive showcase in San Diego.

With 5 seconds left, no one could stop him from finding the end zone 😤

And The Winner of the OVC Is… Jacksonville State?

In this “Murray City Miracle”, the victims were 7-3, 5-2 Southeast Missouri State and the victors were 5-5, 5-2 Murray State, as this most improbable kickoff return for touchdown would give the Racers the 40-38 win. We See You, SoCon, And You’re A Mess

All 5-5 (4-3) Samford needed to do in the second half of their SoCon game against 4-5 (4-4) The Citadel was hold onto their 24-7 lead, and that would set up a straightforward SoCon Championship game next week against 8-2 (6-1) East Tennessee State. But The Citadel had other ideas, outscoring Samford 35-7 in the second half to win 42-27 and throw the SoCon title race up in the air.

Samford cannot win the SoCon title and would be a longshot to make the FCS Playoffs at 6-5, but if they beat East Tennessee State next weekend, it would force at least a tie with 7-3 (6-2) Wofford for the SoCon title and also possibly 5-4 (5-2) Furman, if the Paladins beat 5-5 (4-3) Mercer next weekend. Mercer, too, could theoretically also get to 6-5 and also be under consideration for a longshot at-large bid if they win.

It makes for a fascinating weekend coming up for the SoCon, and nobody knows how the tiebreakers or at-large teams might break out.

About all that’s certain is that many of these teams will be singing the blues once the regular season concludes, wondering what might have been. Which team, or teams, won’t be?

Nicholls: Win and They’re In

Though nothing seems to be able to be taken for granted in the Southland this year, if Nicholls can beat 4-6 (4-4) Southeastern Louisiana in their River Bell Classic Rivalry game this weekend, the Colonels will be the Southland champions. That’s because they beat Incarnate Word earlier in the season. If the Lions pull off yet another upset, the Cardinals will win their first-ever Southland title and make the FCS Playoffs for the first time in their program’s history. (Incarnate Word has next week off.)

The Southland as a whole has a pretty weak hand when it comes to teams that can make it to six Division I wins or playoff consideration in general. Technically UIW and 6-4 (5-3) McNeese State are already there, and the Cowboys could bump their total to seven with a win this weekend. 6-4 (5-3) Abeline Christian and 6-4 (5-3) Lamar can only get to six Division I wins if they are victorious this weekend, and the same goes with 5-5 (4-4) Sam Houston State and 5-5 (4-4) Central Arkansas. But they have pretty weak resumes in general compared to the rest of the at-large field.

Boy, did Youngstown State and South Dakota do a fantastic job at playing spoiler this weekend in the Missouri Valley Conference.

The Penguins’ 31-10 win over Northern Iowa and the Coyotes’ 17-12 win against Western Illinois might have been a mortal blow to several of the conferences’ teams’ chances at an at-large bid.

With 10-0 North Dakota State the autobid recipient, and 8-2 South Dakota State a mortal lock for at-large consideration, there are only three teams that can reach the 6 DIvision I win threshold.

It feels like the winner of the Indiana State/Western Illinois game is going to be a play-in game for the playoffs, even if the Leathernecks end up at 6-5. As for the Panthers, they need to win, and hope for a lot of bubble teams to lose.

Can Elon Break the CAA Tiebreaker Formula This Weekend?

Only one team in the CAA, Maine, has a single conference loss. 7-3 (6-1) Maine, who took care of business 28-9 against Richmond this weekend, also got some help from 7-3 (5-2) Stony Brook this weekend, as the Seawolves’ 17-3 victory over 7-3 (5-2) Delaware put the Black Bears in the driver’s seat for the outright CAA title and autobid.

If Maine can beat 6-3 (4-2) Elon this weekend, they will make a lot of friends in the CAA football offices. That’s because a Phoenix win might create a tangled Gordian knot of a tiebreaker scenario between five different teams with two conference losses. Elon, who cancelled a conference game thanks to Hurricane Florence, pretty much needs to win in order to have a chance (and, oddly enough, a good one) at winning the CAA title and autobid.

And that autobid determination matters, too, because it force a team like Maine or James Madison to qualify as an at-large team, hurting at-large hopefuls in the process.

About all that seems clear is that the winner of the game between 7-3 (5-2) James Madison and 7-3 (5-2) Towson seems like a particularly safe bet to make the FCS Playoffs, either as conference champions or an at-large team. But the loser of that game could be in serious at-large trouble, because Delaware and Stony Brook could, with wins this coming weekend, could get in fairly safe at-large territory with an 8-3 record.

Brawl of the Wild Winner A Play-In Game For Playoffs?

With the wins by 6-4 (4-3) Montana and 6-4 (4-3) Montana State this past weekend, it sure seems like their Treasure State Rivalry game, the 117th all-time meeting between the two teams, is going to be a play-in game for the FCS Playoffs. Helping matters immensely was how 6-4 (5-2) Idaho State lost this weekend 4-6 Cal Poly, which gives the Bengals a lesser resume than both the Bobcats and Grizzlies, who both sport wins against Missouri Valley Conference teams in the hunt for FCS Playoff bids themselves.