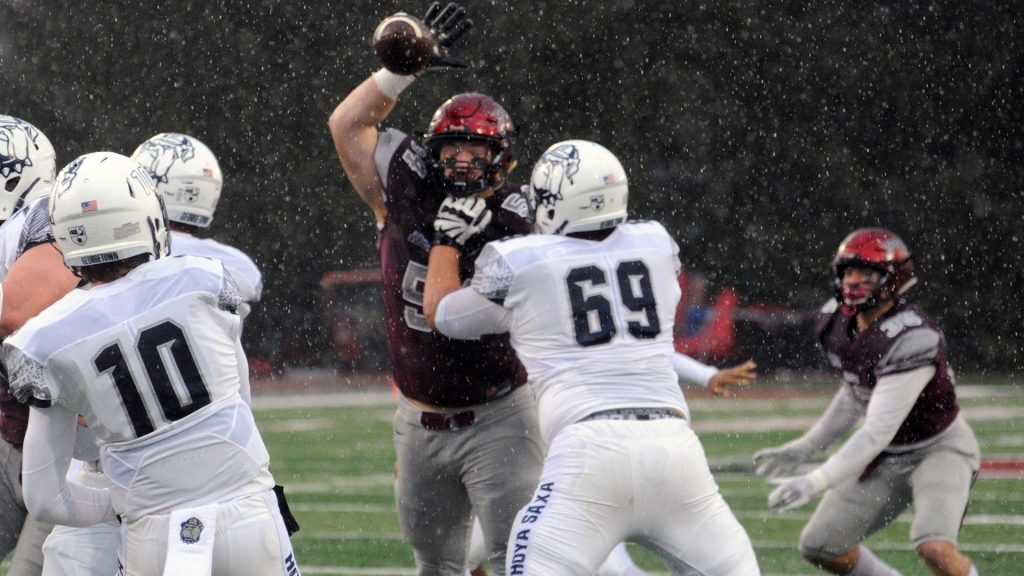 With Colgate’s 38-0 smothering of Georgetown, the undefeated Raiders have not only gone 4-0 in Patriot League play – they’ve gone five straight games without giving up a touchdown, and have only allowed 3 points during that time frame. The only way Colgate could possibly lose the Patriot League title at this point would be to lose to both 1-7 Fordham and 1-7 Lehigh in consecutive weeks – and have Georgetown win their last two games against Bucknell and Holy Cross. Presumably that would also mean that the Colgate defense would actually have to yield some touchdowns.

Here are the highlights of the win over North Dakota. Back home for Sacramento State Saturday for the final regular season home game. #WeAreWeber #BigSkyFB pic.twitter.com/5ubyTMUfba

Did Weber State Punch Their Ticket?

It was a big road game against a nationally-ranked opponent far away, but Weber State’s 35-30 win over North Dakota may have given the Wildcats a playoff bid as long as they hold serve in the Big Sky. Should they win over 3-5 Cal Poly and 1-7 Southern Utah, Weber State would sit at 8-2 with a possible big game to close the year against Idaho State. Could ending the season 3-0 allow the Wildcats to being a seed in the FCS Playoffs?

Anybody Care To Guess? (Missouri Valley)

After that, though… which current three-loss (Illinois State) or four-loss team (Northern Iowa, Missouri State, Western Illinois, Indiana State) might join the Bison and Jackrabbits in the FCS playoff field?

Take for example 5-3 Illinois State. They play 4-4 Northern Iowa, 4-4 Indiana State, and close the season vs. 3-5 youngstown State. Could they lose two of these games? You bet.

Not only are all these teams one or two dangerous losses away from the bubble, there are scenarios where North Dakota State and South Dakota State are the only teams in the conference with fewer than 5 losses. If that happens, does the FCS playoff committee reach into the five-loss teams to pick one team from the Missouri Valley? More?

Anybody Care to Guess? (Colonial Athletic)

Speaking of crazy conference races, if you can figure out who will win the conference championship in the CAA, you deserve some sort of award (and perhaps an advanced math degree).

Five teams (Delaware, James Madison, Towson, Maine, and Elon) have one conference loss. Two others (Stony Brook and Rhode Island) have two conference losses. Adding to the fun is the fact that not every CAA opponent plays each other during the regular season. Chaos! Athletic! Association!

If momentum is any guide, 6-2 Delaware might have the upper hand in the CAA championship race. The Blue Hens have won four straight games to put them atop the CAA for the first time in years. If McNeese State Wins the Southland, They Might Have to Thank LSU And Ed Orgeron

Most weeks, LSU head coach Ed Orgeron is not able to make the trip to see his son, Cowboy QB Cody Orgeron, play.

But this past Saturday, with the Tigers on a bye week, Cody’s father and the rest of the Orgeron family were able to watch his first-ever start at QB against a team that was looking to knock McNeese State from the Southland lead.

Cody would rush for a touchdown to give McNeese State an early 14-7 lead and he’d effectively manage the Cowboys offense to lead McNeese to a 23-21 win, won on a 4th quarter field goal by PK Gunnar Rayborn.

That win gives McNeese a slender one game lead in the Southland, and keeps the Cowboys in the driver’s seat. If they keep winning, they’ll win the Southland’s autobid to the playoffs.