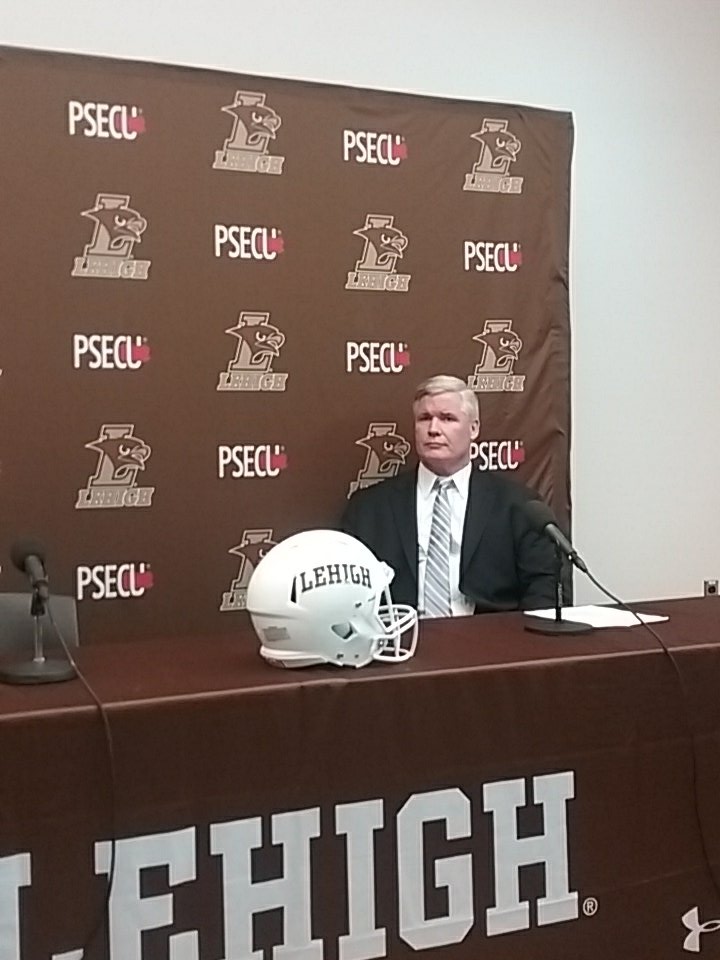 It was an unusual head coaching hire announcement made in unusual circumstances.

After a tough 2018 football season, Lehigh head coach Andy Coen revealed that he was diagnosed with early-onset Alzheimer’s disease, necessitating that he step down in order to fully be able to fight this affliction.

“Life has thrown me a curveball,” Coen said in a release. “I am in the early stages [of early onset Alzheimer’s disease] and it is best for me to eliminate stress and concentrate on my health and well-being. My wife, Laura, and my children, Molly, Nolan and Finn have supported me throughout my career and are my biggest fans. This is a very difficult decision for all of us, but it is what is best at this time.”

The unique nature of Andy’s retirement led to a relatively long search for his successor, done methodically and deliberatively by athletic director Joe Sterrett.

It led to some frustrations, too, among the Lehigh fan base, who literally saw James Madison, Temple, and Elon go through four head coach comings and goings during the time when the Mountain Hawks were looking for one head football coach. (Temple, in fact, hired Manny Diaz and saw him hired away during that time frame.)

But January 9th was finally the day when Lehigh fans finally got to see and meet their new head football coach: Tom Gilmore, who was last seen being elevated to linebacker coach at Wake Forest midway through last year to help the Demon Deacons get to a winning streak and ultimately win a bowl game.

“I’d like to thank President John Simon and Joe Sterrett for giving me this opportunity,” Gilmore said. “Lehigh is a place I’ve always held in high regard. I worked here as an assistant for four years and thoroughly enjoyed everything about that experience; the campus, the athletic department, the community. “

And it meant that the process of finding the head coach meant getting a call from the prior head coach, tied for the most head coaching wins in Lehigh football history.

“We did have a chance to talk late in the process and it was just a great call,” Gilmore said. “We talked about life in general, the football program, what’s changed, what hasn’t. I’ve known Andy for a long time. We have a lot of things in common and share personal connections. He was always one of those guys I always had a ton of respect for and enjoyed our interactions. He will always be part of the Lehigh football family.”

Gilmore is best known to Lehigh fans as a former defensive coordinator at Lehigh, where he spent four seasons, and as head football coach of Holy Cross, a position he held for 14 seasons before being dismissed in mid-season in 2017.

Some of Gilmore’s games against Lehigh were extremely memorable, especially in the early 2000s where the rebuilding Crusaders won three straight games against Lehigh in Bethlehem at Murray Goodman Stadium. One, a 13-10 game in 2005, was won in a rainstorm on a punt returned for a touchdown. Another, a 59-10 shellacking in 2007, held for a long time as the highest-scoring Lehigh opponent at Murray Goodman Stadium.

No other head coaching candidate could have offered the same level of encyclopedic knowledge of the Patriot League in terms of scholarships, coaches, and academics. That’s because he saw firsthand the transition the Patriot League underwent from being an FCS conference offering old need-based aid to becoming one that offers conventional football scholarships, like Villanova or Delaware.

“It’s a comfortable atmosphere at Lehigh,” he told me. “Just walking in here today, the feel you get, is such a nice feeling. That’s a tribute to the program Joe has built here.” Well-known as a fiery competitor as a player and coach, Gilmore talked about how his vast experience in football – and as a parent – molded who he is today.

“It did,” he said, about parenthood mellowing him out – a little. “I was a defensive coordinator when I was here, and [being fiery] worked for us here. I’m a very passionate coach. I still think passion is an important part of everything. You have to have that, without a doubt. But you learn different methods in order to accomplish your goals.”

Gilmore exuded the confidence of someone who was returning home to what was familiar to him – an institution that feels like family, with the prime focus on academics, that has a burning desire to win a lot of football games.

“When you add all the things together, for me, this is a perfect fit,” Gilmore said. “I loved my time here [as a coordinator], and the relationships I had at Lehigh never stopped when I left.”

Watch the full press conference below (courtesy of LehighSports.com).