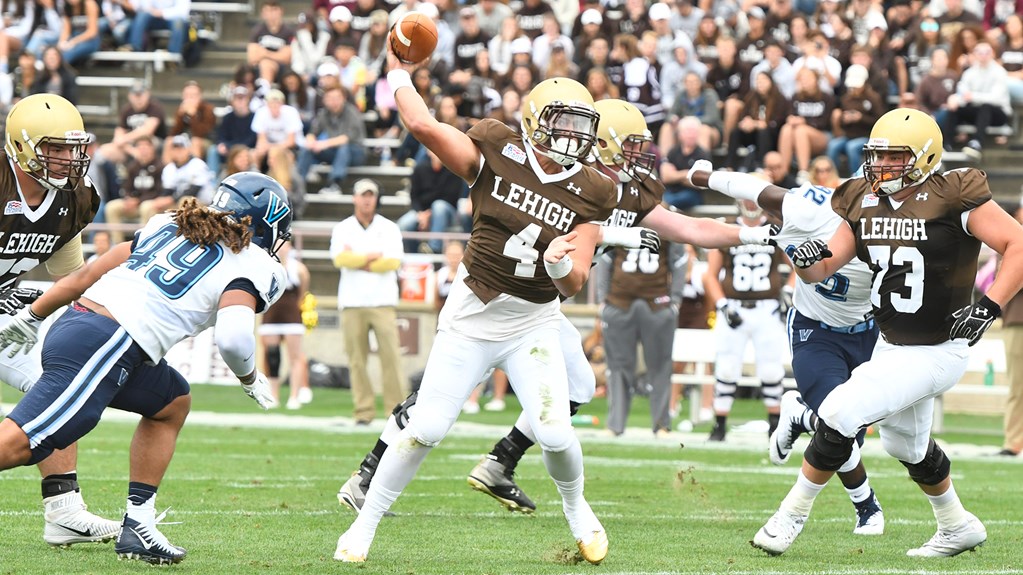 The campuses of Lehigh and Villanova are only separated by about an hour by car – an easy drive up I-476.

The wording in the Lehigh football game notes calls their game against No. 12-ranked Villanova a matchup of “regional rivals”.

Though the Wildcats’ game notes didn’t return the labeling favor to the Mountain Hawks in their version of the pregame release, the truth is this will be the sixth time in the last ten years that Lehigh will have faced off against Villanova on the gridiron.

For Lehigh, games against Villanova have been a valuable opportunity to test themselves against a team that has not all that long ago won an NCAA FCS National Championship, and most years have been nationally ranked in the FCS Top 25.

And for the Wildcats, Lehigh has been the regional rival (with a little r) that they have mostly been able to handle over the years – winning six of the last seven contests, though their last two meetings were determined by a grand total of eight points.

It has resulted in the blossoming of a regional rivalry that has been, for the most part, good, entertaining football, especially in the last few years.

Nationally-ranked Villanova enters this game 1-0 after their FBS upset last week over Temple, 19-17, which propelled them to 12th in the nation.

And Lehigh also enters this game 1-0 after a hard-fought, physical battle against St. Francis (PA), 21-19 victors after a blocked field goal in the final minute.

“We will definitely have our work cut out for us stopping an explosive offense like Lehigh,” Villanova head coach Mark Ferrante said in the CAA coaches’ teleconference this week. “Lehigh put more points up against us a year ago more than anybody else we faced last season, so we just have to go in there and make sure we play good assignment football, cover the gaps and hopefully we can be successful in stopping the run and try to make them a little bit more one dimensional. I know our defensive guys will be up for the challenge. Our players will be excited to go out there and play.”

“I watched the tape of their defense, and it’s going to be a tough game,” Lehigh head coach Andy Coen said this week. “We need to meet their toughness with ours.”

In the past few years there has been a bit of extra juice involved in this game, despite the fact that Lehigh competes in the Patriot League and Villanova competes in the CAA.

Coen’s first-ever coaching victory came against Villanova, a come-from-behind 31-28 win that caused opposing head coach Andy Talley, who privately hated to lose to Lehigh, to call for Sunday morning practice for his team that lost that afternoon.

Since then the torch has been passed from Talley to longtime assistant Mark Ferrante, who hasn’t skipped a beat coaching the Wildcats two years after Talley’s retirement.

In 2017, Lehigh faced off against Villanova in the season opener for both teams.

Both teams were nationally-ranked at the time and, like this year, were eager to prove to the rest of the nation who the best team was from Eastern Pennsylvania.

Though the Mountain Hawks never led, eventually falling 38-35, it was a nip-and-tuck offensive show featuring Villanova QB Zach Bednarczyk and Lehigh QB Brad Mayes guiding their respective offenses to a combined 959 yards of total offensive yards, a hugely entertaining game that was in doubt deep into the contest.

With 4:43 left in the game, Mayes found WR Gatlin Casey for a 3 yard TD strike to cut the Wildcats’ lead to 3 points. But Bednarczyk then earned three first downs for Villanova’s offense against Lehigh defense, including a back-breaking 9 yard run on 3rd down to seal the deal.

“I’m not looking at this game as any type of moral victory,” Coen said after that loss in 2017. “What we’ve been here for a long time is winning football games and we had an opportunity to win a game today and we didn’t get it done.”

Bednarczyk’s season came to a close shortly after his impressive 209 yard passing, 72 yard rushing day against the Mountain Hawks last year – a knee injury against Towson ended his season.

But he looked completely recuperated from that injury against Temple, completing 72% of his passes versus the Owls and passing for all three scores.

“Zach has always been pretty good with his accuracy before he got hurt last season,” Ferrante said. “I think he was a little bit better than that this past weekend and the fact that he is athletic enough to extend those plays.”

It’s very unclear what type of game to expect this Saturday. Both defenses are coming off of extremely solid perfomances last week, with Villanova picking off two passes to seal the deal against Temple, and Lehigh only yielding 50 rushing yards versus St. Francis (PA). But both offenses, too, have demonstrated that they both have firepower they are waiting to use.

There isn’t always a trophy for being the best in your state or region, but there was a feel in this game that some sort of mythical eastern Pennsylvania title was up for grabs, and Villanova won it.

And it’s games like this, between like-minded schools with FCS-level programs, that are the best part of college football – battles for the higher ground in recruiting, the FCS Top 25, and area dominance. There’s a little extra passion in the air that simply wouldn’t be there against a more far-flung school.

With a yearly scheduling deal that extends to 2021, both Villanova and Lehigh seem to agree on that point.