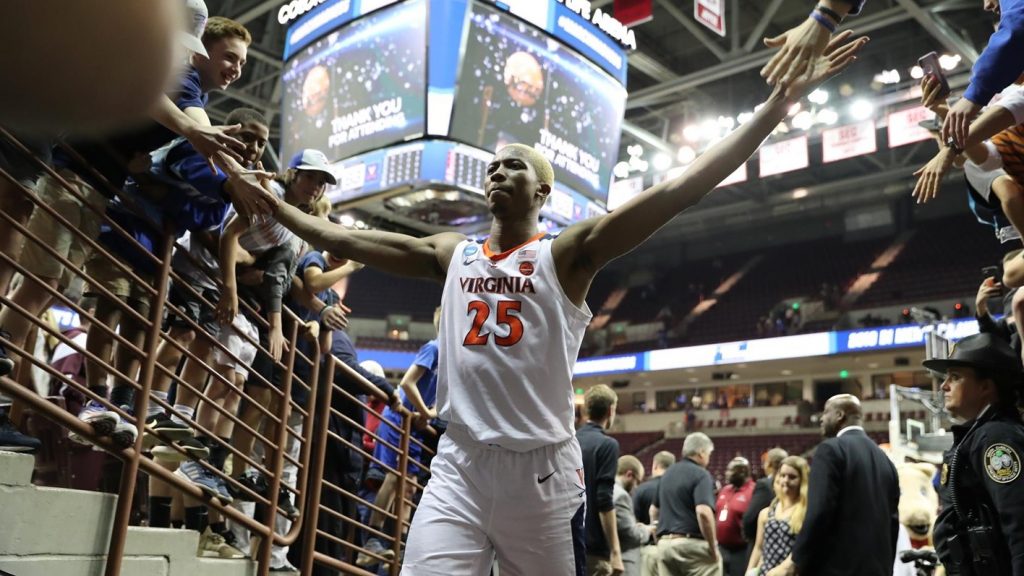 COLUMBIA, S.C. — There might have been doubts about how big-game ready the No. 1 seeded, South Region Virginia Cavaliers were for the NCAA Men’s Basketball Tournament after last year’s first-round exit to Maryland-Baltimore County and Friday’s nervous performance in the first half against 16th-seeded Gardner-Webb.

But the Cavaliers delivered a huge statement to the rest of the field in Sunday night’s second round with their 63-51 dismantling of No. 9 Oklahoma. This Virginia team is ready for the long haul.

Trailing 9-3 and 13-9 early, the Cavaliers exploded for a 14-2 run, using clutch shooting inside and out and their trademark, man-to-man defense to cool off the dangerous Sooners and advance to the Sweet 16.

Big man Mamadi Diakite made the most of a rare start with 14 points, nine rebounds and three blocked shots, while guards Ty Jerome and De’Andre Hunter chipped in with 12 and 10 points each to lead Virginia past what had been the troublesome early rounds in recent years.

“I thought these guys really came to play,” said Virginia coach Tony Bennett. “They played for each other defensively. They did it at the end of the first half (and) all through the second half against Gardner-Webb, and then all game they just rotated and covered and made it hard for Oklahoma.”

Oklahoma loomed as a sizable challenge after blowing out Mississippi in the first round with its balanced offense, but the Sooners were no match for the smothering defense of Virginia.

Brady Manek and Christian James paced the Sooners with 13 points apiece, but the Cavaliers limited Oklahoma’s Kristian Doolittle, the star of Friday’s performance, to eight points on a night where OU shot 36.5% for the game.

The biggest key was the extended role of Diakite, the 6-foot-9 junior center from Guinea, who seems to be growing in confidence game-by-game.

“He started the second half against Gardner-Webb and we thought maybe he could play one-on-one against Doolittle,” Bennett explained. “What we wanted to do offensively, I thought there was some more scoring opportunities for how we were going to attack for Mamadi, how to roll and get on the rim and make some plays. And then his quickness, I thought might be a factor. That’s the reason why, and that was planned on.”

Diakite was more than up to the challenge.

“I was locked in, and I was trying to respond to the challenge coach gave me,” Diakite said. “He started me tonight and I wanted to prove him that I was ready to play. So I did so.”

“They’re really good,” Kruger said. “I thought we had a rhythm on our offensive end. I thought they did what they wanted to on their offensive end. As they do, they dictate to you, and we didn’t fight that quite well enough.”

Up next for Virginia is an encounter on Thursday night against upstart Oregon, the No. 12 seed. But the monkey of under-performing on the big stage seems to be a thing of the past for Virginia.

“Only the guys in the locker room and the coaching staff who were part of last year’s team and this year’s team can truly appreciate and understand,” Bennett said. “You know, we tried to get back to this spot. Even to be a one-seed and then to have to go into the situation and to be down in that game, definitely pressure in terms of the game. So that was real. You could feel it. And to show the resilience to kind of get through that.”

Bennett has tried to even find some humor in Virginia’s historical plight.

“There’s pressure and excitement and tension to try to advance in this tournament, that’s always there, but it was a different feel,” Bennett said. “It’s unlike anything — well, no college basketball team really in the history of the game has had to go through that. It’s our doing. We were the first one-seed to lose (in the opening round) last year and then all of a sudden to fight back and become a one seed, and then to be in that situation again. You talk about trying to focus in and then getting down, it was real. So I think those guys will have that as something they can always draw upon to say we faced a giant and battled through it.”