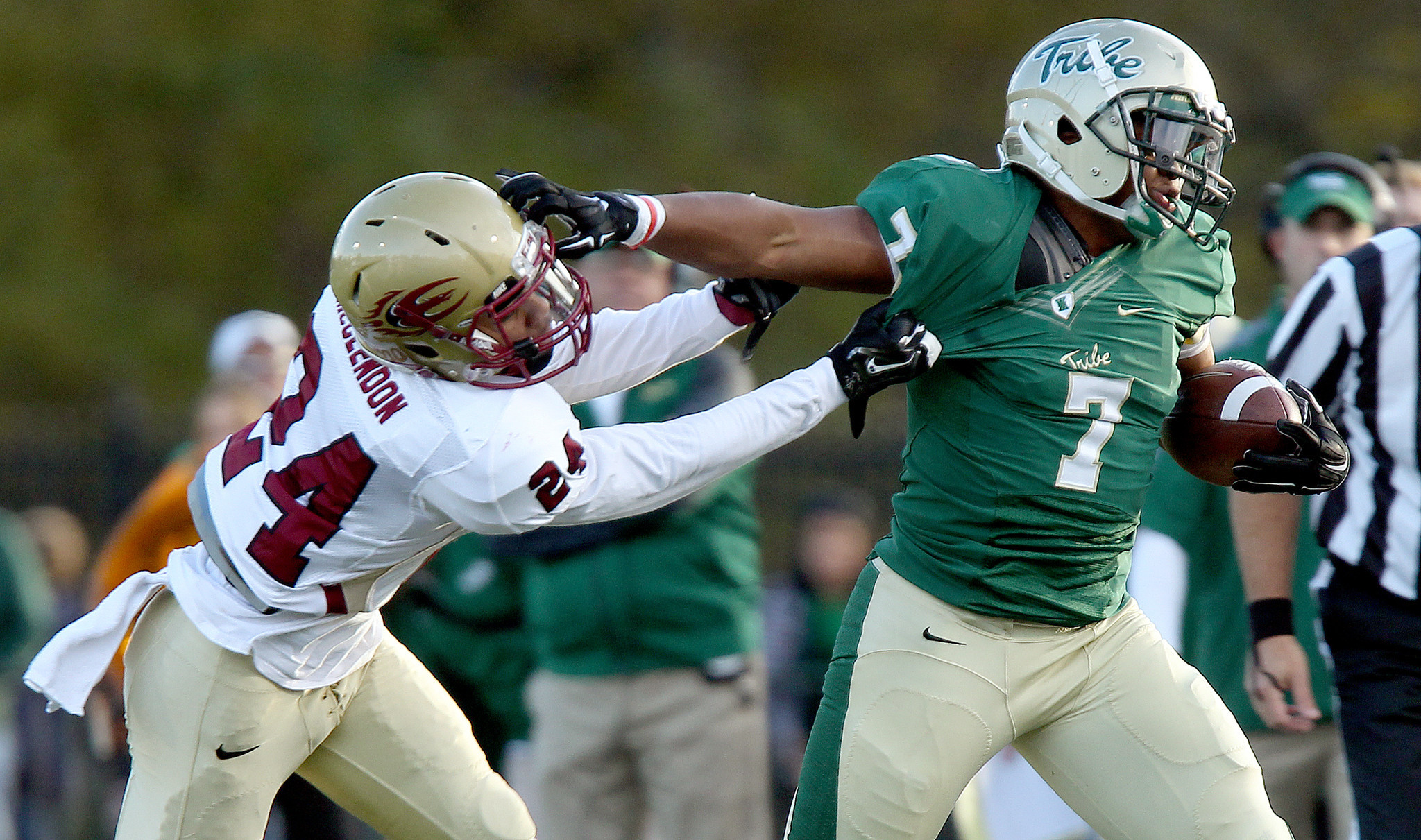 ELON, N.C. — William & Mary couldn’t have asked for a much better start Saturday in what Tribe players and coaches viewed as a trap game against one of the Colonial Athletic Association’s bottom-feeders, Elon.

Coming off last weekend’s emotional 44-41 victory at home against James Madison, — a game where William & Mary trailed by 11 points four separate times — the Tribe scored what amounted to a first-round knockout of the struggling Phoenix, scoring 21 points in the first nine minutes of the first period on the way to an easy 34-13 victory.

However, the statistics didn’t reflect the Tribe’s dominance in this game.

“At this stage of the season, when you are playing a CAA game, I don’t think you can complain about any win,” said veteran William & Mary coach Jimmye Laycock, now in his 36 years as the Tribe’s coach. “I don’t know how well we played. We were efficient for the most part, we jumped on them early.”

With two games to play, at home against Towson and on the road at arch-rival Richmond, the Tribe have positioned themselves to potentially win the conference automatic bid by winning out and to be a big player when the Football Championship Subdivision playoffs begin.

“This is already a special team,” said the pragmatic Laycock, deflecting a question about the Tribe’s chances of making a national championship run. “We’re playing meaningful games in November, we’ve have won seven games and that’s what you shoot for.”

William & Mary came out with all of its offensive barrels blazing, needing only nine plays to travel 69 yards for its touchdown on the opening drive.

Kendall Anderson (14 carries, 68 yards rushing) finished things off with his 19-yard TD spurt to make it 7-0 just over four minutes into the game.

When Elon committed its first of four turnovers on its second offensive play as quarterback Daniel Thompson fumbled on Peyton Gryder’s sack and Zach Fetters recovered at the Phoenix 26, the Tribe was in business again.

Five more plays resulted in another touchdown as All-American Mikal Abdul-Saboor (12 carries, 71 yards rushing) smashed in from the one, increasing the lead to 14-0.

Elon’s quick three and out on its next offensive series resulted in more trouble for the Phoenix.

Speedster DaVonte Dedmon scooped up David Petroni’s rugby punt like a third baseman snagging a slow-hit grounder and raced 70 yards with the punt return for William & Mary’s third touchdown of the quarter.

“I saw it come off his foot and that’s like gold,” said Dedmon. “I just had to get it and go. They look to me for that kind of stuff.”

Two Nick Dorka field goals from 34 and 35 yards capped off second-period drives as the Tribe rolled to its 27-point halftime advantage.

Malcolm Summers (16 carries, 62 yards rushing) scored on a pair of two-yard second-half rumbles in the second half for Elon, bookending Steve Cluley’s 33-yard scoring strike to Matt Sniezek in the third period.

That was one of the few highlights for the Phoenix, along with Christensen coming off the bench to complete 28-of-45 passes for 310 yards and Alexander Dawson’s block of Dorka’s 22-yard field goal attempt in the fourth quarter.

Cluley, a senior who has experienced his share of ups and downs during his Tribe career, hit on 22-of-32 passes for 222 yards, with no turnovers and no sacks.

About the only negative for Cluley was an under-thrown pass to tight end Daniel Kuzjak after a brilliant play-fake had freed Kuzjak for an apparent touchdown. Even then, Elon was called for pass interference on the play to set up a scoring chance.

“I thought Steve threw the ball pretty well,” said Laycock, a notorious critic of quarterbacks, who has developed a slew of talented performers at that crucial position.

Cluley said that the Tribe was determined to get out of the gate fast to avoid any letdown.

“We knew that coming into this game, after how we beat James Madison last week, that we needed to get off to a quick start,” said Cluley. “We knew this was somewhat of a trap game for us.”

With 21 points in nine minutes, the bait was quickly removed from the trap as William & Mary won its fifth consecutive game and seems to be peaking at the right time.

Laycock has won five titles in the Atlantic 10 and the CAA and has taken the Tribe to 11 postseason appearances — including two trips to the NCAA semifinals. About the only thing missing from his resume are a trip to the title game and a national championship.

But in a topsy-turvy season where five different teams have been ranked No. 1 in various polls and there doesn’t seem to be a clear favorite for the national crown, this could finally be Laycock’s and William & Mary’s year.

“We just have to go out and win games,” said Laycock, taking an old-school approach. “We’re playing with a great deal of confidence.”