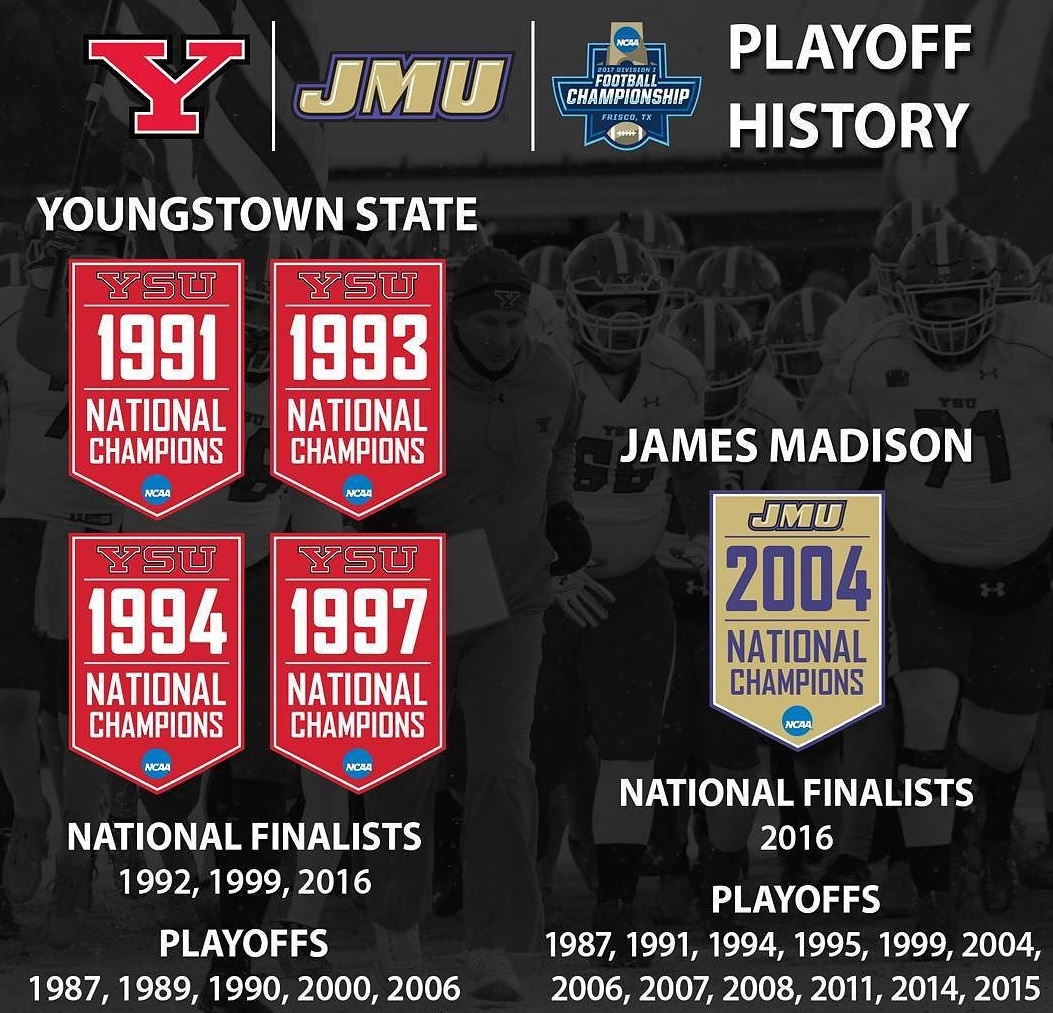 FRISCO, Tex.–The two teams outlasted their competition throughout the playoffs and earned the right to compete for the FCS title are James Madison and Youngstown State—two teams that at the start of the season, few would have thought would still be playing.

James Madison entered the playoff as the four seed and eliminated New Hampshire, #5 Sam Houston State, and #1 North Dakota State to punch a ticket to the championship game.

Youngstown State was unseeded heading into the playoff and has defeated Samford, #3 Jacksonville State, Wofford, and #2 Eastern Washington on the way to the big game.

One thing both schools have in common is that they defeated higher seeds in the semifinals on the road—which is no easy task against the top two seeded teams.

Another thing the two have in common is that now like to run the ball first and play strong, aggressive style defenses.

The two also play in at least by the Sagarin rankings in the top two FCS conferences in the country in the Colonial Athletic Association and Missouri Valley Football Conference respectively.

The last time Youngstown State and James Madison met was in the first round of the FCS Playoffs in 2006—the last playoff appearance before this year for the Penguins. Youngstown State won 35-31, thanks to 15 unanswered points, including the game-winning touchdown with 1:12 left on the clock.

The FCS Championship will be the fifth meeting between the two programs, with YSU with the overall edge 3-1n the prior meetings.

The Dukes (13-1) advanced to the title game after defeating North Dakota State in Fargo. The win ended NDSU’s 22-game win streak in the playoffs in what was its first postseason loss in 2,198 days and first time in the Fargodome history for NDSU. It was the first postseason loss for the Bison at home since 1991. Khalid Abdullah rushed for 180 yards and added 51 receiving yards and a touchdown, while Bryan Schor passed for 242 yards and three touchdowns.

The Penguins (12-3) punched their ticket to Frisco in thrilling fashion, scoring a touchdown with one second remaining, to beat Eastern Washington 40-38 in Cheney, Wash. Hunter Wells found Kevin Rader in the back of the end zone, who made a sensational catch off the back of a defender for the game-winning score. YSU outscored EWU 20-7 in the final quarter to complete the comeback.

For their respective conferences, each has a recent championship history. NDSU provided the MFVC with five straight titles while the CAA was the national power before that string. Four different CAA programs have won titles since 2003 including James Madison in 2004, gives the conference a ninth finalist in the 14-year period.

These two power FCS conferences didn’t meet in the regular season. Each had four teams qualify for the playoffs with each going 7-3 to date and splitting two games against each other— South Dakota State edged Villanova in the second round and the aforementioned James Madison semi-final win over NDSU.

This game likely will come down to who can run the ball better against the opposing stringy defense and who will win the turnover margin.

YSU’s Jody Webb rushed for more than 100 rushing yards in the four playoff games and is averaging 157 on the ground in these contests, while JMU’s Khalid Abdullah had 231 yards from scrimmage in the Dukes’ semifinal win.

Youngstown State ranks third in the FCS in average time of possession (34:02), and the Penguins get it done with the run game more so than James Madison. The Dukes are more balanced offensively behind Schor’s run-pass skills.

In the coaching breakdown it is YSU’s Bo Pelini against JMU’s Mike Houston. Both headmen they’ve filled their staffs with experienced assistants – both on the FBS and FCS levels. Pelini has the edge as he previously guided FBS Nebraska to several bowl games so he understands how to play in the neutral site setting. Houston is in his first year with the Dukes.

James Madison, however, has been the most complete team in the FCS, from a high-powered offense and athletic, opportunistic defense. Youngstown State, which has beaten No. 2 seed Eastern Washington and No. 3 seed Jacksonville State on the road, also has significant talent outside the quarterback position, and junior Hunter Wells has stepped in during the second half of the season to provide consistency—going 7-1 in his starts.

Presumed NCAA suspensions will also play a role in this game and I think this may catch up to the Penguins a little more. YSU lost fewer players (five) than JMU (seven), but it includes second-leading rusher Martin Ruiz; leading yardage wide receiver Darien Townsend, and safeties Jameel Smith and LeRoy Alexander, who are two of their top three leading tacklers. JMU’s losses include leadking tackler in linebacker Brandon Hereford, and second leading wide receiver Terrence Alls.

I like the talent on James Madison but I think Pelini will keep the game close with his knowledge of preparing for a game like this. I will take the Dukes by a touchdown in a relatively low scoring game.