FRISCO, TX – Parody twitter accounts are generally a pretty good indicator that you’re a well-known star in your chosen field.

In the FCS National Championship game, for the first time ever, both head football coaches have active parody accounts maintained by passionate fans of college football.

Though it might feel a bit a strange form of praise, it very much is a great acknowledgement of the fantastic job both head coach Bo Pelini and Mike Houston have done at Youngstown State and James Madison respectively.

What is even more extraordinary is that the real Pelini, in his second year at Youngstown, and the real Houston, in his first year in Harrisonburg, have made their teams into national championship contenders in such a short time.

So many years have gone by in the FCS National Championship that the presence of the North Dakota State Bison heading to Frisco seemed like a foregone conclusion. Instead, it is one of their conferencemates (Youngstown State), and the team that finally was able to solve the Bison in the Fargodome (James Madison) that are there in their stead.

And both Pelini and Houston did so as relative newcomers to their respective programs. They’ll be playing this Saturday at noon Eastern in Frisco, Texas, in front of a national audience on ESPN2, to find out which one achieved their goal this season to be national champions.

According to Terry Pluto of The Cleveland Plain-Dealer, Bo Pelini’s main reason to returning to Youngstown was to come back home.

Pelini had just been dismissed from Nebraska after an “unsuccessful” 9-4 season. After a meteoric rise through the NFL and elite college football ranks, followed by an emotional dismissal from the program, Pelini needed to head back home and regroup. 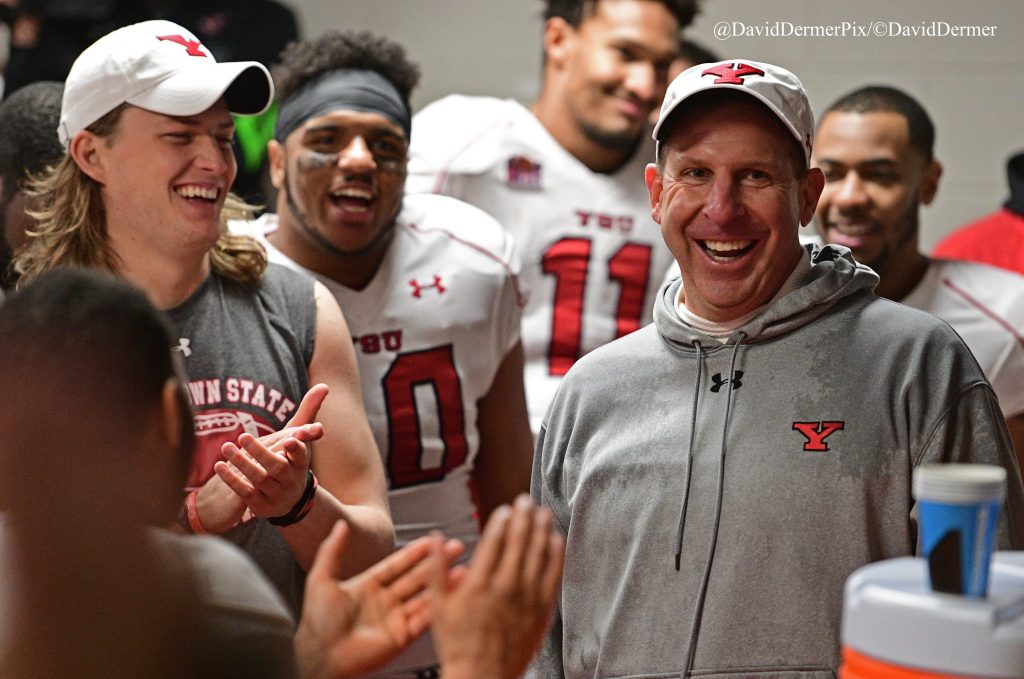 Pelini was the everyfan coach, the guy who felt every sack of his quarterback and the guy who wasn’t afraid of telling his players what he thought after each play. In a world of corporate doublespeak from the head guy, where an emotional detachment is seen as a positive, Pelini was a breath of fresh air. If a you were a college football fan who lives and dies emotionally by every first down and turnover, Pelini seemed to embody you. He was so close to the emotional core of so many football fans – which may have been why Nebraska saw him as a threat.

“Even before learning of the opening,” Pluto’s column states, “Pelini and his wife of 21 years had been talking. He had met Mary Pat at Cardinal Mooney. They were already considering a move home to Youngstown. Then the YSU job came open.”

According to Pluto, it was Pelini who called Youngstown once he learned that head coach Eric Wolford was being dismissed from the program.”

My father (Anthony Pelini) raised eight kids,” Pelini said. “All eight of us went to Catholic schools. All of us graduated from college. He was a pharmaceutical sales man, very hard working and disciplined.”

It was hard not to see the irony of the dismissal of Wolford, who had three consecutive seven win seasons but zero FCS playoff appearances, and the hiring of Pelini, who couldn’t get over the high hump at Nebraska.

“What interests him is coaching, whether at the pro level (as an assistant at San Francisco, Green Bay, New England) or at Nebraska, LSU and Oklahoma,” he continued. “He seemed interested in being back home and improving in his ability to be a head coach.”

“His son is a senior at Cardinal Mooney and is a good player,” Tressel added. “He has a couple of daughters, and he loves raising them in the hometown of both he and his wife.”

After an adjustment year of 5-6 last season, this year’s group really coalesced after a tough 24-3 loss at North Dakota State this season, where the Penguins truly had to win out the rest of their games to be guaranteed a playoff spot.

Not only did they do so, they clinched their trip to Frisco in the most exciting way possible.

With one second remaining, quarterback Hunter Wells rifled a pass to Kevin Rader’s with no time left on the clock. His one-handed touchdown catch in the back of the endzone – seemingly an impossible catch, every time you saw the replay – the Penguins completed a 40-38 comeback victory on the road over Eastern Washington.

“I almost screwed it up,” Pelini admitted afterwards. “I was trying to milk the clock a bit, but also use the timeouts,” he added. “But on the play before, Hunter took a long time — like he was out for an afternoon stroll. But like I said about picking each other up, they picked up their coach, because I probably should have used a timeout earlier.”

The win put Youngstown State at 12-3 – and, unlike Nebraska, on the brink of a national championship, a fact that did not escape the gaze of Pelini’s biggest fan.

[UPDATE: Faux Pelini has a preview of the FCS National Championship game here. Sort of.]

James Madison clearly had a lot of football talent in 2015. Under former head coach Everett Withers, the Dukes had soared to a 9-2 record as well as a co-championship in the CAA.

But Withers was interested in an FBS head coaching job instead at Texas State, which opened up in January and left the Dukes somewhat in the lurch in terms of a head coaching vacancy.

Quickly James Madison Jeff Bourne sprung into action, securing Mike Houston of The Citadel in late January to take over. It’s not like Bourne was unfamiliar with the process; just two years ago, Bourne terminated the contract of legendary head football coach Mickey Matthews, and hired Houston.

“Certainly I thought, and still feel, that JMU is a special opportunity,” he told The Richmond Times-Dispatch this week. “I think it’s one of the top jobs in the country at the FCS level.”

It would also mean that this year’s seniors would have seen three different head coaches during their time on campus.

“Change is always going to happen,” James Madison wide receiver Brandon Ravenel said in the preseason. “And as a team, we’re used to change. It’s different, I guess, but Coach Houston is an unbelievable coach, an unbelievable guy, and I look up to him a lot. He’s doing a great job handling everything that’s going on right now.” 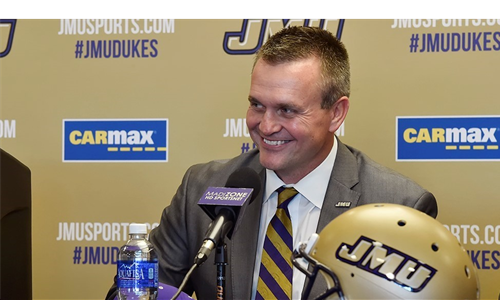 It wasn’t a foregone conclusion that Houston would be able to take Withers’ players and mold them into a national championship-caliber team, but that’s exactly what he did.

“When I got here, it was a very divided locker room, and it was one where there was no confidence and no cohesion defensively,” Houston said. “And the attitude of the offensive players was that the only reason that there was any success was because of them. So it was not a good situation.”

He also focused on something else – being more physical than their competition.

“He kind of made a point of toughening us up,” quarterback Bryan Schor said. “It’s definitely something we worked on during the fall — we had a really challenging camp, with tough elements. He just pushed us really hard. And I think it’s made us ready for this.”

In another way, it’s what he didn’t do that might have been a part of the key to the Dukes’ success.

Houston, who had done well at The Citadel running the triple option, quickly affirmed that the offense at JMU wasn’t going to be a mirror copy of what he did with the Bulldogs.

“Coming to James Madison, our philosophy will be different because we can recruit different kinds of players,” he said. “Will we keep some of the aspects in our offense? Sure. But we’ll operate primarily out of the shotgun and be a more traditional spread offense.”

With two easy opponents to start the season, Houston quickly dispelled any notion that the Dukes were going to tinker when it wasn’t necessary, leaping out to an 80-7 win over non-scholarship Morehead State.

In fact, Houston’s teams would score more than 50 points a game an amazing seven times during their 13-1 season, none more comprehensive and satisfying than JMU’s 65-7 win over highly-regarded Sam Houston State in the quarterfinals.

“There was no doubt in my mind that we were going to play well tonight,” Houston said after that game, after a pregame speech caught on ESPN3 said how they wanted to challenge SHSU’s will to compete in the football game. 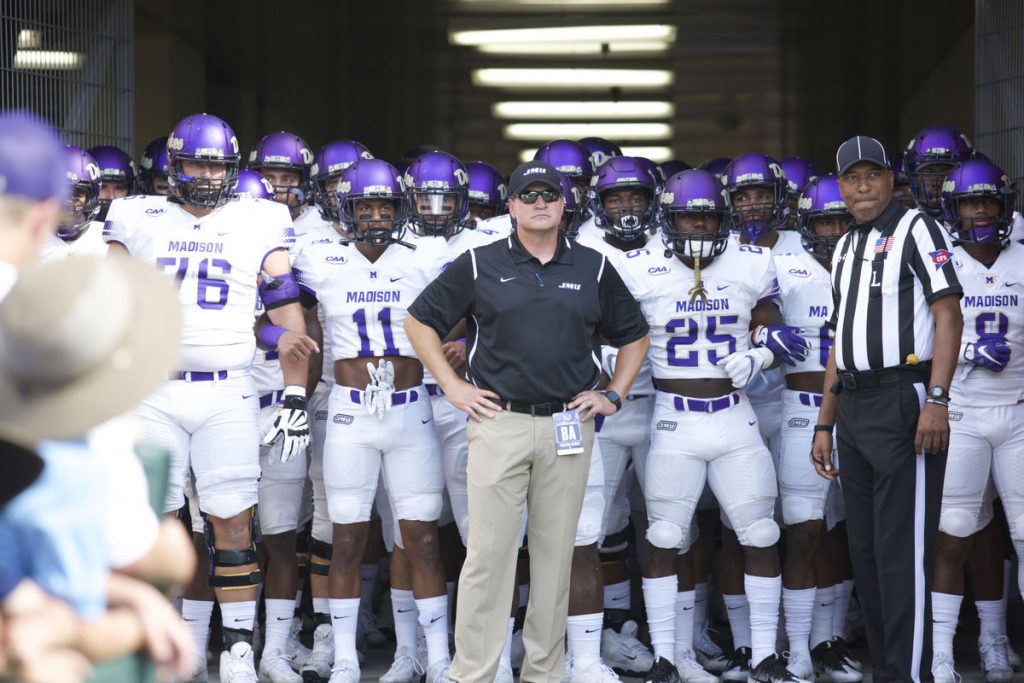 It is hard to understate how difficult it is to inherit a team that late in the offseason, unite the locker room, guide the team to a 10-1 regular season record (with their only loss to bowl-bound UNC), and then win a tricky postseason game at the Fargodome, the place where countless FCS playoff dreams had gone to die.

But Houston not only has done so, he’s on the brink of bringing James Madison their first FCS National Championship since 2004.

And Mike Houston’s parody account was on the case with the picture of one of North Dakota State’s most famous alumni, Philadelphia Eagles QB Carson Wentz. 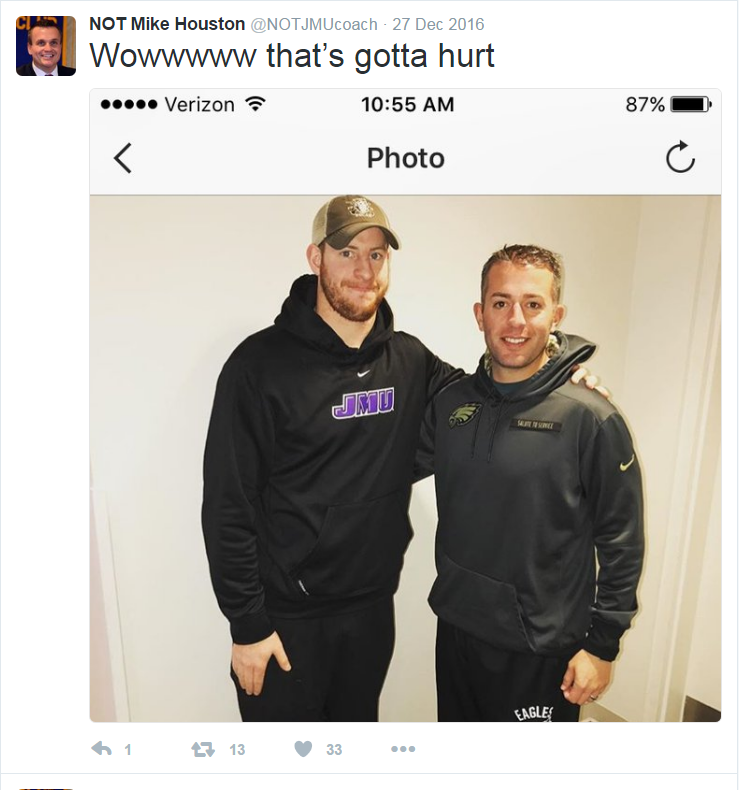