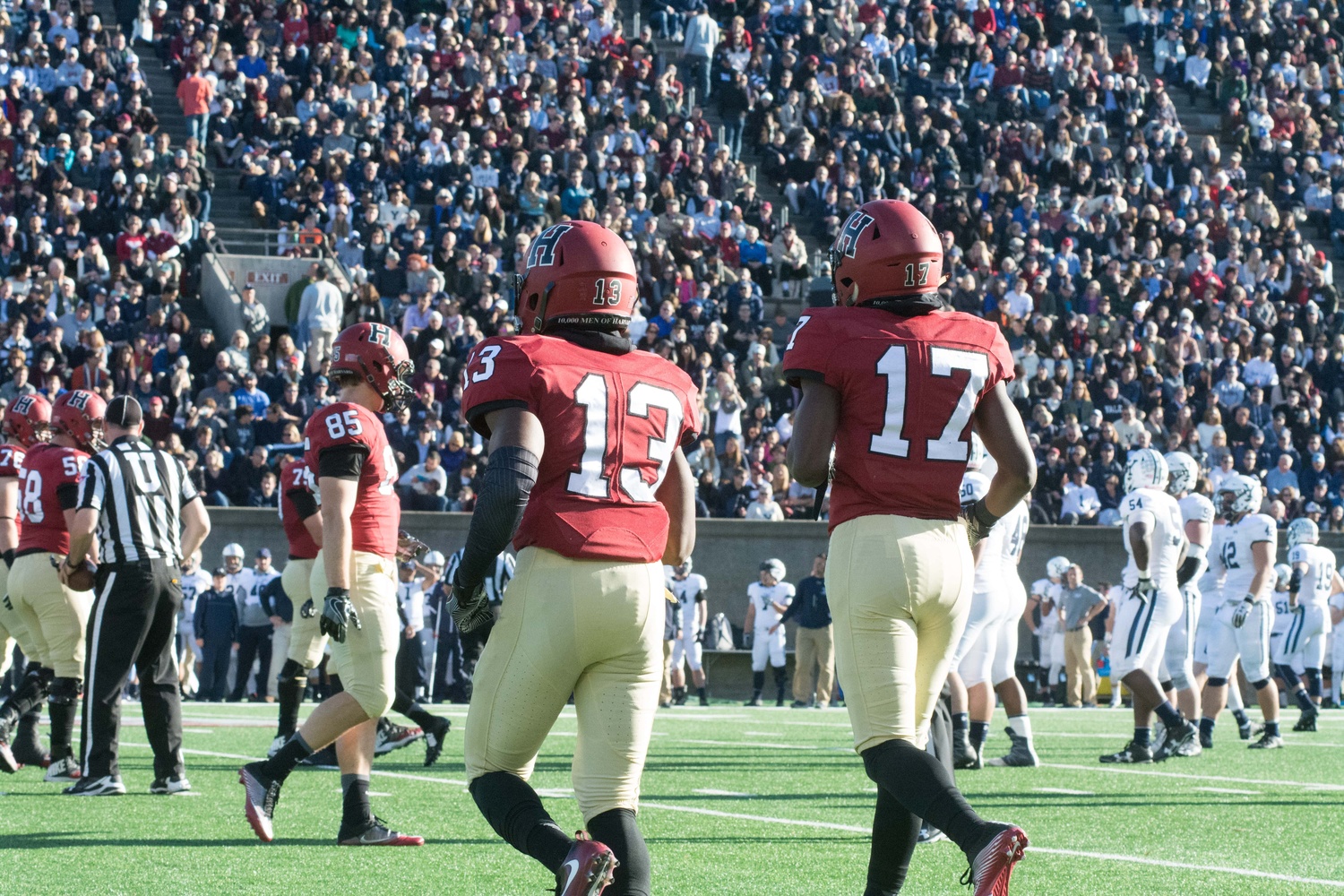 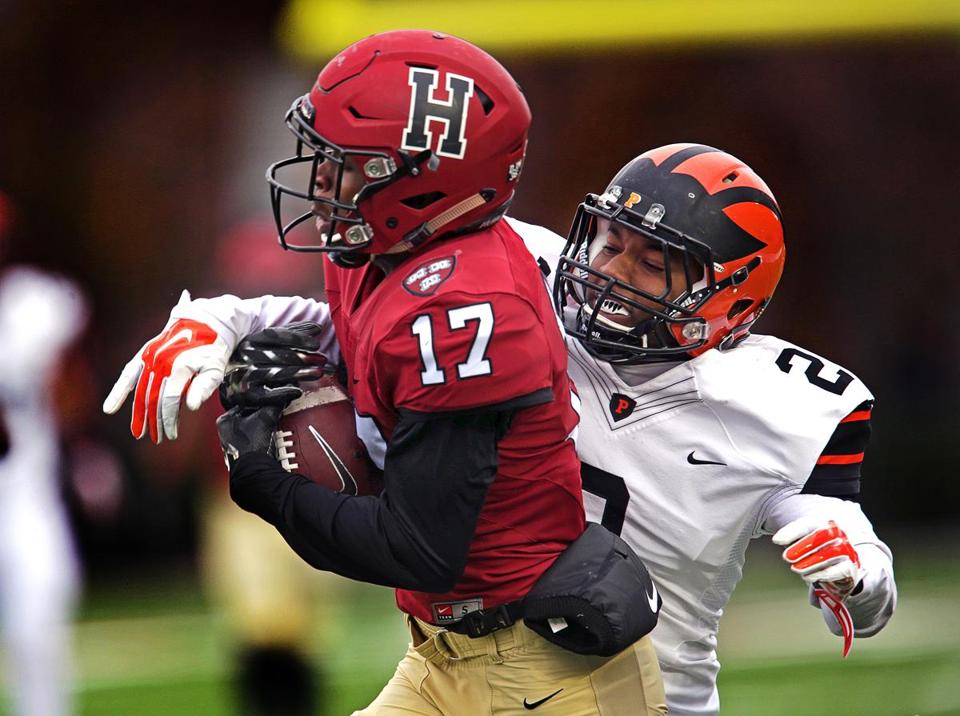 Fearless Prediction: How bitter must this Crimson team have been this offseason? Last year, they had yet another Ivy League Championship almost wrapped up in Week 8… and then proceeded to lose a must-win game at Penn (27-14) and then proceeded to lose to their historic Rival Yale for only the second time in a decade (21-14) to fall out of a possible co-championship. As always, Tim Murphy’s team is stacked with some of the best talent in all of FCS. The question is how they react this year to last season’s late collapse.

Impact player: Only a sophomore, WR Justice Shelton-Mosley has gone from northern California high school standout to FCS standout, become an all-purpose weapon on both offense (589 yards receiving, 6 TDs) and special teams (521 yards, 1 TD), and folks are gushing about the type of player he can be for the Crimson as he continues to get better.

Fearless Prediction: As agonizing as Harvard’s season was, Penn’s was dreamlike. After starting out 0-2 versus Lehigh and Fordham, the Quakers would win seven of their last eight games to earn an Ivy League co-championship with Harvard – head coach Ray Priore’s second straight co-championship. Can Priore get a third straight Ivy League championship, though, with the graduation of QB Alek Torgerson?

Impact player: WR Justin Watson will be looking to pad his already-well-padded NFL resume with a stupendous senior season. He’s already broken Penn’s receptions record (89) and yardage record (1,115) and the 6’3, 220 lb senior will be adding to that total this year.

Fearless Prediction: The Tigers really pulled it together after a slow start, squeezing past Lafayette and coming close to being upset by Georgetown, but Princeton’s fast-break offense really started to kick into high gear during the Ivy League schedule, allowing Bob Surace’s team to capture the co-championship with Penn (and beating the Quakers head-to-head). The question is whether it will be preseason Ivy League player of the year John Lovett, or dropback quarterback Chad Kanoff running the offense – Lovett had surgery for an unspecified injury early in August, and it’s an open question as to whether he’ll return this season. And don’t underestimate the impact the change at offensive coordinator – James Perry, now the head coach at Bryant, left after last season.

Impact player: Less talked-about at Princeton is the defense that set up their second-half success, and DE Kurt Holuba was a big part of that success, getting 6 1/2 sacks in conference play to end the year, including getting three against rival Harvard. He’s another Ivy League player getting NFL looks, and if he can help Princeton with another year of shutting down the run (they averaged a yield of 80 ypg last year), look out. 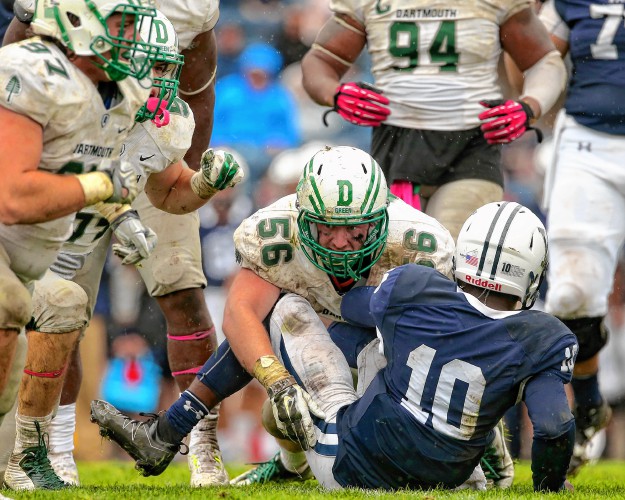 Fearless Prediction: The Big Green seemingly caught the wave of the 2015 season last year to start out, as Dartmouth surfed their way to two tremendous wins against New Hampshire (22-21) and Holy Cross (35-10) to start the year. But then the wheels came off, going 1-7 in Ivy League play and losing five of those games by single digits. Specifically, the offense dried up even as the defense kept them in games. Dartmouth still has a good returning defense, though, and if they rediscover some O, it’s not hard to see them competing for the championship again.

Impact player: LB Eric Meile didn’t get as much national defensive recognition last year as his teammate Flo Orimolade, but all he did was remain a steady, strong tackler with 64 on the season while also recovering two fumbles. With Meile in the middle, and a defense with a surprising number of defenders with game experience under their belts, the Big Green defense seems like it’s still in very good hands.

Fearless Prediction: Exhale, Elis, you did it. For only the second time in a decade, Yale finally beat their most bitter Rival in The Game, 21-14, giving head coach Tony Reno something pleasant to bring into the offseason for a change. That win, however, somewhat masks a maddeningly inconsistent 2016, where Yale went 3-7, gave up more than 40 points on defense four times, and somehow managed to lose to Cornell 27-13 at Schoellkopf Field. The win in The Game will provide hope in New Haven and a good feeling in the offseason, but will it translate into a winning season and an Ivy League title run?

Impact player: RB Deshawn Salter will step in as just today, the expected starter at running back, Alan Lamar, was announced to be out for the season. Beset with injuries, Salter did show flashes of brilliance – in 2015, he had a 233 yard rushing day against Lehigh in a 27-12 victory for the Elis.

Fearless Prediction: Another Ivy League Jekyll/Hyde award candidate has to be given to Brown, who found a way to give Penn the scare of a lifetime as well as three Ivy League victories – but who also lost games to their Rival Rhode Island, Stetson, and the biggest head-scratcher, a season ended egg laid against Columbia. Granted, some of that inconsistency can be attributed to the fact that they are a very young team, and if they cut down on the mistakes and get more consistent, success could follow in 2017.

Impact player: The defender on Brown that every opposing offensive coordinator fears is DE Richard Jarvis, who led the Bears with 18 1/2 tackles for loss including 7 1/2 sacks. The 6’2 speed rusher from Watertown, Mass is a force to be reckoned with on the Brown defensive line.

Fearless Prediction: Are the Lions finally on the cusp of something again under head coach Al Bagnoli? Last year, Columbia was blown out by Princeton and Penn but pretty much made it a game against everyone in the schedule, including a narrow 13-9 defeat against a St. Francis (PA) team that made the FCS Playoffs last year. The cornerstone of that improvement, though, the defense, graduated a bunch of good players. There’s little question Columbia has improved from the doldrums from before Bagnoli arrived – the question is can they build off of that success, and get back to .500 or better?

Impact player: Aside from having one of the best names in all of FCS, DT Lord Hyeamang is a 6’4, 285 lb run-stuffer who had 7 tackles for loss last year and really stood out on a tough, talented Columbia defensive front. (And I’m hoping that the casting agents for Game of Thrones are paying attention, too.)

Fearless Prediction: The Big Red, agonizingly close to a .500 record last season, ended up 4-6 after an excellent 3-0 start in 2016. Especially frustrating was the fact that Chris Archer’s squad had four more home games after that great start – and lost all four, including some winnable games against Sacred Heart and Dartmouth. Returning only four offensive starters, it remains to be seen whether .500 is in reach this season for Cornell.

Impact player: Of course, helping the Big Red is the fact that multifacted RB Chris Walker returns on offense, a dynamic runner and receiver who had 655 yards rushing, 193 yards receiving, and 4 touchdowns last season, including three 100 yard rushing days. If he can shoulder a big load on offense, it’s possible the Big Red can surge again early and build on that going into Ivy League play.