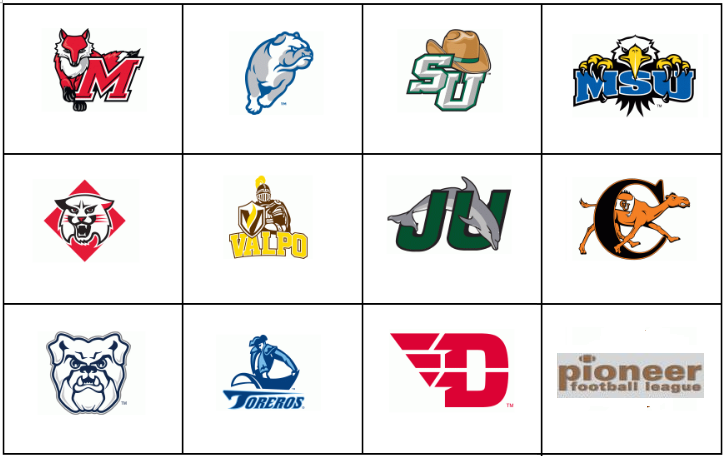 Fearless Prediction: The Flyers have a current seven game winning streak and finished just behind San Diego last year in posting a 9-2 overall mark. Dayton hopes to get back to the playoffs after being the first PFL team to host a playoff game in 2015. The Flyers return 11 starters on from both sides of the ball but they have to replace three starters on both the offensive and defensive lines. Senior quarterback Alex Jeske, who accounted for 15 touchdowns will again lead the offense.

Impact player: CB Christian Searles tied for second in the PFL in interceptions (5) and was third in passes defended (16) a year ago. The two-time First Team All-PFL cornerback was in on 36 tackles, with 25 of the solo variety. The now-senior recorded three interceptions at Jacksonville last year that tied the Flyer single-game record.

Fearless Prediction: San Diego won the first ever PFL playoff game over Cal Poly last year before falling in the second round to North Dakota State. USD should battle for the PFL crown again this year and should be very tough to beat at home having won 27 straight PFL games at Torero Stadium. The Toreros have seven of its 12 returning starters to earn All-PFL honors in 2016.

Fearless Prediction: The Red Foxes’ return a veteran group that includes seven All-PFL performers back that stared off 4-0 within PFL play, but finished just 1-3 in the second half of the season. The team returns 15 returning starters (eight on offense) in hoping to finish the season a better fashion. On offense, quarterback Mike White set the program’s single-season passing yards record last year.

Impact player: WR Juston Christian was White’s top target last year. He had 48 receptions for 992 yards, averaging 20.7 yards per catch, and eight touchdowns. He had a season high 217 yards and three touchdowns at Morehead State.

Fearless Prediction: The Bulldogs ending the 2016 season on a four-game winning streak to go 7-4 and finish third in the PFL standings. The strength of the team will be returning four starters each on the offensive and defensive line. Quarterback Grant Kraemer will settle behind that experienced offensive line after a 23-touchdown campaign that was third among PFL quarterbacks last fall.

Impact player: DE Mack Marrin earned 2016 Preseason All-PFL honors but battled through an injury most of last season but still earned all-PFL honors. The now-senior recorded 17 tackles including 11 solo and 0.5 for a loss in 2016. In 2015, Marrin posted a league-best 8.5 sacks among 12.5 tackles for a loss and earned first-team All-PFL honors.

Fearless Prediction: The Dolphins finished fifth in the PFL standings in Coach Ian Shields’ first season in northern Florida. JU finished 5-5 overall in what was supposed to be a rebuilding year with the new coach. The offense should be a strength as it returns all but one starter, while the defense will need to replace five starters.

Impact player: QB Rylan Wells finished the 2016 campaign as the PFL’s second leading rusher among quarterbacks with 614 yards and was fifth in total offense. The senior was 104-186 through the air for 1,744 yards with 11 passing touchdowns and seven interceptions. The yardage both rushing and passing led the team in both statistical categories.

Impact player: LB Drew Snouffer accumulated 102 tackles as a sophomore last year. He also made two interceptions and two fumble recoveries. He led the Crusaders and ranked fourth in the PFL with 9.3 tackles per game and was one of only four players in the league to reach the 100-tackle mark.

Fearless Prediction: Butler returns both its leading rusher and leading receiver from last season’s squad. Overall, Butler just 4-7—the same record as 2015. The Bulldogs hope to return to the playoffs as Butler was the first PFL playoff team ever in 2013. The Bulldogs return five starters on offense and six on defense.

Fearless Prediction: The Camels enter the 2017 season in its last in the PFL before moving to the Big South Conference in 2018. Campbell finished 5-5 in 2016—the team’s best season since 2011 (6-5)—and second best all-time as a Division I program. The team hopes to ride that wave into an even better 2017 season.

Impact player: WR Aaron Blockmon led the conference in receiving yards a year ago. The redshirt junior became the Camels’ first 1,000 yard receiver with 1,038 yards and 10 touchdowns, both Campbell records. Blockmon surpassed the 100 receiving yards mark six times on the season, hauling in a touchdown in each of his final five games.

Fearless Prediction: Morehead State looked like they might be poised at a title run last year after finishing 2015 with a 7-4 record especially with PFL record setting quarterback Austin Gahafer back for his senior season. Instead, however, the Eagles slumped to a 4-7 mark. With a new quarterback, the Eagles maybe in a rebuilding season this year.

Fearless Prediction: The Hatters started is program in 2013 and has shown flashes but has not shown consistency thus far. Stetson is coming off a 4-7 season but hopes to build with 11 starters returning this year.

Fearless Prediction: Davidson is still seeking answers from its team, which is a terrible 1-31 in PFL games during Coach Paul Nichols’ tenure. Overall, the Wildcats were just 2-9 and were winless within PFL play in 2016. Expect similar results this year for this team.

Impact player: QB Stockton McGuire was named the PFL Freshman Offensive Player of the Year last year and hopes to build on that accolade this year. He threw for 1,230 yards on 93 passes and rushing for 539 yards on 108 carries and was responsible for 12 touchdowns, eight on the ground and four passing.