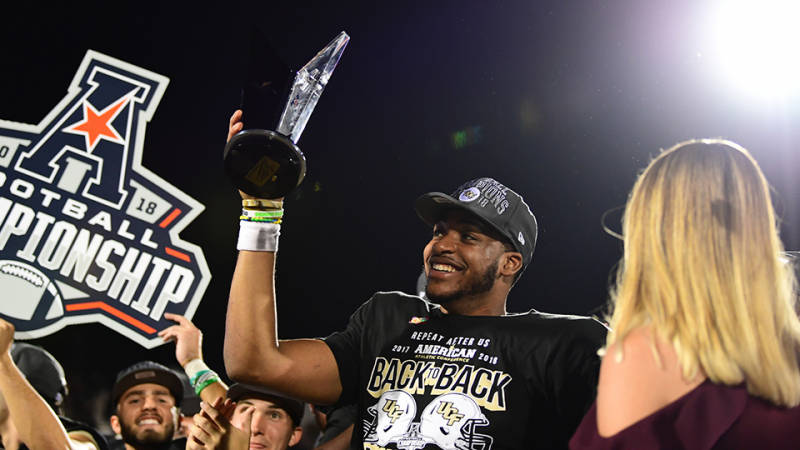 All five Group of Five conference for the first-time hosted championship games with the Sun Belt Conference joining the party this year. Aside from the Sun Belt game, the other four games went down to the final minutes before a winner was decided. I will go over a small recap of each game and provide a link to both a detailed game recap and a video highlight of each game in this article.

The big story in the American Athletic Conference was with UCF, which had to come from behind to defeat Memphis and were playing without All-AAC quarterback Milton McKenzie, stayed undefeated to earn the Group of Five’s best ranking. With the Power Five Conference taking up the latest top six spots and had no upsets in their title games, UCF undoubtedly will have to settle for a New Year’s Six Bowl bid just as the Knights did last year.

Despite coming from behind with back-up quarterback in freshman Darriel Mack Jr. leading the way in a 56-41 victory and being only one of four FBS teams (Alabama, Clemson, and Notre Dame are the others that are ranked 1 through 3 respectively) to go undefeated, the College Football Playoff committee has already put them behind one-loss teams of Georgia, Oklahoma, Ohio State, and a 2-loss Michigan to have a #8 ranking in their latest poll.

With both Oklahoma and Ohio State winning the Big 12 and Big 10 titles and Georgia losing narrowly to top ranked Alabama in the SEC title game, there likely is no way for the Knights to get that fourth spot unfortunately. Despite this, UCF has now won 26 games in a row overall—something only eight other teams in FBS history have been able to accomplish.

The MAC title on Friday had an upset as Northern Illinois defeated Buffalo in Detroit. Husky quarterback Marcus Childers threw a touchdown pass – his fourth of the game – to D.J. Brown with 1:09 to go and Northern Illinois (8-5) rallied from a 19-point, second-half deficit to take a 30-29 victory and the MAC title. NIU’s 2-point conversion failed following the go-ahead touchdown and the Bulls (10-3) reached the Huskies’ 41-yard line before an incomplete pass on fourth down with 21 seconds left ended Buffalo’s hopes.

In an amazing two-year return to the field for the UAB program, the Blazer saw its culmination when the Blazers were crowned Conference USA Champions for the first time ever with a 27-25 victory over Middle Tennessee (8-5) in the Conference USA Championship game. Blazers running back Spencer Brown was named the game’s Most Valuable Player after he rushed 31 times for a season-high 156 yards and a touchdown. Thirty-four of his yards came in the fourth quarter on a 39-yard drive that ended with a UAB (10-3) field goal with 3:32 remaining that proved to be the winning margin in the game.

Running back Ronnie Rivers scored on a 1-yard run in overtime to give Fresno State a 19-16 victory at host Boise State in the snow-filled Mountain West championship game. Fresno State (11-2) won its first conference title since 2013, beating the Broncos (10-3) on their blue turf for the first time in 10 tries. Rivers scored after Boise State’s Haden Hoggarth made a 23-yard field goal on the opening overtime possession. Hoggarth had an extra point attempt blocked by the Bulldogs Matt Boetang with just over eight minutes left in the game, leaving it tied and ultimately what sent the game into extra time.