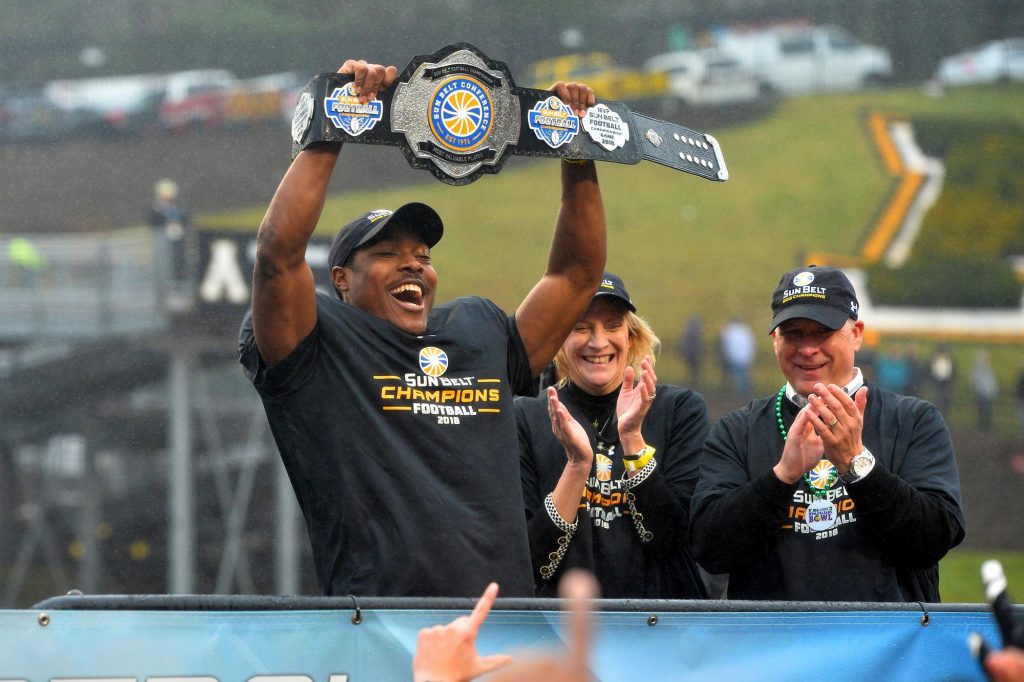 BOONE, N.C. — There was a sense of symmetry for Darrynton Evans on Saturday afternoon as Appalachian State played in the first Sun Belt Conference football championship game against Louisiana-Lafayette before 14,960 fans at a rainy Kidd Brewer Stadium.

“I kind of had a flashback,” said Evans, as he scooped up a bouncing kickoff and dashed upfield. “I really was waiting for the ball to go out of bounds but then it just took a weird bounce and I decided ‘Alright, I’ve got to field it.’ The guys up front did a good job blocking, I saw a hole and I just hit it.”

The Mountaineers were trailing after the first possession of the contest and, just as he had done at Penn State in the season opener, three months earlier, Evans set out to change the game’s momentum. His 97-yard kickoff return set up Marcus Williams for a one-yard touchdown on the next play, giving ASU a lead it would never relinquish in its 30-19 victory over the Ragin’ Cajuns.

Evans had scored on a 100-yard kickoff return to electrify his team at Penn State in an impressive, though eventual 45-38 overtime loss to the Nittany Lions.

On a day where the Mountaineer offense struggled to one of its worst performances of the season, Evans was the catalyst Appalachian needed. The 5-foot-11, 191-pound sophomore speedster piled up 218 all-purpose yards, including 111 yards rushing on only 11 carries to help ASU to the win and earned most valuable player honors for the contest.

Only becoming a starter at tailback after Sun Belt preseason conference offensive player of the year Jalin Moore broke his ankle in the fifth game of the season, Evans went over the 1,000-yard mark for the year on Saturday.

The victory clinched a berth in the New Orleans Bowl on Dec. 15 at 9 p.m. at the Superdome for the Mountaineers as the champions of the Sun Belt against a Conference USA team to be announced on Sunday. It will be the fourth consecutive bowl appearance for App State in four years of eligibility in the Football Bowl Subdivision.

It was the third straight year that ASU had earned a share of the Sun Belt title.

“It’s an unbelievable day for us and our program,” ASU coach Scott Satterfield said. “I’m extremely proud of these players and our seniors in particular in the way that they’ve led our football team this year. We faced adversity just like any other good football team does throughout a season, but these guys just continued to rally each and every week.”

Appalachian quarterback Zac Thomas struggled in the passing game, completing just 6-of-13 passes for 75 yards, but he burned ULL with his legs for 59 yards on nine attempts and two touchdowns. His 25-yard keeper late in the second period gave the Mountaineers a 14-6 edge at the intermission and his 35-yard scamper early in the fourth stanza extended the lead to 27-16.

“I thought I could beat the guy that was covering the tight end,” Thomas said. “So, I pulled it and ran and in my head, I was thinking to myself that I wasn’t gonna get tackled. I was gonna get in that end zone.”

On defense, App State used big plays and a bend-but-don’t-break attitude to further turn the tide. The Mountaineers held the Cajuns to four field goals after defensive stops deep in ASU territory.

No defensive play was more important than Tae Hayes’ interception and 32-yard return in the fourth quarter to set up the second Thomas touchdown. Linebacker Anthony Flory (game-high 11 tackles) hit ULL quarterback Andre Nunez (10-of-21 for 85 yards and two interceptions passing) on a nicely-timed, delayed blitz just as Nunez released the ball into double coverage.

“I can’t even take the credit for it,” Hayes said. “Coach Brown made a good call. He knew what [Louisiana] was about to do. It was my job to go out and execute it.”

Chandler Staton continued his clutch play since taking over kicking duties for the Mountaineers in the middle of last season, drilling three 42-yard, three-pointers on the soggy day.

“It was not pretty at times today,” Satterfield said. “Hats off to Louisiana and the way they played. They are coached well and have gotten better throughout the season. They are a tough team to play. Our guys kept fighting and we knew that it was going to be a 60-minute game. We pulled it off there in the end.”