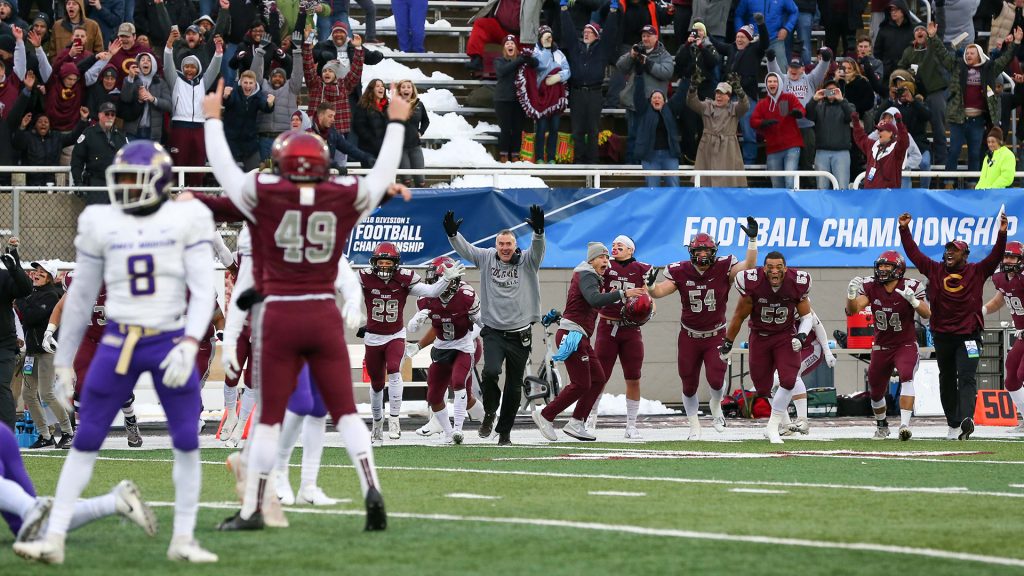 HAMILTON, NY.– It was an instant classic of an FCS Playoff game in Hamilton, New York this afternoon as kicker Chris Puzzi nailed a 38 yard field goal as time expired to lift his Colgate Raiders to a 23-20 win over James Madison.

“We knew that this was going to be a low-scoring game,” Colgate head coach Dan Hunt said afterwards. “It’s not always pretty, it might not make great television all the time, but if you can run the ball and play great defense, you’re in any game.”

Running the ball and playing great defense was indeed the name of this playoff game, where JMU started the game with a grinding, precise 6 play, 57 yard drive to go up 7-0 early.

From there Colgate QB Grant Breneman and the Colgate offense slowly ground and chipped away at the Dukes’ lead, cutting the deficit to 10-6 and eventually tying the game 13-13 after Breneman tucked the ball and ran 32 yards for a touchdown.

Check out the touchdown from Breneman‼️ We are all tied up at none other than 1⃣3⃣#gogate #GATA pic.twitter.com/eo8rVYsanV

“We haven’t had many opportunities like that, where teams have actually came at us right away and put it in the end zone,” Colgate LB T.J. Holl said. “So it was more about keeping our composure, knowing that eventually teams will get breaks and teams will make plays cause it’s a high level of football right here. So as long as we kept our composure like we did, we came back out, kept fighting, kept scratching, and kept clawing.”

The Colgate defense, meanwhile, forced five interceptions, two of which were nabbed by Tyler Castillo.

“Just got to give it up to the defensive staff for preparing us hard all week and making sure we knew what we were getting ourselves into,” he said afterwards. I also have to give credit to T.J. and the defensive line, basically the front seven, constantly getting pressured, yet forcing James Madison into tough situations.”

Holl and the defense technically only sacked JMU QB Ben DiNucci once, but did pressure him all afternoon and prevented the Dukes from connecting on many big plays. James Madison’s longest play from scrimmage was a 33 yard run by DiNucci, and they kept their chunks of yardage short.

But most of the game James Madison, too, was up to the challenge of containing the Colgate offense. Colgate only averaged 3.1 yards per carry and was stopped, with the Dukes down 20-13, on a crucial 4th and 1 from the JMU 10 to have Colgate turn the ball over on downs. Eventually the JMU offense would turn that into a DiNucci touchdown run to tie the game at 20.

“I’m really proud of our players,” head coach Mike Houston said. “We started off really hot and got the lead. We lost the momentum there in the third quarter, really had our backs to the wall and it didn’t look good. We stuck together and got the momentum back. D’Angelo Amos had a great punt return that was a spark. Our offensive line really gave us some fire there and got us back in the ball game for a chance to win. We had a chance to win it.”

JMU had to deal with the distraction of the possibility of Houston leaving for Charlotte in news that broke Wednesday. Charlotte subsequently pulled it offer Friday when Houston said he wanted to also consider other options. He is considered a candidate for the East Carolina job.

Cardon Johnson ended his JMU career with 66 yards and a touchdown in his final game as a Duke.

But in a game that would be tight throughout, the final twist seemed to come on a fake punt try that was sniffed out by the Colgate defense with 2:46 left in the game. The failed fake was the first of JMU punter Harry O’Kelly’s career.

“I give credit to the players – the punt return team just did a great job,” Hunt said. “They did what they were coached to do. They were ready. That’s how we play.”

Then Breneman on offense led Colgate on a 7 play, 40 yard drive to set up the game-winner with seconds left to play. Like they had all game, WR Owen Rockett had a huge reception (he ended the day with 5 catches for 101 yards and a touchdown), and RB James Holland, who was a freshman when Colgate upset James Madision in the 2015 playoffs in Harrisonburg, got some tough yards to make an extremely difficult field goal attempt into a makeable one.

It all set up Puzzi’s incredible booming kick as the final seconds ticked off the clock.

Colgate survives and advances to next week, where they will take on North Dakota State in the Fargodome. Kickoff is set for noon Eastern time on Saturday, December 8th and will be broadcast on ESPN.