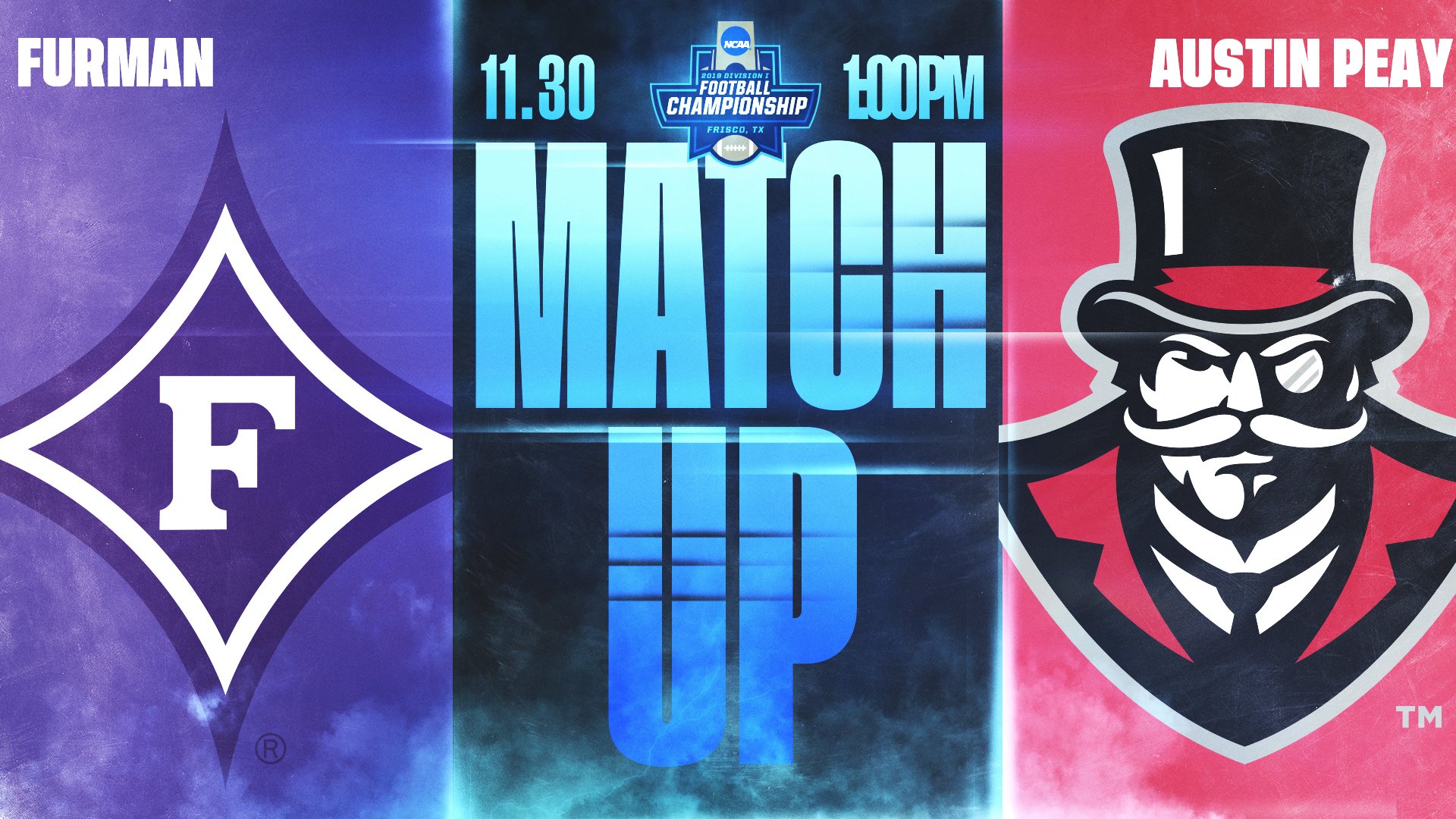 When Mark Hudspeth was named the 20th coach in Austin Peay history nearly one year ago, the expectations were not all that lofty for the Governors.

A winning season would be alright and a good start. An Ohio Valley Conference championship? Well, let’s not get ahead of ourselves. An FCS playoff berth? In time.

The time has arrived in a hurry in Clarksville.

Austin Peay, the winners of the OVC for the first time since 1977, plays Furman in the first round of the FCS playoffs. It is the first playoff appearance in the history of Austin Peay. The winner of Saturday’s game will move on to face No. 4-seed Sacramento State in the second round of the playoffs next weekend.

2019 Season: A season of ups and downs has many people still wondering about Furman.

A narrow (24-17) loss to FBS Virginia Tech early in the season caught the eye of many followers. Losses to The Citadel (27-10) and Wofford (24-7) likely cost the Paladins a top-eight seed in the playoffs.

After the loss to the Hokies, the Paladins won three in a row to move to 5-2 on the season before falling to the Keydets. The loss to Wofford later snapped another three-game losing streak by Furman. The season ended with a 64-7 thrashing of NAIA Point.

Austin Peay, meanwhile, needed time to adjust under a new coach. A 2-2 start to the season was indicative of a new regime being in town. But it all came together rather quickly.

The Governors defeated perennial conference power Jacksonville State in the first conference game of the season and followed that up with a 28-24 win over Southeast Missouri. Suddenly the Govs had a lethal combination of momentum and confidence. With those two things anything can happen.

AP rebounded from a midseason stumble against Tennessee State to win the final five games of the regular season to secure its spot in the playoffs.

Common Opponents: The Paladins and Governors faced two common opponents this season. Furman defeated Mercer 45-10 on Sept. 21 and then defeated East Tennessee 17-10 the following week. Both of those games were played in Greenville.

Austin Peay split its games against those two same foes. The Govs had little trouble in defeating Mercer 48-34 on Sept. 14 in Macon but, came up short the following weekend when East Tennessee scored a 20-14 win in Clarksville.

Coaches: Clay Hendrix returned to take over the Furman program after a long tenure as an assistant at the Air Force Academy. And the success continues to pile up since his arrival prior to the start of the 2017 season.

The Paladins posted eight wins in his first season at his alma mater before finishing the 2018 season with six wins and a share of the Southern Conference title.

Hendrix, was a standout offensive guard during his playing career (1982-85) at Furman and later returned to the school as an assistant for 19 seasons (1988-2006). He was on the staff when the Paladins won the 1988 1-AA national title. He became an assistant at N.C. State in 1986 following his graduation from Furman and spent two seasons there before returning to Furman.

Hendrix has a career head coaching record of 22-13 heading into Saturday’s contest against the Governors.

Mark Hudspeth has exceeded all expectations in his first season as coach at Austin Peay.

Hudspeth spent seven seasons as coach at Louisiana (2011-17) before returning to Mississippi State, where he previously served as an assistant (2009-10), prior to taking over the Governor’s program. During his time with the Ragin’ Cajuns he led them to five appearances in the New Orleans Bowl.

Hudspeth also coached North Alabama to a 66-21 record in his seven seasons (2002-08) with the Lions, who advanced to the NCAA Division II playoffs five times with Hudspeth at the helm.

Furman has shown the potential for the big play, but the Paladins prefer to focus on simply doing the little things over and over again and wearing the opposition down.

That approach has proven to work.

Furman has picked up most of its yards by way of the rush this season. The Paladins are averaging 275.8 yards per game rushing this season, while tallying just 149.8 yards through the air. Despite that difference, Furman has proven to have big-strike capability at any time.

Key players: Darren Grainger (6-4, 195), a redshirt freshman, operates the Furman offense with nice efficiency. Has completed 76 of 154 passes for 1,203 yards and 13 touchdowns. He has been intercepted just three times this season. He has added 296 rushing yards on 88 carries and another five touchdowns.

Devin Wynn (6-0, 203) is the team’s leading rusher after finishing the regular season with 1,121 yards on 165 carries (6.8 ypc) and 14 touchdowns. The rushing productions falls after that, but there is a silver lining that may prove to be beneficial against the Governors.

What could help in Saturday’s game is the depth the Paladins have in the backfield. A total of 14 different players have carried the ball this season and if Wynn or Abrams or Watkins struggles in the early going against AP, there are other players who the Paladins can look to in the hope of finding a spark. The Paladins have four touchdown runs of at least 50 yards this season.

Thomas Gordon (6-0, 178) is the leading pass catcher for Furman. He has caught 47 passes for 752 yards and five touchdowns this season. Furman can also go deep to score. The Paladins have two passes that have covered at least 50 yards this season.

The Paladins also have an active secondary as four different players have each intercepted two passes this season to lead Furman in that department.

A short time after Austin Peay was announced as part of this year’s playoff field, coach Mark Hudspeth talked of establishing a culture at the school.

Nothing helps culture more than winning … and the Govs have a chance to add to the winning of 2019 with the first playoff win in school history.

AP has all the tools in place to help the Governors in taking that next step.

Key players: JaVaughn Craig (6-0, 200), a redshirt senior, has accounted for more than 3,000 yards of total offense this season for the OVC co-champions. He has thrown for 2,567 yards after completing 180 of his 318 pass attempts. He has 22 touchdowns to his credit and has been intercepted just 10 times this season. One of the top dual threats in the nation, Craig has added 547 rushing yards on 105 carries (5.2 ypc) and eight additional scores for the Governors.

The AP defense is led by a trio of standouts in linebacker Jack McDonald, defensive back Juantarius Bryant and Pat Walker, another linebacker. McDonald (6-0, 210) leads the team in tackles with 94 (47 solo), while Bryant (5-10, 205) had 89 (52 solo) tackles on the season. McDonald also leads the Govs with 8.5 TFLs on the season and has three pass breakups and one interception. Walker (5-10, 210), also has four breakups and has accounted for 80 tackles (34 solo) this season heading into Saturday’s contest.

Prediction: The immovable object versus the irresistible force.

That might be the best way to sum up what figures to transpire when Furman and Austin Peay take to the field to determine which team remains alive in the hunt for a national championship in 2019.

Furman has proven to prefer running the football and has had plenty of success at doing that this season. The Palidans average 275.8 yards per game on the ground in 2019.

Stopping the run is something Austin Peay does better than most teams in the nation. The Govs’ opponents are managing just 86.5 yards on the ground.

Something has to give.