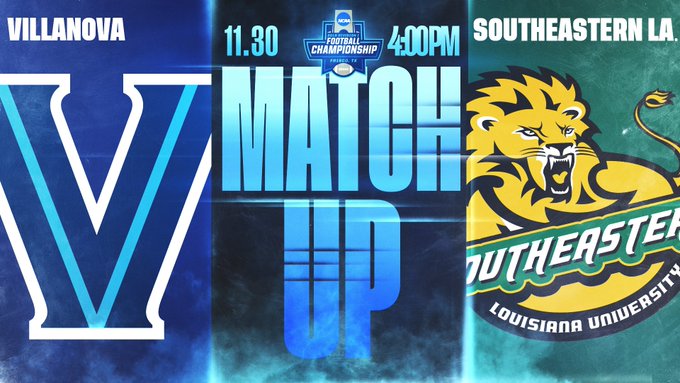 Villanova started their season with a fury, making easy work of three Patriot league teams in the non conference schedule – Colgate, Lehigh, and Bucknell – to the tune of an average victory of 39-10. With a soft schedule, many wanted to see how Villanova would handle the tough CAA. The Wildcats started CAA play with another three wins over Towson, Maine and William & Mary. The offensive output remained similar to their opening three weeks, but they allowed quite a few more points. Then the Wildcats hit some adversity. After hanging with #2 James Madison for three quarters, Villanova turned the ball over on four of its last five possessions, turning a close game into a 14 point loss. The Wildcats then lost two more games before they would right the ship and finish the season with three straight wins. On the season, Villanova averages 36.8 points per game and allows 24.5. They feature a fairly balanced offense that averages over 450 yards per game. Having lost Justin Covington, their lead back, mid-season sent the Wildcats in to a scramble in the run game. Dee Wil Barley has stepped up in Covington’s absence to be the lead back. Are the Wildcats just a streaky team? Can they continue their hot streak into the playoffs? A matchup with a strong Southeastern Louisiana Lions team will certainly test Villanova on both sides of the ball.

Key Player: QB Daniel Smith transferred to Villanova from Campbell for his senior season. Smith has been one of the top players in the CAA this year with 2991 yards passing, 31 touchdowns and ten interceptions. Smith also ran the ball 77 times for 367 yards and 11 more touchdowns. Smiths passing touchdowns rank him tied for sixth in the country and his rushing touchdowns rank 31st. A strong game from Daniel Smith could be what the Wildcats need to move on to the next round.

Southeastern Louisiana picked up what the FCS would thought would be a huge upset win in week one against a preseason top ten team, Jacksonville State. While that win didn’t wind up being as big as thought, it propelled the Lions to a strong season where they went 7-4 and were one play away from being the Southland Conference champion. Against FBS Ole Miss, the Lions showed a strong game plan hanging with the SEC foe, only losing by 11 points at the end after entering the fourth quarter down five. The one thing that almost hurt the Lions was their cancelled game against Bethune-Cookman due to weather. In the conference schedule, Southeastern Louisiana went 6-3. Their biggest win was a 34-0 drubbing over playoff eight seed Central Arkansas. A two game losing streak mid season to McNeese State and Incarnate word put the Lions on the bubble, but they went into the last game of the season against Nicholls with a chance to win the conference title. In a back and forth game, it looked like SLU was going to either punch in a game winning touchdown or run the clock down for a game winning field goal, but they fumbled at the two and it was recovered by Nicholls. Instead of watching the selection show calmly as conference champs, the Lions had to sweat it out as a bubble team. Similar to their opponent, Villanova, SLU averages 36.6 points per game and allows 24 per game.

Key Player: QB Chason Virgil had an excellent senior season under center for Southeastern Louisiana. On the season, Virgil has thrown for 2881 yards with 18 touchdowns and 10 interceptions. The interception number looks bad until you look deeper and see that 7 of the 10 interceptions came in two games – losses to Ole Miss and Incarnate word. Southeastern and Villanova may wind up having to match score for score, so Virgil will be key in keeping the Lion offense moving.

Fearless prediction: The committee got this matchup right. This should be an excellent game with a chance for multiple lead changes. Villanova looks to be just a bit better overall and will move on to face Montana in the second round. Villanova 34, Southeastern Louisiana 31