The FCS playoffs are finally here! Enjoy the picks of the staff of the College Sports Journal and find out who we think will win the FCS National Championship.

Check out what CSJ thought of the FCS Playoff bracket here. 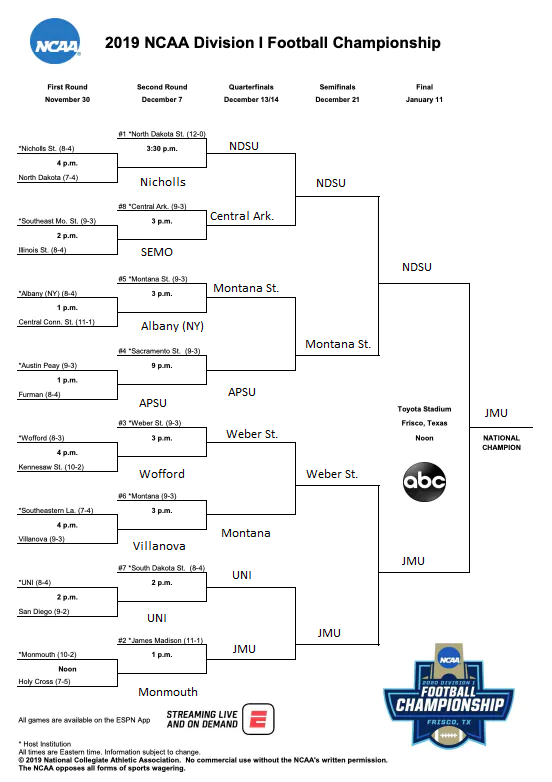 Easiest Path To Frisco: It’s awfully hard to judge when both James Madison and North Dakota State have seemed at a different level than the rest of FCS all season, but when you see the Bison side of the bracket avoiding Villanova, UNI and Weber State, it’s clear that North Dakota State’s bracket is much easier than James Madison.

Hardest Path to Frisco: No question to me that Villanova, whom I thought should have been seeded, was hosed. Not only do they have to fly to Louisiana for a first-round game, should they win they would need to fly across the US again to Montana, and if they win that they could have to fly across the US a third time to face Weber State. The Wildcats have the toughest ask of anyone else in the bracket, and the Wildcats deserve a better and less expensive fate. 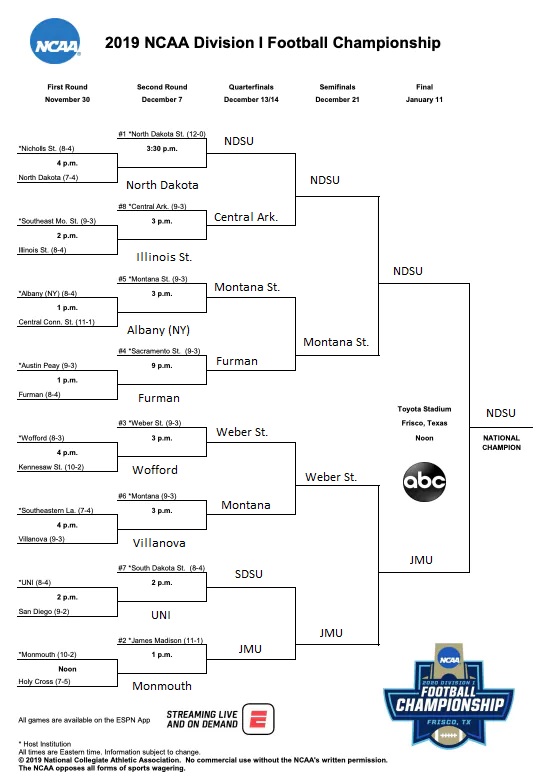 Easiest Path To Frisco: I feel top seeded North Dakota State has the easiest path to the national title game with potential rematch of in-state rival North Dakota or the Southland’s Nicholls in the second round, a match-up with the Southland’s Central Arkansas in the quarterfinals, and either Big Sky foe Sacramento State or Montana State in the semifinals. North Dakota and Montana State have been to the Fargodome before but it is like a different atmosphere come playoff time with the amped-up fans.

Hardest Path to Frisco: Of the seeded teams, the hardest path I feel is South Dakota State. The Jackrabbits have made the semifinal round the last two years but to do that again, SDSU will most likely have to get by MVFC foe UNI in the second round and then go east to James Madison in the quaterfinals, and then travel west to either Weber State or Montana in the semifinals. Not easy for what was the third ranked team most of the season. 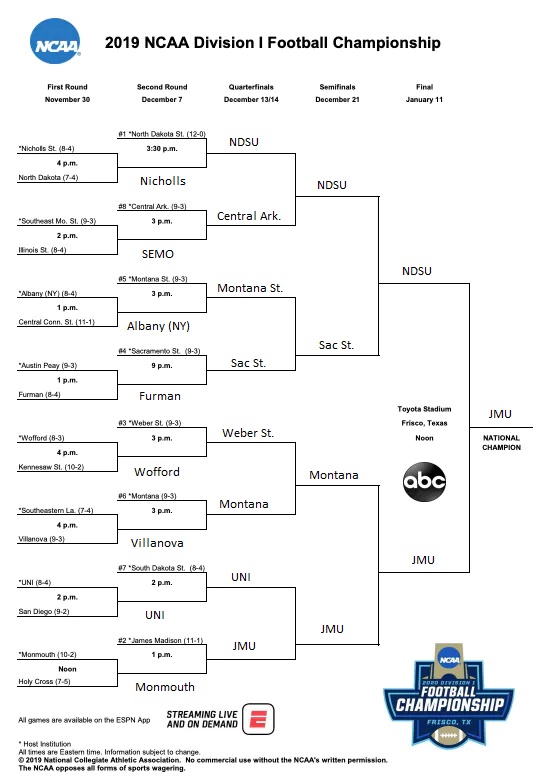 Easiest Path To Frisco: It’s probably North Dakota State, but they are the #1 team, so they should have some advantages. They wont have any problem with Nicholls or North Dakota. Central Arkansas likes to win with the pass, and North Dakota State is the best team in the country against the pass – that shoudl be an easy win for the Bison. In the semifinals, they would most likely see either Sacramento State or Montana State. Montana State’s run game would give the Bison a run, but look for the Bison to take their yearly trip south to Texas.

Hardest Path to Frisco: Anyone not named North Dakota State or James Madison. Sure, it’s a cop out, but the top two teams seem to be on a Texas collision course in January. As for a team with a tough draw, look at Villanova. The Wildcats had a legit claim to a seed. But they wound up being sent to Louisiana for the first round. What do they get for a win there? A trip to Montana against one of the best home field advantages in all of college football, especially in December. Eek that one out? Yep, probably another flight back west again to Ogden, UT in the elevation against Weber State. Semifinals? Well, they would stay on the east coast. But, it would probably mean a trip to Bridgeforth Stadium against James Madison, a place the Dukes have lost one game over the last four years. 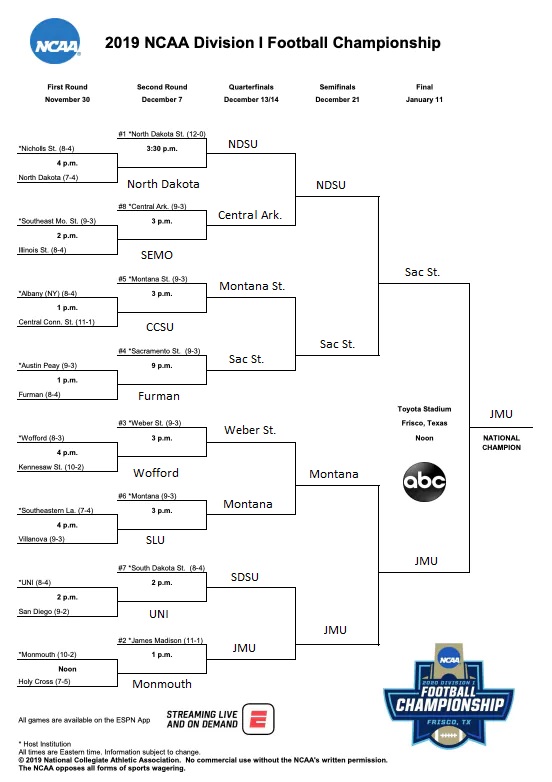 Easiest Path To Frisco: The easiest side of the bracket would be NDSU’s quadrant. I’m not picking that solely based on the perennial champs in the bracket, but no one in that bracket will provide a sufficient challenge outside of Central Arkansas. The other four teams are missing at least one of the following, if not all three qualities needed to be a good playoff team: healthy team, good defense, able to make explosive plays on offense. I think NDSU will have a brief scare with Central Arkansas and continue walking unscathed – until Sacramento State heads to the Fargodome.

Hardest Path to Frisco: I think the hardest quadrant to make it out of will be the Montana/Weber State section. With two triple option teams squaring off in the first round and two wild cards in SLU and Villanova, these second round games could be intriguing. Also, I think the winner of this quadrant could be the most worn out after doing so. Each quadrant will have their issues, but I think player health and not playing too aggressive will be most needed here. 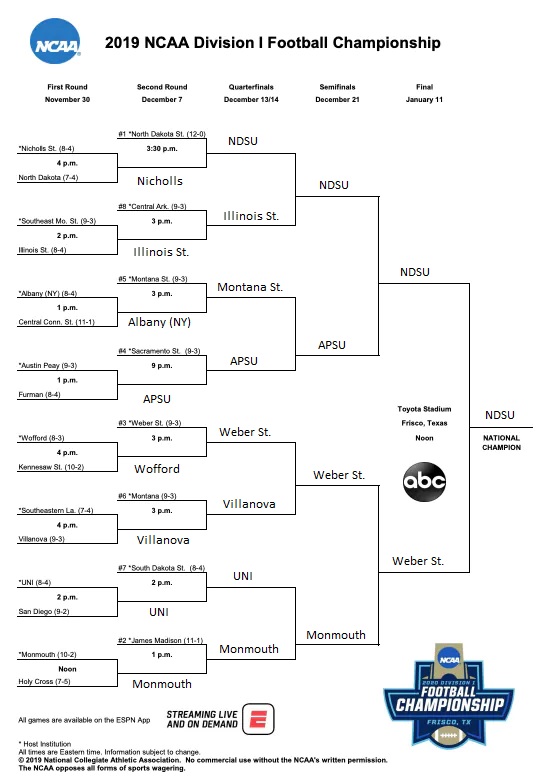 Easiest Path To Frisco: North Dakota State has proven time and time again the easiest path to Frisco is Interstate 29 to Interstate 35 and then then continue south into the suburban areas of north Dallas, which NDSU fans have filled on a regular basis over the course of the last eight years. I just don’t see anyone being able to defeat the Bison, especially at home in the Fargodome. Trying to do so will leave them Thunderstruck.

Hardest Path to Frisco: After the first round, I think the bottom bracket becomes a sort of “pick ‘em.” Weber State and Montana should have little trouble with their second-round opponents, but South Dakota State and James Madison could be challenged as Northern Iowa and Monmouth are both able to put points on the board, which should make for two games that have the greatest chance at an upset.