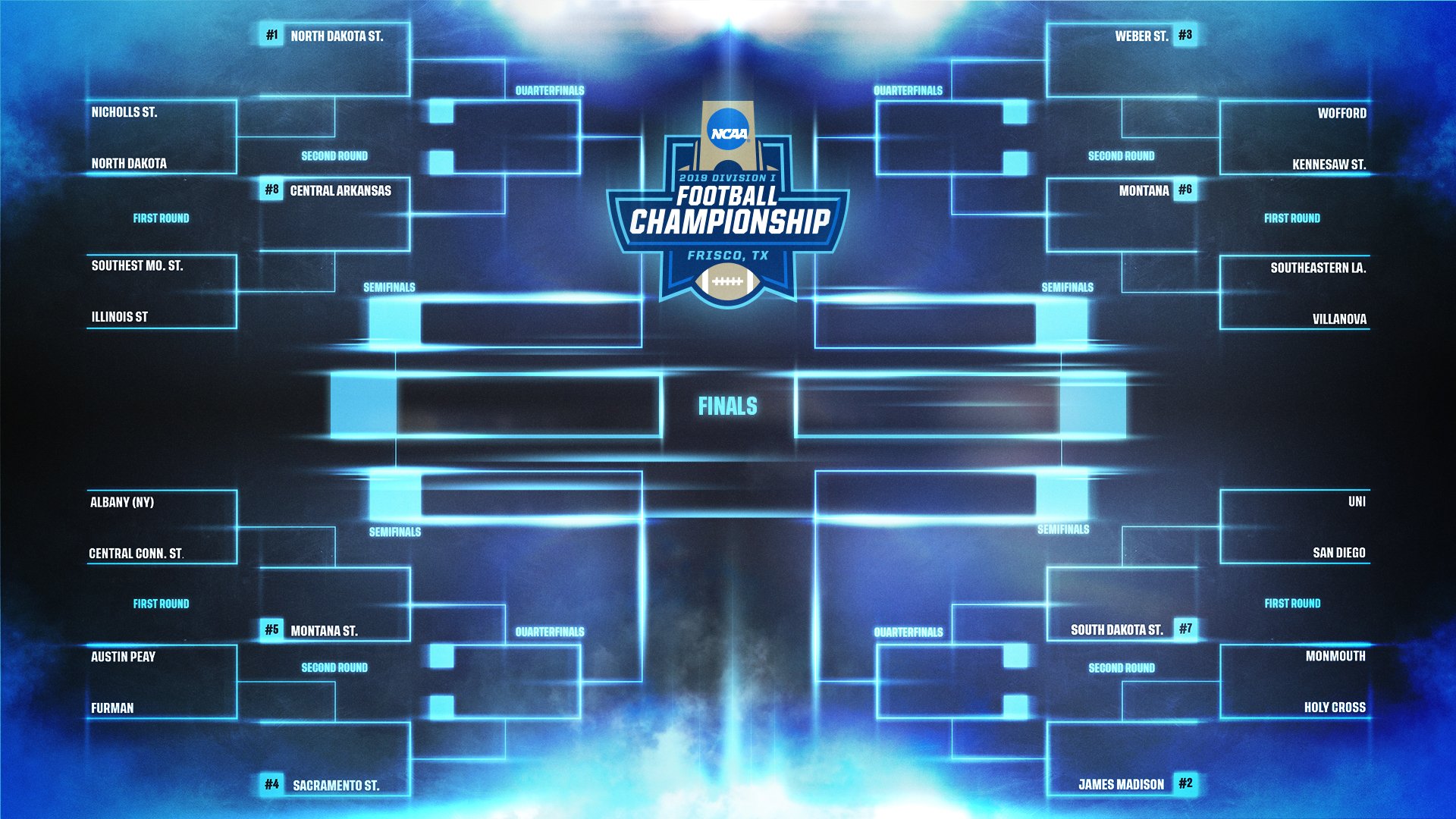 The bracket for the FCS playoffs was revealed this weekend.

Two-time defending national champion North Dakota State (12-0) tops the bracket as the number one seed after winning the Missouri Valley Football Conference. The Bison are making their 10th consecutive and 15th overall appearance in the championship.

James Madison (11-1) is the number two seed after earning the automatic qualifying berth from the Colonial Athletic Association. The Dukes are making their sixth straight and 16th overall appearance in the championship.

Weber State University (9-3) is the number three seed after winning a share of their third-straight Big Sky Conference title and the conference’s automatic qualification. The Wildcats will make their fourth consecutive appearance in the championship and eighth overall.

Sacramento State (9-3) is the number four seed after earning a share of the conference title in the Big Sky. The title was the first for the Hornets, who are making their inaugural appearance in the championship field. 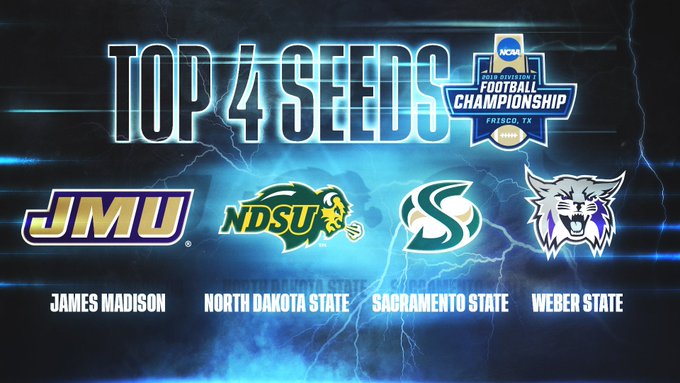 Montana State (9-3) is be the fifth seed. The Bobcats are making their second straight and 10th appearance overall in the championship.

Montana (9-3) is amongst the field for the 24th time overall. The Grizzlies are making their first appearance since 2015 and will be the sixth seed.

South Dakota State (8-4) captured the seventh seed and will make their eighth consecutive appearance and ninth total in the championship.

The eighth and final seeded team is Central Arkansas (9-3). The Bears earned a share of the Southland title and will compete in the championship for the fifth time in the last nine years.

During the previous 42 years of the championship, 21 schools have won a national title, six of which earned a place in this year’s bracket.

The first round matchups to be played over the weekend of 11/30/2019 were also announced. All first-round games are available via ESPN3 via the ESPN App (subscription required). Start times are staggered out so that it will be possible to catch FCS Playoff action from noon Eastern Standard time to the early evening without interruptions. 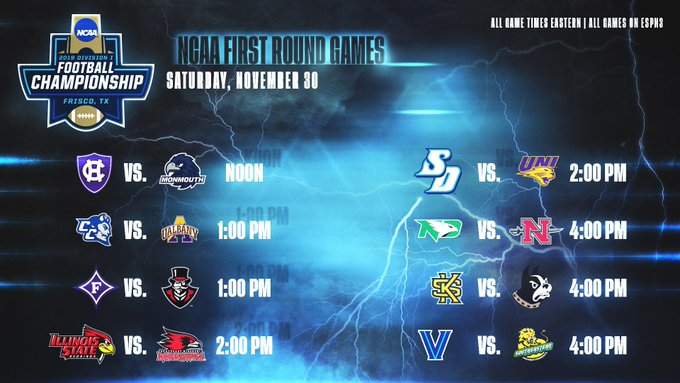 Overall Impressions Of The Bracket

Chuck Burton: My critique of the bracket does not so much come from who is in and out (there are always going to be quibbles on the last teams in/first teams out) but for the travel involved for some of the teams. Three of the first round games include really long flights (Villanova/Southeastern Louisiana, North Dakota/Nicholls, and San Diego/UNI) and Furman/Austin Peay is another flight game. Additionally, unless North Dakota upsets Nicholls and SEMO beats Illinois State, six of the second round games will include flights as well.

This season’s FCS playoffs seem destined to be a major travel headache for all schools – and it was a direct consequence of seeding four Big Sky teams. Had 9-3 Montana simply hosted a first round game and 9-3 Villanova or 10-2 Monmouth been a seeded team, the logistics would have been eased immensely, especially in the second round.

As a result, the NCAA can expect badly attended games, as opposing fans will have trouble getting Thanksgiving flights. If the NCAA were willing to pay for all of these schools’ travel that wouldn’t be a problem, but that’s not the case. There will be enormous pressure on the first and second round host schools financially as a result of how the committee has structured this tournament.

Kent Schmidt: I felt the committee did a reasonable job of moving teams around and not having the typical conference match-ups set for the second round. It also did well with the Top 4 seeds as I felt North Dakota State, James Madison, Weber State, and Sacramento State had the best resumes to end the regular season. But having four teams (half the seeded teams) from one conference in the Big Sky was the head scratcher for me especially after Montana’s blowout loss in the last weekend against Montana State. I do like that two Missouri Valley teams seeded but it might have been the wrong second team as Northern Iowa (despite losing to the team that was seeded in South Dakota State) had the nod as it finished second in the league.

Jamie Williams: Overall, the committee did a fairly nice job of assembling a bracket. My biggest issue was them giving a seed to South Dakota State. The Jackrabbits lost 3 of their last five games. To me, thats not a team that should be rewarded with a seed. Villanova, Wofford or even Monmouth should have been seeded before the Jacks. But the committee cleared relied on the Simple Rating System for their top eight. I think the committee did a nice job of putting together some solid first round match ups with teams that have similar styles; and were able to do so moderately regionally. I look for Villanova/Southeastern Louisiana, Wofford/Kennesaw and Austin Peay/Furman to all be excellent games that are not decided until late. A Montana/Weber quarterfinal match is also something to potentially look forward to. I give the committee a solid B+ for their work on the bracket.

Ben Schleiger: I think the committee did a good job at choosing which teams got in this year. I do not think there were any obvious snubs of teams who deserved it more. The only real problem with the bracket is South Dakota State being given a seed after a terrible loss at rival South Dakota with only a third string quarterback healthy enough to lead them. I think Monmouth was deserving of one of the last two seeds since SDSU looks in such bad shape with four losses.

Preston Adams: I thought the committee did a great job with the overall bracket. SDSU getting a seed seems to be more of a nod to the perceived strength of the MVFC than anything else. Losing their last game to a below .500 team, albeit a rival, and two other FCS losses was a head scratcher, but nothing to be uproarious about.

Ray Maloney: Bracketing is always nothing short of challenging, to say the least, as a number of factors are to be considered.

Seeding should not be as difficult. The top two seeds were virtual looks since as far back as the start of fall camps. And, as in any season, some teams are going to rise up while others fall by the wayside.

If a conference was deserving of three seeded teams, it was not the Big Sky Conference. North Dakota might have benefited the most in that though after playing the season mostly against its former conference.

Another thing that jumped out is that while the NCAA has normally tried to make the first round somewhat geographical in nature, sending Villanova to Louisiana and San Diego to Iowa, along with North Dakota to play at Nicholls State, seems to make little sense. 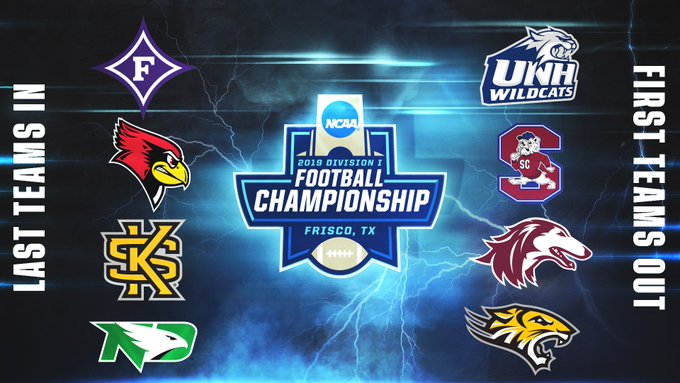 Who Was Left Out That Should Have Made It?

Chuck: No question I thought South Carolina State should have made it in. I felt one of the criteria used, “Wins against autobid conferences”, really fatally harmed the Bulldogs’ chances more than their D-II loss. The MEAC is not an “autobid conference”, so their win against Bethune-Cookman and close losses against FCS Top 25 teams Florida A&M and North Carolina A&T seemed to not get the respect they deserved. I didn’t feel North Dakota deserved to be in – who didn’t just lose to Idaho State, but got crushed by 5 touchdowns. If you consider North Dakota with one “quality win” over Montana State and South Carolina State with one “quality win” over Wofford, if you look at the Hawks’ and Bulldogs’ schedules, to me it’s no contest – South Carolina State was more deserving.

Kent: Southern Illinois was the biggest omission I felt as it played a full DI schedule and defeated an FBS team in UMass. They also played top seeded NDSU close in the last week and won their prior four games. I felt the Salukis’ resume was better than Southeast Louisiana, as well as North Dakota.

Jamie: I actually think the committee got the right 24 teams. North Dakota was probably the last team in the field. I don’t see a team on the outside that I would put in over them. I see potential arguments for Southern Illinois and South Carolina State, but not enough of an argument to have them bump UND who actually defeated a seeded team despite their awful loss to Idaho State.

Ben: There is only one substitution I could even think to bring up and that would be SC State getting in instead of Kennesaw State. SC State won a better game (vs. Wofford) and had better losses (South Florida, FAMU, NC A&T) of one FBS team and two Top 25 ranked conference opponents. Ultimately, the one D2 game that SC State played may be the reason they are at home this year since it did not give them enough FCS wins. Kennesaw State barely got to 8 D-I wins.

Preston: I really think South Carolina State deserved to make it. They were in the first 4 out and that was as the 3rd place MEAC team. Yes they shared the official conference title with A&T, but they lost to them by 2 and to the regular season champion in FAMU, who won’t be going to the postseason as a result of self imposed sanctions. Had they scheduled another FCS team instead of a D2 team I think the Bulldogs are likely playing this weekend, but this is a lesson to the MEAC if they want teams to be in the playoffs. It’s also a testament to how much the top of the conference improved this year with four teams at some point either being in the top 25 or receiving votes.

Ray: The name of the game is winning, and while Southern Illinois did that nicely down the stretch, the Salukis proved the importance of each game. They put themselves into consideration for a spot by their play on the field in recent weeks, but their fate was also in the hands of the selection committee … not a place you want to rest the fate of your season. I defer to the committee on this one.