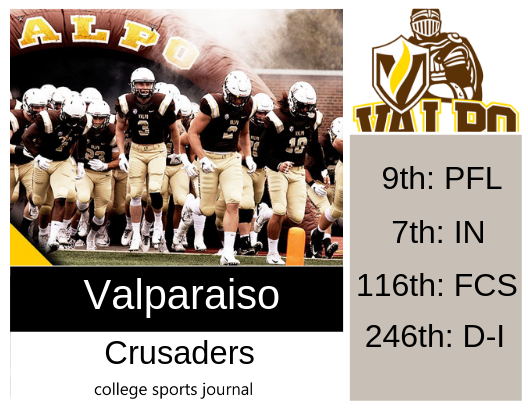 2018 In A Sentence: The Crusaders regressed to a 2-9 overall mark (2-6 PFL) after posting a 6-5 mark in 2017 and also lost its head coach Dave Cecchini in the offseason, who left to be the head man at Bucknell of the Patriot League.

Key Player: Valpo may have regressed in the win column but it was not for a lack of talent on special teams. RS/WR Bailey Gessinger was recognized as an all-PFL second team for the third straight season. Gessinger enters his senior season with four career kickoff returns for touchdowns, one shy of tying a PFL record. Two of those returns came last season, allowing Gessinger to equal his own program watermark for kickoff return TDs in a single season with two. He also added another score receiving and 215 yards catching the ball.

Fearless Prediction: Former Coach Cecchini left rather late in the offseason–moving in late February and the Crusaders looked within a PFL rival in Dayton’s 11-year defensive coordinator Landon Fox. Under Fox’s wing, Dayton boasted the second-best scoring defense in the PFL in 2018. The Crusaders will need this kind of improvement (Valpo gave up 35.6 points/game last year) to better its two-win total but will have to do it with half of its starters (5 offense, 6 defense) lost from last year’s team. Expect a similar season as last year with 2-3 victories.