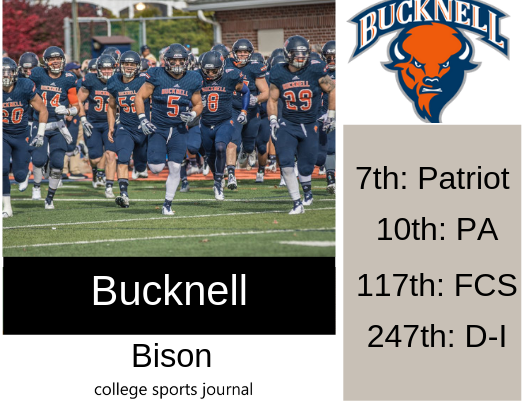 2018 In A Sentence: A brutal 1-10 season saw the end of the Joe Susan era at Bucknell, with the Bison hiring former Valparaiso head coach and Patriot League assistant coach and player Dave Cecchini to take over the reins of the program. The lone highlight for the Bison was a surprising 19-16 win on the road at Holy Cross.

Biggest Shoes to Fill: Both top tacklers from last season’s team, S Joe Lauro and CB Bryan Marine, graduated last season, and they will not be easy to replace. Both combined for 4 interceptions and leave a very big experience gap in Bucknell’s secondary

Key Player: RB Chad Freshnock was the team leader in 2017 in rushing yards (525) and all-purpose yards (583), but was never the feature back in the offense. In 2018 he was expected to be the go-to guy on the Bucknell offense, but a preseason injury caused him to miss the season (and may have been the source of most of Bucknell’s offensive woes last year). Cecchini is known for his pass-intensive attack, something different than Bucknell has experienced the past few years, but Freshnock, now healthy, will certainly be a big part of Cecchini’s plans. But in what capacity?

Fearless Prediction: Bucknell’s hire of Cecchini, who took a moribund Valparaiso program and gave the Crusaders their first winning season in over a decade, tells the world that the Bison are in rebuilding mode in 2019. A brutal out-of-conference schedule against Temple, Sacred Heart, Villanova, Princeton and Towson is very daunting, but it will give the Bison a chance to adapt to Cecchini’s system and perhaps make some noise in Patriot League play. A November 9th home game vs. Lehigh, Cecchini’s alma mater and site of some of his best work as an assistant coach, is already circled on the calendar for both programs.