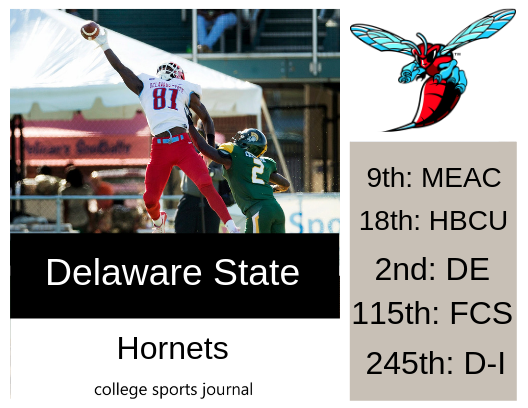 2018 In A Sentence: After a brutal 0-7 start to the Rod Milstead era, the Hornets made a big turnaround by the end of the year, winning three of their final four games to salvage a 3-8 season. One of the wins, however, came against hapless USCAA school Virgina University of Lynchburg.

Biggest Shoes to Fill: RB Brycen Allyene was the Hornets’ leading rusher last season with 646 yards rushing and 5 TDs, and Milstead will have to replace all of his production on the ground.

Key Player: P Fidel Romo-Martinez was one of the FCS’s best punters in 2017, ranked 4th in the sub-division with a 44.8 yard average, but a mid-season injury ended last year’s all-American campaign. This year, this punter with an aspiration to play on Sundays will look to remind people why he was so highly touted a few years ago.

Fearless Prediction: Coach Milstead was a member of three conference title DSU teams from 1988-1991. This is his first head coach job after being an assistant at North Carolina Central and brings 8 years of experience as an offensive linemen in the NFL, where he was a member for he 1995 Super Bowl champion San Francisco 49ers. While at DSU, he paved the way to a leading running attack in all of the FCS in 1990 and hopes to bring that kind of offense with him. DSU plays two FBS opponents from the MAC in Buffalo and Western Michigan so surpassing the two wins from last year may be a stretch.