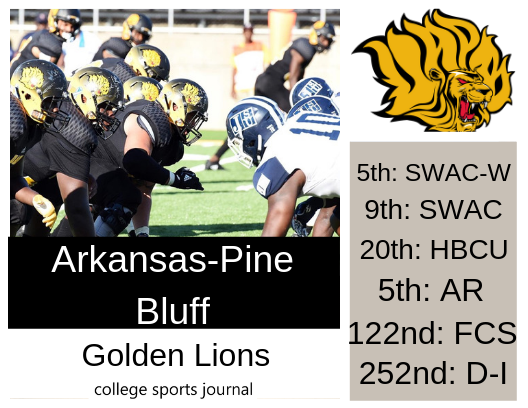 2018 In A Sentence: Cedric Thomas, former Golden Lion player and defensive coordinator at Alcorn State, took as head coach of the UAPB program last year. The end results were similar as recent years – another 2-9 season – but there was some promise, as four of their losses were by a touchdown or less.

Biggest Shoes to Fill: It’s not common that you see a special team player in this space, but P/K Jamie Gillian wasn’t just any ordinary kicker. In 2018, the “Scottish Hammer” led the SWAC with an average of 42.9 yards per punt to rank 13th in FCS football with a net average of 37.5 yards. More than a fourth of his punts — 19 of 71 — traveled more than 50 yards, and 27 of his punts were downed inside the opponents’ 20-yard line.

Key Player: DE Jalen Steward had a great individual season last year on the Golden Lions defensive line, notching 16 tackles for loss and 7 sacks. A real disruptive force, he can be a player to build around on defense.

Fearless Prediction: With an easier overall schedule than last season, the Golden Lions can reasonably hope to improve from last season’s 2-8 record. Whether they can improve significantly from that will depend on whether coach Thomas can shore up the defense enough to keep UAPB opponents out of the end zone.