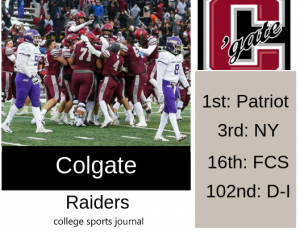 2018 In A Sentence: When your only losses are to a bowl-bound Army team and the eventual FCS National Champions North Dakota State in Fargo, that’s the very definition of a great year. Add to that a “Big Red Blanket” defense that only allowed touchdowns in 6 of the 12 games they played – that’s the definition of an amazing year.

Biggest Shoes to Fill: The Colgate machine did graduate some important pieces to their 2018 success. RB James Holland, who finished his Raider career on a high note with over 1,000 yards riushing, and LB T.J. Holl, who averaged 9.4 tackles per game, forced three fumbles and registered 3 1/2 sacks, were very big contributors that now need to be replaced. Key Player: Why aren’t Colgate fans more worried about two huge contributors graduation? Because two all-Patriot League players, QB Grant Breneman and DL Nick Wheeler, return and should be positioned for exciting senior campaigns. Dual-threat QB Breneman led the Patriot League in pass efficiency (133.6), completing 126-of-204 pass attempts for 1,605 yards and six touchdowns with four interceptions in 10 games during the 2018 season, while Wheeler finished second in the Patriot League in sacks (9.0) and tackles for loss (17.0), while compiling 51 tackles in 12 games. Losing Holland and Holl doesn’t ease the number of headaches for opposing coaches to worry about.

Fearless Prediction: Though there are some important pieces to replace, there is plenty coming back for Raider Nation to expect another Patriot League title, especially with so many other league teams experiencing turnover at head coach and/or programs in various states of rebuilding. The outcome of the Raider’s early out-of-conference schedule will indicate whether Colgate will be built for another FCS playoff run – home games versus Villanova and Maine and road games vs. Dartmouth, William and Mary and Air Force. It’s a typically brutal Colgate out-of-conference schedule that should set them up perfectly for Patriot League play.