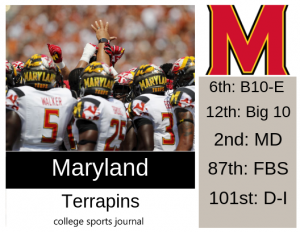 2018 In a Sentence: After an 4-3 start, interim head coach Matt Canada was not offered the full time position at Maryland, and Mike Locksley, who worked under Nick Saban at Alabama, took over a program who went 1-4 in their last five games to crash out of bowl eligibility.

Biggest Shoes to Fill: Last year’s starter, QB Kasim Hill is not returning to the Terps. He was going to not play during the 2019 season anyway with a torn ACL, but with Maryland moving towards a run-heavy offense, he was listed in the transfer portal this summer.

Key Player: QB Josh Jackson, a transfer from Virginia Tech, and QB Tyrell Pigrome are in a heated battle to take over the quarterback position following Hill’s transfer, with it not being out of the realm of possibility both QBs will see time rotated under center. Either signalcaller will be expected to effectively manage Maryland’s running game, which averaged over 200 yards per game last year and will be critical to any success the Terps have on offense.

Fearless Prediction: Unless there’s another surprise win over a nationally-ranked team (hello, Texas!) it’s hard to see Maryland, who is in somewhat of a rebuild, getting to bowl eligibility. There are a lot of holes to plug in the defense, but if they do and Pigrome or Jackson works out, they can get there.