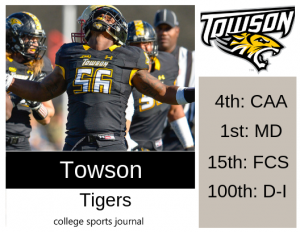 2018 In A Sentence: Towson found a quarterback to start the 2018 season and that made all the difference. QB Tom Flacco, brother of the NFLs’ Joe Flacco, took the reins and led the Tigers to a 7-5 season and an FCS playoff appearance. After a strong start, Towson fell off, losing 4 of their last 5 games including an inexplicable playoff loss at home to Duquesne.

Biggest Shoes to Fill: Towson returns a lot of talent on both sides of the ball. But one player who graduated was LB Diondre Wallace. A local product and a team captain, Wallace garnered 3 rd team All CAA honors after his senior season after amassing 89 tackles. It is difficult to replace an intangible like leadership, so Wallace will be missed on the Tiger defense.

Key Player: QB Tom Flacco is one of the top quarterbacks in all of the FCS, not just the CAA. Flacco finished fifth in Walter Payton Award voting in 2018 and is on the watch list to start 2019. The honor was rightly earned as Flacco filled up the stat sheet with 3251 yards passing and 28 touchdowns. But doesn’t just have a famous brother – Flacco led the Tigers in rushing as well with 1005 yards and another four touchdowns. (That’s something Joe was never able to do as a member of the Delaware Blue Hens or the NFL’s Baltimore Ravens.) He does need to cut down on the turnovers, having thrown 11 interceptions in 12 games, but expect to hear his name among the top players in the FCS all season long.

Fearless Prediction: Towson returns a lot of talent, especially on offense. This will be a tough team to stop throughout the year and they look like a solid playoff team and could even challenge for the CAA title. Can they avoid the stumbles that stopped them last year?