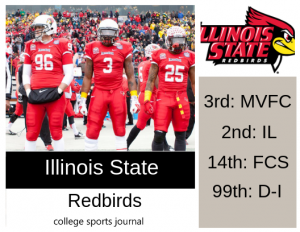 2018 In A Sentence: Illinois State began the season 5-1, including a 35-19 FBS win at Colorado State, but lost their next four games to finish just 6-5 (3-5 MVFC) to miss out on the playoff for the second straight season.

Biggest Shoes to Fill: WR/PR Spencer Schnell led the Redbirds and the MVFC in receptions with 65. He ranked second in the league with 872 receiving yards and nine touchdowns in being named an All-MVFC first team member. He was also the primary punt returner for the team, averaging 8.7 yards per return. He was signed following a rookie camp by the NFL’s Tampa Bay Buccaneers this past spring.

Key Player: RB James Robinson should be one of the running backs in the FCS level. He was named to several All-American squads and was a first team All-MVFC performer last year. He led the conference with 1,290 rushing yards, which ranks sixth on the ISU single-season rushing list. He also tied for second in the league with 12 rushing touchdowns. With QB Brady Davis also back, the key to the Redbird offense will be some consistancy and the best will be to have a share of running and passing between these two performers.

Fearless Prediction: The Redbirds return eight starters each on offense and defense so on paper the Redbirds seem to have all the ingredients to finish on the top half of the tough MVFC. The key on defense will be to stay just as they were last year (just over 20 points/game) and key on offense is to have balance of the run and pass. All indications show that this will happen and the Redbirds will see the postseason this year for the first time in three years.