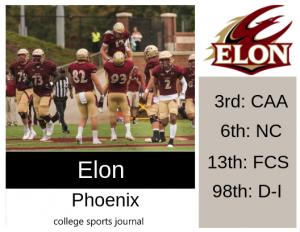 2018 In A Sentence: Elon had a strong start to their season, including handing James Madison its first home loss in three years. However, the Phoenix encountered some key injuries on offense which led them to lose their final three games of the season. Elon made back to back playoff appearances for the first time in school history.

Biggest Shoes to Fill: RB Malcolm Summers had a great start to his season. Unfortunately, he was injured in the victory over James Madison and did not play again the rest of the season. When he was in there, Elon boasted one of the most potent run offenses in the FCS. Summers ran for 591 yards and three touchdowns in the games he played. His injury paved the way for the next man up, but Summers will be missed in the Elon backfield this year.

Key Player: When Summers went down, that gave extensive experience to RB Jaylan Thomas as a freshman. In 2019, Thomas will be the main guy in the Elon offense. In partial action in 2018, Thomas ran for 761 yards. He should eclipse 1000 this year and will garner votes for CAA player of the year.

Fearless Prediction: Coach Curt Cignetti is off to James Madison. But he laid a great foundation for the Phoenix moving forward. If QB Davis Cheek can stay healthy, this team will be in the mix for the CAA crown and a playoff berth in 2019.