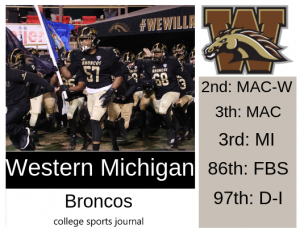 2018 In a Sentence: Western Michigan looked to have a promising season in Coach Lester’s second year but dropped four of its final five games including a Famous Idaho Potato Bowl loss to BYU to finish 7-6 overall (6-2 MAC).

Biggest Shoes to Fill: WR Jayden Reed seemed like the prototypical successor to the now NFL star Corey Davis. The Freshman All-American recorded four 100-yard games in his first season of collegiate action, hauling in eight touchdowns.. Instead of continuing his career in Kalamazoo, however, Reed elected to sit out 2019 and transfer to Michigan State. WR Keishawn Watson also decided to depart as a grad transfer and go to Appalachian State after being the top second option so finding receivers will be the key this fall to fill in for these losses. Key Player: QB Jon Wassink is key to the Bronco offense to just stay healthy. Last year’s team was 6-2 in the first eight games when he started and as mentioned earlier just 1-4 when he was not. In this limited time, he still threw for 1,994 yards and 16 touchdowns. The key for Coach Lester, however, is that he does have capable back-ups this year should Wassink miss some time in Illinois transfer Alex Mussat.

Fearless Prediction: Despite the losses at receiver, the Broncos return most other starters from last year on both sides of the ball. Also, the Broncos have recruited to a similar method to what former and current Minnesota P.J. Fleck did in his time (remember the undefeated regular season 2016 team that just lost in the Cotton Bowl). The talent is there for the Broncos to make a run at the MAC this year but may fall just short. WMU will still get a decent bowl game and finish with more than the seven wins it had last year.