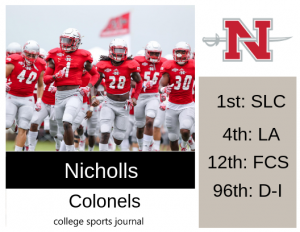 2018 In a Sentence: Nicholls started the 2018 season off strong with an upset win over FBS Kansas in overtime. The Colonels would go on to have an excellent season, finishing 9-4 and winning the Southland Conference outright. The Colonels won their opening round playoff game before falling in the second round to eventual national runner up, Eastern Washington.

Biggest Shoes to Fill: WR Damion Jeanpierre, Jr. led the Colonels in receiving yards in 2018. His 850 yards came on just 44 catches for an average of 19.3 yards per catch. Jeanpierre also scored three touchdowns in 2018. His ability to stretch the field will be missed in 2019, but the Colonels do return WR Dai’Jean Dixon, who led the team with 53 catches and seven touchdowns.

Key Player: Dual-threat QB Chase Fourcade enters the 2019 season as one of the top players in the FCS. Last year, Fourcade threw for 2930 yards, ran for 659 yards and accounted for 34 total touchdowns; numbers that garnered him Southland Conference player of the year. Nephew of former Ole Miss and New Orleans Saints QB John Fourcade, Chase is among the 25 athletes on the Walter Payton Award watch list to start 2019.

Fearless Prediction: Nicholls looks like the top dog in the Southland Conference again, thanks to the presence of Fourcade. If all the other parts around him come together, this is a team that could potentially make a very deep run in the FCS playoffs – perhaps all the way to Frisco.