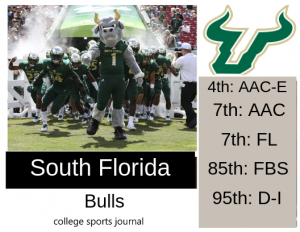 2018 In a Sentence: The Bulls began 2018 with seven straight wins to equal a program record but the wheels came off in the second half of the season with USF finishing with six straight losses including a Gasarilla Bowl loss to Marshall to finish 7-6 overall (3-5 AAC).

Biggest Shoes to Fill: LB Khalid McGee, a former safety, leds USF and ranks second in the conference posting 9.5 tackles per game. His 111 tackles last year are 8th on the USF season charts and just the 15th 100-tackle season in program history. He was named to the All-AAC second team after last year and will be missed on defense. Key Player: LB Nico Sawtelle seemed like the key to the Bulls success and failure last year. After he had started 18 consectutive games, he missed the last seven with a neck and shoulder injury. The senior looks healthy coming into this fall and will be key to turning around a defense that overall allowed a whopping 446 yards per game. Keeping him healthy looks to be the key to turning around the Bull defense and will look to make-up for the loss of McGee.

Fearless Prediction: After what was believed the biggest collaspe in college football history with winning its first seven and losing its last six games, USF will try to rebound to the winning ways this season. The offense should be fine with the leadership of QB Blake Barnett and RB Jordan Cronkrite but the defense needs to improve to be considered in the top half of the AAC. Look for that to happen and the Bulls to finish with 8-9 wins and go to a more lucrative bowl game.