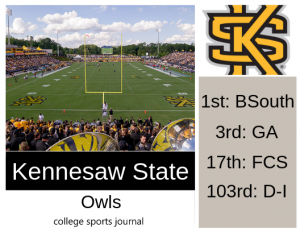 2018 In a Sentence: Kennesaw State again rolled through the Big South unbeaten and finished the season 11-2. The Owls nearly beat FBS Georgia State on opening weekend and then won every game on their schedule until they met South Dakota State in a game on a sloppy field in the quarterfinals. The Owls won what many considered to be the most entertaining FCS game of the 2018 season: a 5OT thriller against Jacksonville State in a game played at Atlanta’s SunTrust Park in a final score of 60-52.

Biggest Shoes to Fill: Kennesaw State graduate 17 of its OGs after the 2018 season, but none were more important than QB Chandler Burks. Even though he was the quarterback, Burks impact was felt mostly with the use of his legs. An average passer, Burks only completed 53% of his career passes with 33 touchdowns and 12 interceptions. But as a runner, Burks excelled. He amassed 56 career rushing touchdowns and 2772 rushing yards.

Key Players: It is always hard to follow a school legend, but that’s exactly what QB Daniel David is going to have to do for Kennesaw State. Luckily for the Owls, David has seen the field throughout his college career, appearing in 25 games. David got valuable experience when Burks went down in the quarterfinals against South Dakota State, nearly bringing the team from behind to win the game before ultimately falling.

Fearless Prediction: With the graduation of so many players, Kennesaw State is one of the more difficult teams to predict for the 2019 season. The Owls should still be the class of the Big South, but it’s a big question mark as to where they stand in the overall FCS lexicon. The most critical question is whether Daniel David’s heroic comeback attempt against South Dakota State was a fluke or the sign of the emergence of a new Chandler Burks.