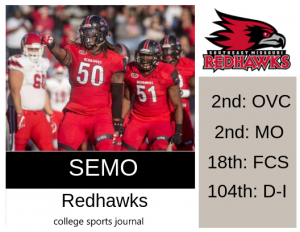 2018 In A Sentence: Southeast Missouri State had an excellent 2018, going 9-4 overall and making the second round of the FCS playoffs. The Redhawks took down perennial OVC goliath Jacksonville State and had the inside track on the OVC title before falling on a returned squib kick against Murray State.

Biggest Shoes to Fill: The void left by RB Marquis Terry will be a tough one to fill for the Redhawks in 2019. As a senior in 2018, Terry averaged 5.9 yards per carry, gaining 1229 yards and scoring 14 touchdowns. Terry was the workhorse back for SEMO, with nearly 3 times as many carries as the next highest running back total on the team. Key Player: The Redhawks have a strong key player on each side of the ball. On offense, its QB Daniel Santacaterina who threw for 2844 yards and 28 touchdowns. He needs to cut down on the 11 interceptions, but he should keep the offense humming. On defense, the Redhawks return the defending Buck Buchanan Award winner in LB Zach Hall. He was a monster last year, recording 168 tackles and four interceptions. Hall should have an equally successful senior season in the middle of the SEMO defense.

Fearless Prediction: Led by Santacaterina on offense and Hall on defense, SEMO looks like a team that will be a factor in the FCS playoffs this year with a shot to take the OVC title from Jacksonville State. A quarterfinal appearance this year is not out of the question.